Why Vladimir Putin's India visit is of great significance

That India and Russia held their 19th annual summit last week testifies to the highest level attention that both countries give to their bilateral relationship.

For Russia, the relationship with India is not the most important and for India, ties with Russia are not uppermost in foreign policy priorities. Yet, the annual summits have been held without break, which is exceptional. This suggests that for Russia, the bilateral relationship is worth nurturing because, apart from direct bilateral benefits, it gives to Russian foreign policy a strong Asian dimension. The esteem that the Indian leadership shows for President Vladimir Putin contrasts with his demonisation by the West.

For India, a strong relationship with Russia is important for maintaining a balance in the country’s foreign policy. With the transformation of India-US relations and defence becoming a major pillar of their strategic partnership, maintaining a high level of understanding with Russia has become even more important.

Our ties with Russia are multi-pronged and consist of formats such as the Russia-India-China dialogue, BRICS and SCO in which the West is absent. At a time when the global situation has become uncertain on all fronts, an atmosphere of Cold War is re-emerging and Russia and China have been designated by the US as its strategic adversaries, it is important for India to not be pulled in a direction that limits its diplomatic options. India has to maintain an appropriate level of engagement with all major powers to mark its commitment to multilateralism that is currently under siege.

The just-concluded 19th summit has demonstrated that India will pursue its ties with Russia in the light of its national interest and will not dilute them under external pressures of the moment. For this reason, attention was focused on whether India would go ahead and sign the S-400 contract despite the threat of sanctions under America’s CAATSA legislation.

The Modi government has shown courage and self-respect by concluding the S400 contract, though it has chosen to give it minimum projection by referring to it very laconically in the joint statement and excluding it from the list of agreements signed by the two sides in the presence of the two leaders.

If negotiations for the Ka226 helicopter contract had reportedly reached an advanced stage, it might have been politic to have signed the contract now rather than later because this too is a “significant transaction” that comes within the purview of CAATSA and would require a US presidential waiver eventually.

One should not expect each summit to produce eye-catching outcomes. The summits should be seen as stock-taking of ties, maintaining a forward momentum in the relationship, removing bottle-necks where necessary and laying the groundwork for future growth. In this context, the joint statement mentions the informal summit in Sochi in May this year as “reflecting the deep trust and confidence between Prime Minister Modi and President Putin” and an agreement to continue the practice. 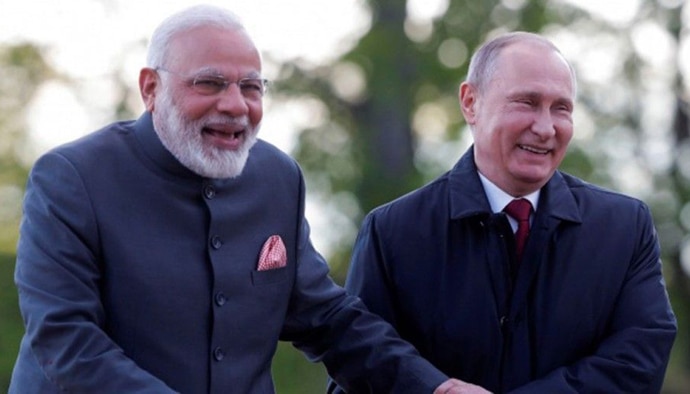 The just-concluded 19th summit has demonstrated that India will pursue its ties with Russia in the light of its national interests. (Photo: PTI)

Trade remains a persistent weak point in India-Russia relations and unless trade exchanges are expanded bilateral ties will lack an all-around solidity. Bilateral trade increased by 20 per cent in 2017, crossing $10 billion, but this figure is by no means impressive. The goal of two-way investment of $30 billion by 2025 has, according to the joint statement, become an achievable target. Most of this investment is in the energy sector, which is an area of considerable potential.

According to our Ministry of Petroleum and Natural Gas Russia is today our prime destination for investments in the hydrocarbon sector. Four Focus Sectors: Energy, Digital Economy, Startup and Infrastructure have been identified for cooperation. Support to promoting bilateral trade in national currencies has been reiterated in the joint statement, and this is important because of US sanctions on Russia.

On Afghanistan, the joint statement excludes any mention of negotiations with the Taliban, an issue on which the two sides differ, though the existence of external safe havens and sanctuaries (an allusion to Pakistan) is mentioned. The Iranian nuclear deal is supported with a call “for all issues related to the Iranian nuclear programme to be resolved peacefully and through dialogue” (allusion to US threats to Iran).

On terrorism, while avoiding any mention of Mumbai, Uri or Pathankot attacks or naming jihadi organisations in Pakistan targeting India (consistent with Russian reticence on the subject), there is condemnation of “all kinds of state support to terrorists including cross-border terrorism” (another allusion to Pakistan).

India has agreed with Russia in opposing the “imposition of unilateral coercive measures not based on international law” which is a veiled reference to US/EU sanctions on Russia. A little surprisingly, India has yielded to Russia’s support for China on the issue of a Regional Security Architecture “in the regions of Pacific and Indian Oceans” (not IndoPacific), with an emphasis that all new initiatives (the Indo-Pacific concept) are based on multilateralism and are “not directed against any country”.