A few issues have historically dogged the India-Sri Lanka relationship.

In October 2014, a Chinese submarine docked at Colombo with the Japanese Prime Minister due the next day. The Indians had objected vociferously. This time, when the Indian Prime Minister was due to visit Sri Lanka on May 11, 2017, the Sri Lankans received a request from China for a port call by one of their submarines.

With Sri Lanka hugely in debt due to Chinese investments at Hambantota Port complex, possibly the Chinese wanted to put across the message that they call the cards at Colombo now. The Sri Lankans displayed the spine that they have by declining the request.

Prime Minister Narendra Modi’s visit, preceded by the visit of the Sri Lankan Prime Minister to India, earlier this year, has apparently given the India-Sri Lanka relationship a more stable platform. Modi’s low profile Vesak Day visit to Sri Lanka achieved a lot more even without displaying a clutch of MoUs signed. The Chinese dragon failed to torpedo the Indian elephant’s port call.

For India, Sri Lanka is vital and for Sri Lanka, India is no less. Barely 12 nautical miles apart, any nation that dominates Sri Lanka can actually choke the sea lanes to India. For Sri Lanka, the story is not too different, though in another context.

The country’s cultural and ethnic connects with India are umbilical. The predominantly Buddhist nation, a religion that traces its roots to India, also has an ethnic Tamil diaspora that has deep linkages with Indian people in the state of Tamil Nadu.

India, by virtue of its proximity, is also its natural trading partner. Should the tiny island state need any assistance, India is again geographically best positioned to respond. Beyond that, both are democracies. Up to 75 per cent of transhipment traffic at Sri Lankan ports is also Indian.

A few issues have historically dogged the India-Sri Lanka relationship. The long history of Tamil insurgency and the overwhelming use of force by the Sinhala-dominated state, especially during the final phases of the civil war, has left a deep scar on the psyche of the Tamil population in India.

No political party, be it in power or in opposition in the Indian state of Tamil Nadu, will accept New Delhi hobnobbing too much with Colombo till reconciliation in Sri Lanka is fully achieved. As such, dispensations at Delhi are often guarded in their outreach to Colombo.

The other major impediment is the small island state viewing India as a sledge hammer that can, egged further by their umbilical linkage with the Sri Lankan Tamil diaspora, act against Colombo’s interests. In the bargain, Sri Lanka has had strong relationships with extra regional partners, with China in the lead during the tenure of the last president, Mahinda Rajapaksa.

To limit the narrative to the recent past, the relationship dipped when Rajapaksa was in power. The Chinese were seemingly making brazen inroads. The best example was the development plans for Hambantota. The Hambantota port was to be developed as a deep sea port. The project included an international airport, a cricket stadium, hundreds of kilometres of roads and other ancillaries. Most of it was funded by the Chinese government as loans or Chinese FDI.

Initially, Sri Lanka had offered the development of Hambantota to India, however, the Indians had not found the project viable. The Indian scepticism has since proved right. The entire project is floundering.

By the time the new Sri Lankan president Maithripala Sirisena came to power, it was mostly a case of the projects having gone too far to be rolled back, leaving Sri Lanka at the cusp of a debt trap. Perhaps, that is what the Chinese wanted. 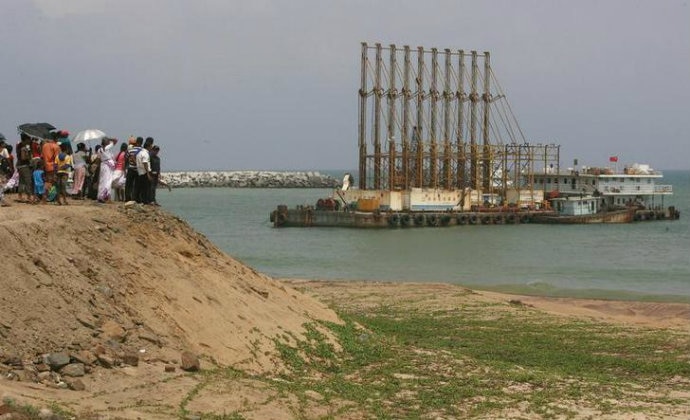 The Hambantota port was to be developed as a deep sea port. Photo: Reuters

Both the Sri Lankans and the Chinese are now trying to retrieve the situation. China had asked for 1,600 acres of land to build an industrial zone. A financial district is also being built in Colombo on 269 hectares, with 110 hectares reserved for the Chinese. Up to 80 per cent of Hambantota has been handed over to the Chinese on a 99-year lease. Both governments have formed a committee to salvage the project.

With such huge assets being handed over to the Chinese, an Indian security expert, Brahma Chellany, opines, “From a Chinese-financed Sri Lankan project, Hambantota is becoming a Chinese-owned and Chinese-run enclave in the Indian Ocean.”

Sri Lanka has also backed the Belt and Road Initiative. Of course, the Sri Lankan Prime Minister during his earlier visit to Japan had stated that, “We want to ensure that we develop all our ports, and all these ports are used for commercial activity, transparent activity, and will not be available to anyone for any military activity.''

Sri Lanka has now offered the Trincomalee Port for joint development to India. The Sri Lankan port minister wants some of the Hambantota projects to be moved to Trincomalee. The projects now planned at Trincomalee include an India-partnered sugar factory and a Pakistan-partnered cement plant. Funds allocated for Hyatt Hotel in Hambantota are also being diverted to Hyatt Colombo.

Indian Oil Corporation will also partner in the development of the oil tank farm at Trincomalee. An old 2003 agreement between the two countries is being revisited. The farm has 99 oil tanks and Indian investment in the project is bound to be viewed as more strategic than purely commercial.

Beyond Hambantota, the Sri Lanka-China relationship is quite deep-rooted. The Chinese supply a wide variety of arms and equipment to Sri Lanka.

Smaller nations often play a balancing game when they have two regional powers casting a shadow on them and Sri Lanka is no exception. Chinese domination of the island would alarm Asia-Pacific countries as much as EU and the US. The sheer propensity of investments from China in Sri Lanka could tip the scales in their favour, with Sri Lanka sliding more and more into a hapless debt-ridden position. However, Sri Lanka has experienced the fallouts of debts being incurred through its Hambantota experience and would surely be more careful now.

Sri Lanka now opting for India as a partner to develop the Trincomalee Port is a way of counterbalancing China. However, an island state barely 268 miles at its maximum length may find it difficult keeping two antagonists - a dragon and an elephant - satisfied in their designated nooks on the same small island. It’s a tightrope walk at best.

Indians can also not match the funding that China can pour into Sri Lanka. The way ahead lies in India patching together a responsive consortium to include the Japanese, Australians, EU and US, and possibly a few more Asia-Pacific countries to meet Sri Lanka’s needs.

Sri Lanka, in turn, has to reflect mature strategic thinking and disallow greater Chinese penetration in its economy or provide them potential military assets that could further underscore the Chinese nine dash line.

The Maritime Silk Route of the Belt and Road initiative is designed to reinforce the objectives of the nine dash line. Sri Lankan priorities have to remain fiscal consolidation, debt reduction, ability to exercise strategic freedom of choice in geopolitics and social cohesion with Tamils being integrated into the Sri Lankan society fully, as equals.

Also read: Only India can pull Sri Lanka out of crisis

Post your comment
#China, #India-Sri Lanka Ties
The views and opinions expressed in this article are those of the authors and do not necessarily reflect the official policy or position of DailyO.in or the India Today Group. The writers are solely responsible for any claims arising out of the contents of this article.