If opinion poll is right, Modi doesn't need development promise to win UP

India Today-Axis pre-election findings may embolden BJP to push Hindutva in the state.

The India Today-Axis opinion poll estimates BJP will win 170-183 seats out of 403 in Uttar Pradesh if the Assembly elections were held today. Though short of majority, it’s not bad news for the party forecast to emerge as the largest party in Assembly.

The smell of victory, so tantalisingly close in UP, must taste sweet to Modi and the BJP president Amit Shah. 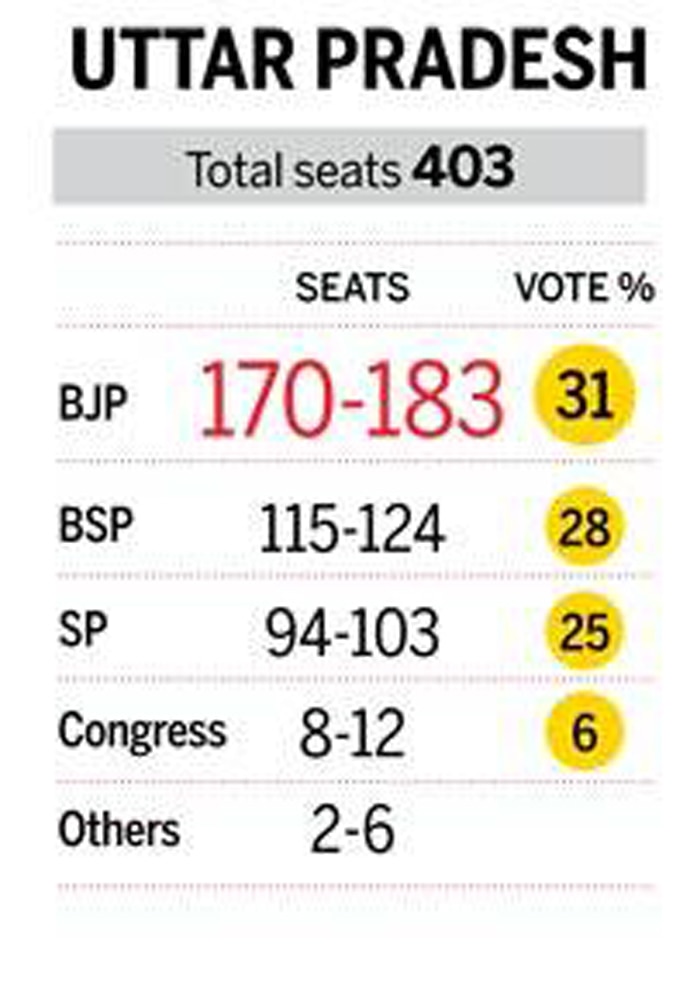 However, another set of statistics is stacked up against the India Today-Axis Poll feel-good data for BJP. That’s bad news for the Modi government.

India’s industrial growth as measured by the Index of Industrial Production (IIP) during the first five months of the current fiscal year is the worst since the economic crisis of 2008. The manufacturing sector accounting for over 75 per cent of the IIP index, contracted by 0.3 per cent in August as compared with expansion of 6.6per cent in August last year, according to Central Statistics Office (CSO) numbers released on October 10. Will the Modi-Shah charisma of 2014 work once again in UP if the government’s performance on the economic front were to become an issue? Photo credit: PTI

The manufacturing, which has received so much attention of the government, its Make in India campaign remain are a matter of serious concern, the RBI data released recently has said.

The concern over the banking sector NPAs has further increased. The volume of bad loans has gone up from $121 billion in December 2015 to $138 billion in June 2016. This is despite the previous RBI governor Raghuram Rajan’s hard work on trying to reduce the bank’s toxic loans.

Even worse, the unemployment rate is at a five-year high. According to Labour Bureau survey report that came out last month, about 77 per cent of households either don’t have a salaried income or a wage-earning member.

Why this is indeed bad news for the government is because Modi swept to power on the promise of providing jobs to the unemployed youth. His development plank was the single most important factor that influenced the country’s burgeoning youth population to vote Modi into power.

On the day India Today came out with the UP poll survey, the Global Hunger Index (GHI) described India’s hunger situation as “serious”. India ranks 97 in a list of 118 on GHI. And the rival Pakistan is placed at 107, just 10 notches below.

The GHI tells us India and Pakistan that sabre-rattle nuclear weapons like one talks of the menu on the dinner table can’t even provide two morsels of food to their children. The scourge of hunger and malnourishment has become worse in the country.

Curiously, the RSS chief Mohan Bhagwat made an indicting revelation in his Vijaya Dashami speech on October 11. He referred to an internal survey of 9,000 villages in “Madhya Bharat” to find out the extent of inequality on various parametres.

Will the BJP gloss over those issues — sliding industrial growth, declining jobs, ballooning bank NPAs, problems of hunger and malnourishment and unacceptable social discrimination — during the UP election campaign? Those were the very issues Modi had so eloquently raised during the 2014 Lok Sabha campaign and reaped rich dividends.

And will the Modi-Shah charisma of 2014 work once again in UP if the Modi government’s performance on the economic front were to become an issue?

No, because there is not much to show. BJP, therefore, has to move away from basic economic and social issues. It has to rustle up issues that appeal to its core constituencies and issues that generate emotional response.

The India Today-Axis Poll has gathered that 91 per cent of respondents in UP feel the prime minister has emerged as a strong leader after the September 29 surgical strikes. They termed the strikes across LoC as “very good”.

About 67 per cent of the respondents in UP said the surgical strikes had helped the BJP politically. The poll indicates the BJP’s strategy of making political capital out of the Army’s actions, constant Pakistan bashing and raising the pitch of ultra-nationalist discourse is paying off. The BJP would feel vindicated for allowing its workers to put up posters depicting Modi as Lord Ram.

Whether the party can maintain the tempo around the euphoria over surgical strikes until the elections, still six months away, would be agitating Amit Shah and team.

What looks almost certain is the BJP is ready to say goodbye to Modi’s development plank, which brought him to power and won BJP a staggering 73 out of 80 seats in UP.

Midway through the NDA’s tenure, the utility of development as an election plank is over.

#Amit Shah, #Modi government, #India Today-Axis poll, #UP Assembly Polls
The views and opinions expressed in this article are those of the authors and do not necessarily reflect the official policy or position of DailyO.in or the India Today Group. The writers are solely responsible for any claims arising out of the contents of this article.