India Today Group Editor-in-Chief talks about how the Supreme Court verdict on Ayodhya is a closure and an opportunity to move ahead, in the November 25 edition of the India Today Magazine.

The wounds of a nation, if allowed to fester for long, become a danger to the lifeblood of the country. India has had many such wounds. My constant gripe has been that they are kept open forever and are not allowed to heal. The government is saddled with commissions of inquiry which drag on endlessly while the courts are clogged with cases of national importance that need to be settled. Fortunately, we are now witnessing a phase where chapters of long-pending issues are finally finding closure. You may or may not agree with the final decision, but at least the country can then move on. Sometimes, the opportunity cost of not taking a decision is greater than that of taking one. The abrogation of Article 370, which had been hanging fire since Independence, was one such decision. The latest is the landmark November 9 decision of the Supreme Court on the Ram Janmabhoomi-Babri Masjid issue. It has brought to a close a series of cases older than democratic India itself.

In a unanimous judgment, the five-judge constitution bench of the Supreme Court gave the site to the Hindu plaintiffs to build a temple and a separate five-acre plot to the Muslim side to build a mosque. The judges reasoned that while both parties had competing rights over the disputed site in Ayodhya, lawyers presenting the Hindu argument provided better evidence of continuous worship than those arguing on behalf of the Muslims. The legal gymnastics and fairness of this judgment will be debated for years to come, but it has been greeted by the country with general acceptance and a sigh of relief. The government has ensured that there is no display of triumphalism, and calm has been maintained. The judges seemed to have looked beyond the law and passed the judgment keeping in mind the national interest of maintaining peace and harmony in today’s charged atmosphere.

This was an issue which had divided the nation and led to the deadly Bombay bomb blasts of 1993—just three months after the demolition of the Babri Masjid—which left 272 dead and saw the collaboration of a Mumbai mafia don with the ISI of Pakistan. The vexatious Ayodhya dispute has shaped the Indian political landscape from the mid-1980s. There is no political party that has not dipped into this well of controversy for its self-serving interests. 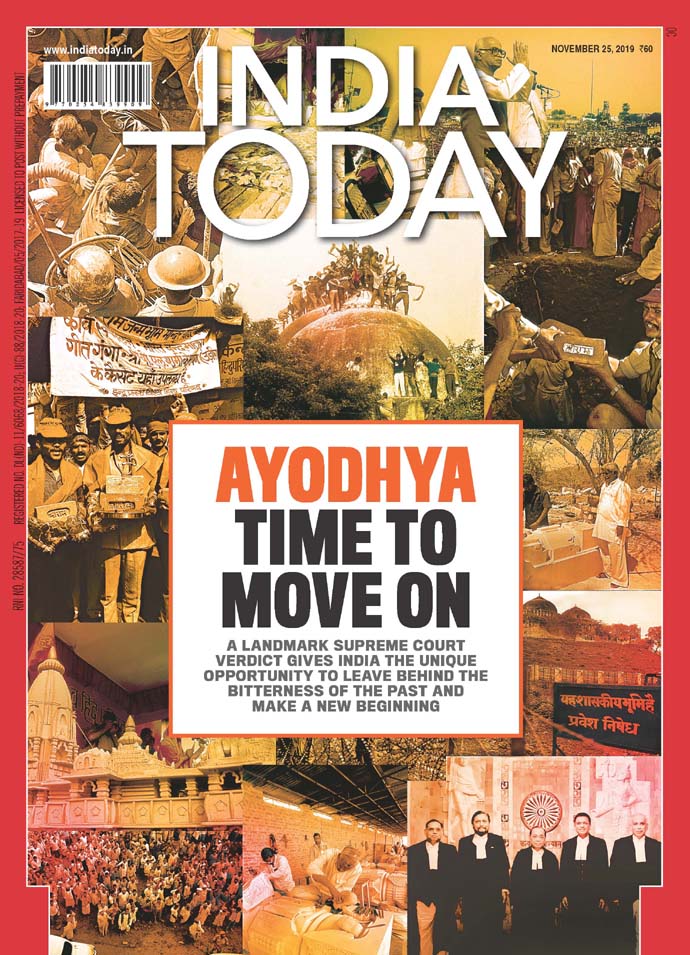 India Today November 25 cover, Time to move on: A landmark Supreme Court verdict gives India the unique opportunity to leave behind the bitterness of the past and make a new beginning.

The Congress, with Rajiv Gandhi at its helm, swept to power in 1984 after the assassination of Mrs Indira Gandhi, with an unprecedented majority, reducing the BJP to a measly two seats. However, two years later, at the peak of his power, Rajiv Gandhi made the politically fatal mistake of opening the locks of the disputed structure, which the Hindus claimed was the birthplace of Lord Ram. It was the most cynical display of vote-bank politics and proved to be a key turning point in the Ayodhya saga. Pilloried for Muslim appeasement when he brought in The Muslim Women (Protection of Rights on Divorce) Act, 1986, overturning the Supreme Court verdict a year earlier on the Shah Bano case, the then PM decided to appease hardline Hindus. However, it was the BJP, which backed an ongoing agitation for a temple to be built where the Babri Masjid stood in Ayodhya, that reaped the political windfall. The party saw its tally rise to an astounding 85 seats in the 1989 general election. It chose to support the V.P. Singh-led government but used the leverage to promote the cause of the temple and excite its Hindu vote-bank. It was to counter the BJP’s mandir push that Singh played his Mandal card, paving the way for caste-based reservations and changing Indian politics forever. The Ayodhya issue, thus, had a repercussion on the Indian polity beyond the temple issue. But this was not the end. The agitation for the temple continued with the rath yatra of the then BJP president L.K. Advani in 1990, which culminated in the shameful demolition of the Babri Masjid in 1992, followed by sectarian violence across the country. Given its bloody history, getting a peaceful closure on the issue is an important landmark in the march of Indian history.

India Today has done 10 cover stories on the issue since the 1980s. With the sole exception of our 1993 cover story where we invited eminent citizens to submit creative solutions for the site, each cover story has been one of gloom and foreboding. Our 11th cover story, ‘Time to Move On’, compiled by our bureau, examines the various facets of the Supreme Court’s landmark decision, particularly why the court chose its course of action, and the road ahead. Hopefully, this will be our last cover story on the issue.

We cannot, as a nation, be wasting our attention and energy in righting the wrongs of history. We should not only learn from the past but also learn to live with it. As a developing country, we have far more pressing and monumental issues to deal with.

We still have over 250 million people living in extreme poverty, which is the largest in the world, and we have 37 per cent, or 287 million, of the world’s adult illiterates in the world. India is home to one of the largest populations of malnourished children in the world—two out of three child deaths in the country are due to malnutrition. A recent survey shows that 75 per cent of our households do not have drinking water on their premises and about 84 per cent rural households don’t have access to piped water. India is replete with such a shameful statistics. On top of this, our first quarter GDP growth at 5 per cent this year has been the lowest in six years, while unemployment is at an all-time high. These, and not the intractable disputes of history, must be the problems the world’s largest democracy must urgently focus on solving. India has not only to Move On but also has to Get Going on our real problems.

You cannot drive a vehicle by looking only into the rear-view mirror.

#Rammandir, #Supremecourt, #Ayodhyaverdict, #Ayodhya
The views and opinions expressed in this article are those of the authors and do not necessarily reflect the official policy or position of DailyO.in or the India Today Group. The writers are solely responsible for any claims arising out of the contents of this article.