Can India-US naval partnership counter China in the Indian Ocean?

The bonhomie between the nations at the diplomatic level has led to strong defence relations between the armed forces, especially the navy.

The rise of India and China has brought about a situation that has never been witnessed in modern Asian history - the rise of two home-grown maritime powers.

India and China have both been continental powers whose great ambitions and energy needs have led them to the seas of Asia. Strategists and scholars of both countries have talked about the growing rivalry between the two Asian giants, and with the rapid naval expansion and modernisation of both the Indian Navy and People's Liberation Army Navy (PLAN), the maritime rivalry is poised to intensify.

Nowhere is this rivalry between India and China more evident than in the Indian Ocean, where the Chinese navy forays into India’s "backyard", and with continuing US dominance over global commons, a strategic triangle has formed in the Indian Ocean.

The launch of a second Chinese aircraft carrier and the plan to construct a third aircraft carrier gives credence to the already strong belief among naval strategists that China is looking to strengthen its blue water capabilities. This also alludes to the speculation that China’s aircraft carriers are being built with the Indian Ocean in mind, as aircraft carriers have much less utility in the Pacific, where the Chinese approach has been to deny sea access through anti-access and area denial strategies.

Aircraft carriers can bolster Chinese power projection capabilities beyond its near seas and especially in the Indian Ocean, where China is concerned about its strategically important sea lanes of communications (SLOC), on which China’s sea borne energy supplies are depended.

Furthermore, aircraft carriers, with their mighty size and humanitarian assistance and disaster relief capabilities, can act as vital instrument of Chinese soft power in the Indian Ocean region, where the Chinese are investing in maritime infrastructure and boosting their diplomatic clout among the nations.

China has been steadily increasing its naval footprints in the region and with its naval base in Djibouti coming up, it has secured a foothold for its navy in the strategic Gulf of Aden.

The ascent of Chinese naval power has serious ramifications for the Indian Navy which has its own geostrategic interests in the Indian Ocean, which it views as its own "backyard", or to use 20th century geopolitical terms, its "sphere of influence".

In the international fleet review conducted by the Indian Navy off the coast of Visakhapatnam in 2016, India’s naval prowess was at full show. Indian naval vessels along with ships from 52 countries including China participated in the region, which highlighted the rising stature and clout of India’s naval might.

The international fleet review was seen as a stern reminder to China that, apart from US naval presence, the Indian Navy is the "preeminent naval entity" in the Indian Ocean. Furthermore, the theme of the fleet review was “United through Oceans” - emphasising the concept of global commons and freedom of navigation, which is opposite of the Chinese expansionist approach in the South China Sea.

In the face of existential threats emanating from land-based powers of Pakistan and China, the navy was relegated to a mere support service and was commonly known as "the Cinderella service". As such India was never in a position to fill the naval vacuum that had existed in the Indian Ocean after the decline of the British Empire and its "east of Suez" declaration.

The US navy ultimately took the role of the British Royal Navy and became the dominant naval entity in the Indian Ocean. A relatively similar situation may emerge again as the power of the US navy slowly wanes in the Indian Ocean and this time the Indian navy is well positioned to be the principle net security provider in the region.

The official document regarding Indian maritime strategy, issued in 2007, was titled "Freedom to Use the Seas: India’s Maritime-Military Strategy" and in 2015 the Indian navy has gone a step further and taken a more assertive stance in the maritime strategy document titled "Ensuring Secure Seas: Indian Maritime Security Strategy".

The "primary" area of interest for the Indian navy was extended taking a south-west trajectory to include the south western Indian Ocean and the Red Sea. The "secondary" area of interest was also enlarged to fit two additional choke points - the Mozambique Channel and Ombai-Wetar Straits.

This highlights the Indian navy’s focus on free shipping lanes and freedom of operational manoeuvre. With 90 per cent of India’s trade being carried through sea, which accounts for approximately 42 per cent of GDP, the Indian navy is well justified in "ensuring secure seas". 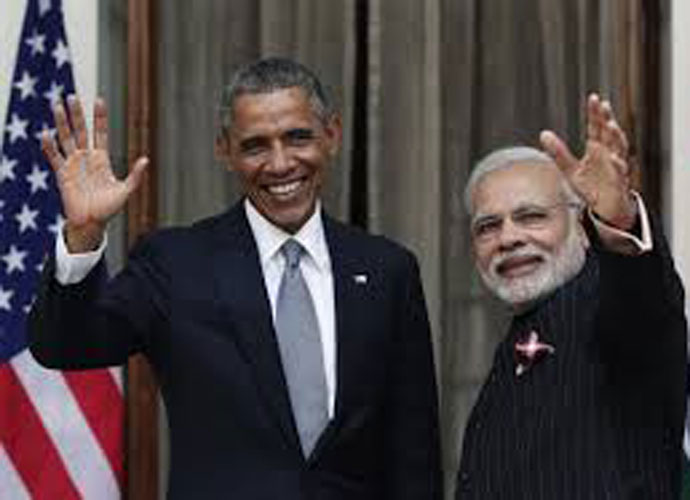 During former US president Barack Obama’s visit to India in 2015, a joint statement, where particular attention was laid on peaceful resolution of maritime territorial disputes, was issued. Photo: Reuters

India’s dependence on energy imports through the seas is also a serious concern which motivates the Indian navy to take a leading role in maintaining freedom of navigation in the Indian Ocean and to provide net security in the region.

If our navy is looking to shoulder more share of international maritime security, then the US navy is seeking to share its maritime responsibility through "cooperation" with other regional navies. In a maritime strategy document titled "A Cooperative Strategy for 21st Century Sea power", the US navy brings its focus on the "Indo-Asia-Pacific" region, a term being increasingly used by US policymakers which seeks to merge the entire Pacific with the Indian Ocean.

The document seeks to reiterate United States’ agenda of "rebalancing" the Asia-Pacific by countering China’s revisionist maritime strategy and to dehort China’s expansionist tendencies in Asia through multilateral and multifaceted engagements.

As one of the chief challenges it mentions "anti-access/area denial (A2/AD) capabilities that challenge our global maritime access…" - a clear reference to China’s A2/AD policy in the Pacific. One of the chief elements in the strategy document is the emphasis on "cooperation" with other regional navies in creating a “global network of navies” to address the security challenges.

In a meeting of Indo-US Defence Joint Working Group held in 2007 at New Delhi, it was reported that both sides discussed the rapidly increasing Chinese naval presence in the Indian Ocean. During former US president Barack Obama’s visit to India in 2015, a joint statement, where particular attention was laid on peaceful resolution of maritime territorial disputes and "freedom of navigation", with specific reference to the South China Sea, was issued.

Similarly in 2016, during Prime Minister Narendra Modi’s visit to the US, a joint statement in which the issue of securing maritime domain and settlement of territorial disputes through peaceful means was highlighted.

Due to the assertive stance of China in east Asia and its increasing naval presence in the Indian Ocean, the US and India had both been continually vocal about freedom of navigation and have been concerned about the operational manoeuvrability of their respective navies.

A rising great power with revisionist tendencies like China, which has already staked its claim for almost the whole of South China Sea, is now increasingly looking towards the Indian Ocean and integrating blue water capabilities in its PLN.

The "string of pearls" and the OBOR initiative manifest an ominous Chinese presence in the Indian Ocean region for the Indian security establishment and is a matter of great concern for Indian as well as the US navy.

The bonhomie between nations at the diplomatic level has led to strong defence relations between the armed forces of nations, especially the navy. One of the most noticeable features of the Indo-US maritime co-operation is the Malabar naval exercises. Japan, Australia and Singapore have also participated in the exercises, with Japan being added as a regular member of the exercise alongside India and US.

According to some Chinese scholars, the Malabar exercises are a precursor to a more formal multilateral anti-China naval grouping. How good the argument holds is a matter of further speculation, but in spirit, the Malabar exercises can be seen as a foundation upon which further Indo-US naval co-operation can be built.

In the field of anti-submarine warfare (ASW), there has been significant cooperation between the two countries. In May 2016, Indian and US authorities discussed building strategies on how to keep track of Chinese submarines making inroads into the Indian Ocean.

This joint formulation of strategies hints at how the two navies are aware of the benefits of Indo-US naval synergy in countering China. Last year, US defence secretary Ashton Carter and defence minister ManoharParrikar in a joint statement vowed to deepen Indo-US military ties and the focus was on ASW co-operation. One of the key areas for future ASW co-operation will be naval aviation, where both the Indian and US navy operate Boeing P-8 maritime patrol planes.

One of the overriding elements upon which the nature and scope of future Indo-US military cooperation hinged upon was the signing of the Logistics Exchange Memorandum of Agreement (LEMOA). Last year, the signing of LEMOA, which allows both countries to access each other’s facilities for repairs and supplies, between India and US can be seen as an agreement just short of a formal alliance.

It is one the four "foundational agreements" that the US enters into with its defence partners. The signing of LEMOA has opened doors for further Indo-US maritime synergy and co-operation in the Indo-Pacific.

With the signing of LEMOA and the existing maritime co-operation, it can be said that a naval entente has emerged between the two navies in the Indian Ocean. In the coming years, an increasingly confident Indian navy, which aims to be the "net security provider" in the Indian Ocean, will seek to ensure "secure seas" in partnership with the US navy, which is looking for a "co-operative strategy" to rebalance China in the Indo-Pacific.

Without entering into any rigid alliance framework, a tactical understanding has formed between India and the US. If the tactical entente indeed strengthens, then in the coming years it may define the true scope and meaning of US "rebalancing" in the Indo-Pacific.

Also read: Why China is a challenge India has never seen before

#Indian Ocean, #China, #India-US naval alliance
The views and opinions expressed in this article are those of the authors and do not necessarily reflect the official policy or position of DailyO.in or the India Today Group. The writers are solely responsible for any claims arising out of the contents of this article.

The writer is pursuing a PhD in international relations from Pondicherry University and is the co-founder of www.nationalviews.com.