‘Do you have rapists in uniform?’: Why SC asked Indian Army this haunting question

It is a question that will loom large on the moral hold of the Indian Army on the democratic republic. Supreme Court on Tuesday, April 18, asked the armed forces, “Do you have rapists in uniform?” in relation to amicus curiae Maneka Guruswamy’s scathing report on atrocities perpetuated by members of the armed forces in Manipur, hiding behind the controversial Armed Forces Special Powers Act (AFSPA) in the state.

“It seems that the Constitution has not reached Manipur”, the amicus curiae said regarding the “excess of the armed forces”, “delayed justice”, “gross misuse” of AFSPA, as well as “state’s disinterest, the impunity enjoyed by the armed forces” while presenting her report on human rights violations by the armed forces in Manipur.

The Supreme Court has now called for a Special Investigative Team (SIT) to probe three cases involving alleged fake encounters by the armed forces, including one involving rape of a 13-year-old girl in Manipur. Attorney general Mukul Rohatgi, who has been defending the Army in a series of matters pertaining to 1,528 cases of alleged fake encounters in Manipur over the last 20 years, was asked to present names on the SIT panel on Wednesday. The SC bench comprising Justices Madan B Lokur and UU Lalit has asked the Centre to furnish names of five DIG-level officers of the CBI or officers of the rank of additional director general of police as part of the SIT to probe the cases.

It must be noted here that only days back, AG Rohatgi had filed a curative petition in the Supreme Court to repeal the latter July 2016 order saying FIRs should be filed in cases of alleged fake encounters even in AFSPA states like Manipur. In relation to the "human shield" episode that has come to fore from Kashmir Valley, Rohatgi has, in fact, commended the Army saying it was the only way to prevent bloodshed in a stone-pelter dominated area of Budgam.

Now, with the SC asking the direct and scathing question to the Indian Army, on whether it has “rapists in uniform”, what was hitherto only been a part of efforts to document alleged instances of ongoing human rights violations and sexual abuse by the armed forces, has made its entry in the official annals of history.

As AFSPA remains a bone of contention in the national discourse, alarming instances of its alleged abuse have hitherto gone unchecked by the government and the Army itself. The usual defence is that conduct of the military and paramilitary personnel in "conflict states" cannot be held to the same scrutiny as law-and-order issues in normal states, and must be given leverage to make the split-second decisions that could be life-saving in a larger context.

However, the apparent disregard for the constitutionally granted right to life of those in the insurgency-ridden states, the conflation of the civilian and the militant, the use of human shields, fake encounters and extra-judicial killings, sexual abuse, rape and murder of women – have all been painstakingly documented in various quasi-official narratives, as well as by human rights organisations such as Amnesty India, Human Rights Watch, among others.

The 16-year-long hunger strike by Irom Sharmila was in response to the excesses under AFSPA, particularly the incident on November 2, 2000, when an Army battalion opened indiscriminate fire at a bus-stop in Malom, Manipur and killed 10 young men in the process.

The July 8, 2016 judgement by the same bench – Justices Lalit and Lokur – was a response to precisely these allegations, when it sought details of the 1,528 cases of alleged fake encounters in Manipur over the last two decades. SC said that the security forces cannot claim complete immunity from criminal action after using excessive force.

Rape and the armed forces

It’s tragic that security personnel serving under AFSPA were granted immunity despite the Justice Verma Committee report, which was in response to the December 16, 2012 Delhi gang-rape and murder case (Nirbhaya incident), suggesting that the succor be taken away. 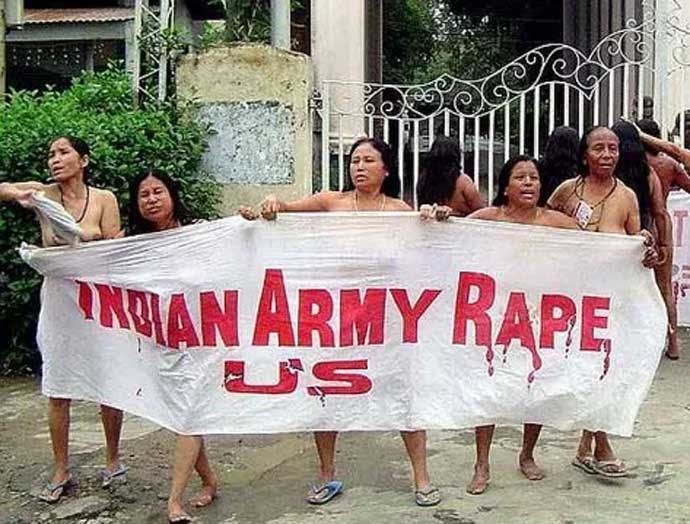 In 2004, Manipuri women disrobed themselves in public and held out the banner that said 'Indian Army Rape Us'.

But sexual assault committed against women in conflict zones was not included in the firmed up anti-rape law that came in 2013. That the central government cast a blind eye to the continuing gendered exploitation of women and their bodily integrities in the conflict zones in the name of counterinsurgency was telling.

It is out of the simmering anger stemming from decades-long repression that in July 2004, 12 Manipuri women disrobed themselves in public and held out the banner that said “Indian Army Rape Us”. They were protesting the rape and murder of Thangjam Manorama on July 11 by members of the paramilitary Assam Rifles. The image has become an iconic one that succinctly echoed the helplessness and rage as well as the suffering of the women in Manipur at the hands of those who call them protectors of the Indian Union.

It seems that the Supreme Court has become the last bastion of democracy in contemporary India, as it grapples with extremes of human rights and sexual violations allegedly committed by its own military and paramilitary personnel.

Amicus curiae Maneka Guruswamy’s report on AFSPA’s excesses in Manipur and the petition by the Extra Judicial Execution Victims Families Association, document a host of cases in which alleged rape and murder against women was committed casually, as a part of teaching the insurgents a lesson by targeting locals.

The report details the case of a 13-year-old girl who committed suicide hours after she was allegedly raped by Army men, but there was no proper investigation into the incident by either the State or the Army.

Instead of course correction and introspection, it seems the Centre and the armed forces are more interested in brushing the accusations under the thick carpet of official apathy and public amnesia, while trying to strengthen AFSPA’s already expansive powers.

However, we hope that the grieving families of the murdered and raped victims get justice in the Indian court of law, eventually.