How lack of synergy is hurting Indian Army's hunt for weapons

The four lions atop the Ashokan pillar at Sarnath are an awe-inspiring emblem of the modern Indian state - a representation of an omnidirectional government.

But what if the four lions didn't talk to each other? You have what could be called the Ashokan Lion syndrome.

This syndrome comes to play in monolithic organisations with multiple stakeholders, all of them fiercely protecting their own turf.

The government and the gigantic ministry of defence with all its departments are where it could hurt the most.

In the armed forces, this syndrome results in each service gearing up to fight their individual wars. The joint doctrine of the Army, Navy and Air Force unveiled this April - is a joke.

Inter-service rivalry is not a uniquely Indian problem. The US air force, army and navy could not see eye for eye before they were forced to, by an act of Congress in 1986, producing today's jointly integrated US armed forces.

Multiplicity of vision is among the biggest hurdles to the government's Make in India programme which aims to create an indigenous defence industry.

A defence industry cannot take off without significant projects. These projects, in turn, cannot succeed without all stakeholders being on board. When all critical components of an organisation work in silos it leads to time, cost and wastage of national resources.

One of the many reasons for the delay of the indigenous Light Combat Aircraft "Tejas" is that the designer, manufacturer and user - the DRDO, HAL and IAF - were not on the same page from the start of the project.

A 2015 CAG report on project delays, over a decade behind schedule, recommends "close interaction and coordinated efforts among all the stakeholders involved."

Another example of this lack of synergy between agencies is playing out now. Last year, the Army began a third attempt in a decade to acquire a new combat rifle to replace its INSAS and AK-47s. 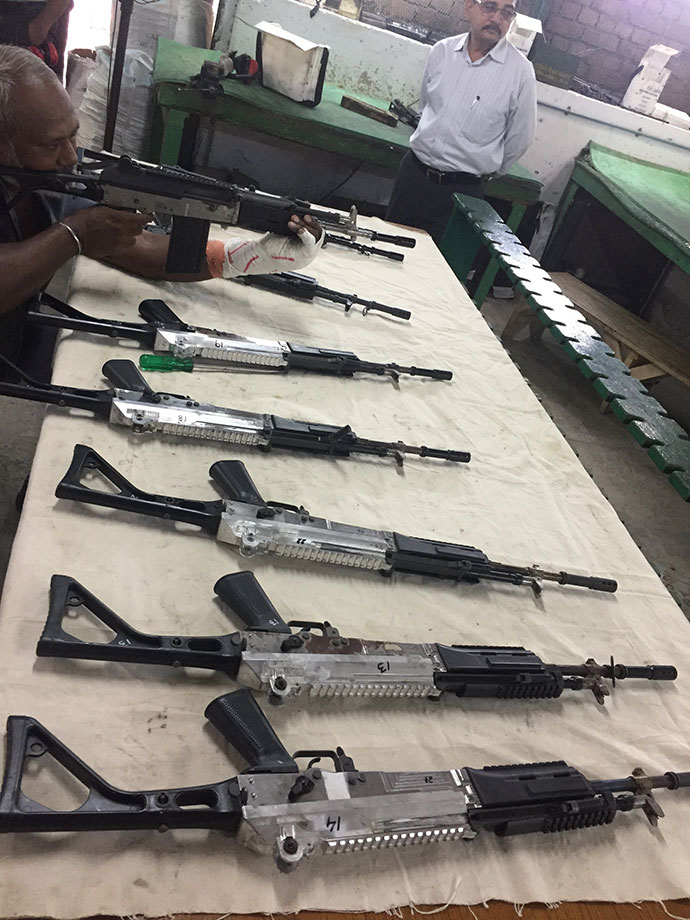 The Army floated a new Request for Information (RFI) for a weapon. A reliable assault rifle with day/night sights could give the infantryman the decisive edge over his adversary in a firefight, particularly when Indian Army soldiers are locked in almost daily firefights with terrorists in Jammu and Kashmir and the North-East.

The Rifle Factory Ishapore, one of two Ordnance Factory Board (OFB) factories making assault rifles, responded to the RFI by fielding a new rifle it had developed in less than six months.

There was some public shadow boxing between the Army and OFB last month when the latter released photographs to show that the Army had tested its new Made in India rifle and was happy with it.

The footage showed the DG, Infantry firing the rifle (somewhat unusually, from his hip). The Army, worried that this attention could short circuit its acquisition process, was harsh in its judgment.

The weapon, unnamed Army officials said, had issues of noise and recoil.

There is merit in both viewpoints. The OFB brimming with the confidence of having fielded a rifle prototype in record time, the Army not wanting to pre-judge a procurement race which it believes has only started.

But these viewpoints are symptomatic of a deeper malaise which I witnessed firsthand in visits to the DRDO's Armaments Research and Development Establishment (ARDE) and the OFB's Rifle Factory Ishapore over the past few months.

There are no Army personnel - serving or retired - in any of these facilities, to form a critical gap between design and practice, or participate in the project teams. (Ishapore has Army personnel from the Director General of Quality Assurance which certifies arms and ammunition after they are produced and ready for service induction).

Their only Army interface is over 1500km away, through the Infantry Directorate situated in the maze of New Delhi's Sena Bhavan. The needs of the soldier are caught between this Delhi-Pune-Kolkata triangle.

Over time, these distances have ossified into mutual contempt and have led to duplication of tasks. The Army does not believe in the DRDO or the OFB's ability to produce a reliable rifle. The OFB blames the DRDO.

An OFB chairman told me a decade ago that he was starting an in-house design centre because his organisation was getting the rap for DRDO delays.

Two years ago, the DRDO closed down a promising project for a Multi Caliber Individual Weapon Project (MCIWS) - an assault rifle which could be chambered to fire three types of ammunition types: 5.56, 7.62 and 6.8 mm - when the Army cancelled its bizarre order for a multi-caliber weapon.

Another excellent Made in India weapon is caught up in endless delays. The 5.56mm Joint Venture Protective Carbine (JVPC) designed by the DRDO and produced by the OFB as a replacement for the antique 9mm carbine, has been in Army trials over the past three years.

Even the first version of the carbine has not been inducted into service despite the DRDO's claims it meets all the service's trial parameters.

It hurts the effectiveness of the soldier on the ground engaged in daily operations. This year, Indian soldiers began receiving lightweight ballistic helmets. These are their first new items of personal equipment in nearly two decades. These 1.58 lakh helmets were swiftly ordered from a Kanpur-based private

These 1.58 lakh helmets were swiftly ordered from a Kanpur-based private defence manufacturer, MKU. They came in only after a 2015 furore over the lack of protective gear for soldiers and an intervention by then defence minister Manohar Parrikar.

However, there are success stories. Even five years ago, the Army's artillery arm was stuck in the same rut as the infantry directorate is in today. All its howitzer programmes were bogged down in lengthy acquisition procedures.

The artillery directorate put their heads down and worked with a unity of purpose with the DRDO, the OFB and private sector players like Tata Power SED and Bharat Forge.

The result was two incredible indigenous programmes - a 155x45mm howitzer forged out of the Bofors blueprints of the 1980s and a 155x52mm howitzer called the Advanced Towed Array Gun System (ATAGS) which made its public appearance during this year's Republic Day parade.

Clearly, miracles are possible when the lions start talking to each other.

Also read: Why Indian Army’s hunt for assault rifle under Make in India is no good