Acknowledging a soldier's hardships has turned into a yardstick to measure one's devotedness for the nation.

There are few things which binds all Indians together like cricket, Bollywood and our love for the country. The last one arguably has the most profound bearing on building a sense of nationhood among all citizens. A sense of belonging and oneness needs to be manifested in some form which ideally should be something more than our mundane daily realities of life.

One ideal that has the ability to arouse the collective passions in unison is patriotism. In order to realise this in its most spectacular form, the valorisation of those people who protect the frontiers of our nation instantly becomes the benchmark for measuring one's admiration for the same.

Over the years, the Indian Army has managed to carve a niche for itself by successfully projecting an image emblematic of extreme bravery and heroism. What follows is a rhapsodised reception given to the saviours of the country couched in the feeling of great respect.

Acknowledging their hardships of an increasingly unpredictable life on the borders has almost turned into a yardstick to measure one's devotedness and enchantment for the nation.

As we show a benign allegiance for this grand romanticising, especially at a time when a neat linearity of the Army-patriotism-nation is drawn, we need to be cautious of a few things.

Recently, the old bland jibe of how "students are wasting their talent and the taxpayers money by protesting at a time when our soldiers are dying on the border" was back in the news.

Also read: Ex-Armymen should have dignity, keep away from news channels 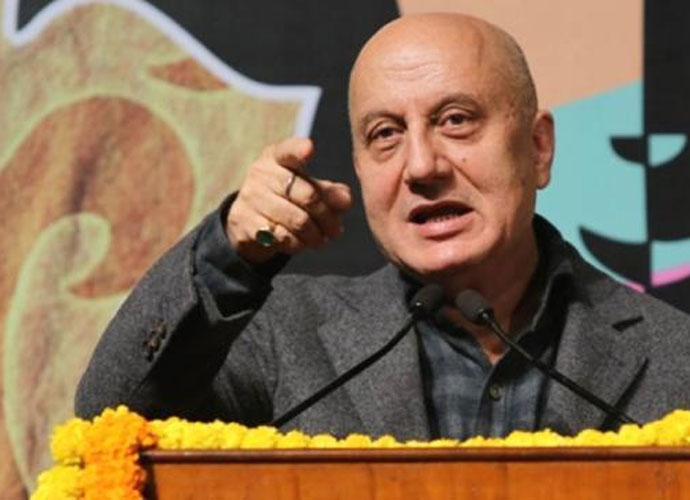 The credit for raking up this superfluous issue goes to the new face of Indian patriotism, Anupam Kher.

In his characteristic style of arguing in an emotive manner devoid of any reason or rationale, Kher succeeded in what is the ultimate rebut that one can throw at a dissenting voice - the indomitable spirit of the Indian Army.

Being fully mindful of their valiant sacrifices over the years, there is a need in my opinion to rethink the conjunction of Army and nation which we normally see through our lens of hyper-patriotism. The damage what people like Kher do is to give fodder for a mindless jingoism seeped in virtually revering these men for their work.

It seldom remains merely "work" as used in our everyday parlance but something which suddenly acquires a mass devotion for their superhuman attributes. The general tedious nature of "work" makes a dramatic transformation to a glamorous "duty" which leads us to being nothing but spellbound. This glorification of the Army has unfortunately become the dominant narrative in epitomising the highest levels of struggle while serving the country.

Such trivialisations take us miles away from certain basic, obvious facts of the nature of the job in the Army. Firstly, we fail to recognise that an Army man is a public servant just as other public servants of the country. Be it manual scavengers, railway gangmen and many others who work for the government, live a strenuous life where the nature of their jobs is equally hazardous and full of hardships and sufferings.

Equal dignity and respect, regardless of the nature of the work for all is what is needed at the earliest. Like the Army officers who unfortunately lose their lives while protecting the country, these other public servants have equally lost their lives on an unimaginable scale.

The reason for this single-minded applause for the Army is that they getting "killed" by someone else happens to be the enemy of your nation. On the other hand, the lives lost in a variety of public services is conveniently deemed as a natural death which is more often than not attributed to their own incompetence.

The possibility of the lack of efforts on the part of the state to provide any succour in terms of medication and health insurance gets deliberately pushed under the carpet. The life lost by an Army man is by getting "killed" and thereby becoming a "martyr"; the life lost of a fanatic espousing ultra-nationalist feelings gets termed as an "assassination" but a life lost of an ordinary public servant is only seen as a "death caused through unforeseen circumstances".

The prospect of there being a genuine case of an "institutional murder" is loathed upon. It is this segregation of the Army on one side and public servants on the other that has fuelled a needless discord who practically should be treated on the same pedestal through the prism of public service to the country.

Just because an alien force shoots down an officer on the border doesn't mean that his public service becomes much superior. In fact, that is exactly what the service demands as the incidents of border skirmishes are a fairly routine activity.

Without belittling their extraordinary service, we should all make concerted efforts on our part to keep the jingoistic elements in check. We should simultaneously keep in mind the plethora of arduous public service done everyday which fails to attract the shallow gaze of our much touted vigilant media.

To be complicit in this ostentatious performance of patriotism propounded by a few blinkered nationalists tarnishes the image of both the Army as well as the nation.

#Anupam Kher, #Nationalism, #Indian Army
The views and opinions expressed in this article are those of the authors and do not necessarily reflect the official policy or position of DailyO.in or the India Today Group. The writers are solely responsible for any claims arising out of the contents of this article.