Watch out! India set to have world's most fearsome artillery

Our surveillance, target acquisition and retaliatory capabilities are climbing a 'never before' path.

A few days ago, the arrival of the first two 155mm M777 ultra-light howitzers on Indian soil was hailed by the media. This was preceded by signing of a contract for the purchase of 100 self-propelled tracked 155 mm howitzers from L&T.

These moments are a source of pride for old gunners like me. Clearly, the transformative path of Indian artillery is a visible and palpable reality.

As things unfold we will have multiple capabilities across the tactical, operational and strategic spectrum. In future, artillery will be the mainstay of India’s combat capabilities, which will deter its adversaries. It will be one of the most fearsome artilleries of the world.

Our adversaries will have to seriously think before they attempt any misadventure. More importantly, we will be a truly “Made in India” artillery with the most critical technologies being indigenous.

The Make in India and self-reliance dream of Prime Minister Narendra Modi is being realised. The full import of this will be lost if one does not understand the larger picture.

The troika of 155 mm guns which are on the verge of induction into the Army have ranges varying from 30-38 km, giving us great reach. The 155mm 45 calibre Dhanush gun system being produced by the Ordnance Factory Board (OFB) is fully indigenised. It is undergoing user exploitation in the deserts and high altitudes.

It should go into full scale production soon. It is a cutting-edge top of the line gun system based on the Bofors platform. The 155mm 39 calibre M777 ultra-light howitzer, procured from the US on government-to-government basis, is a lightweight gun with high air and ground mobility.

It gives India huge operational and strategic capability in mountainous terrain. The gun is going to be assembled in the country by Mahindra Defence Systems. In the times to come, spares for this gun are poised to be made in India for the international market. That gives us the capability to make this gun fully in India in the future.

The 52 calibre tracked self-propelled K9 Vajra gun system is to be produced in India by M/s L&T in their Talegaon unit in collaboration with their Korean partner. For the first time, we will be building a major self-propelled gun hull in India. 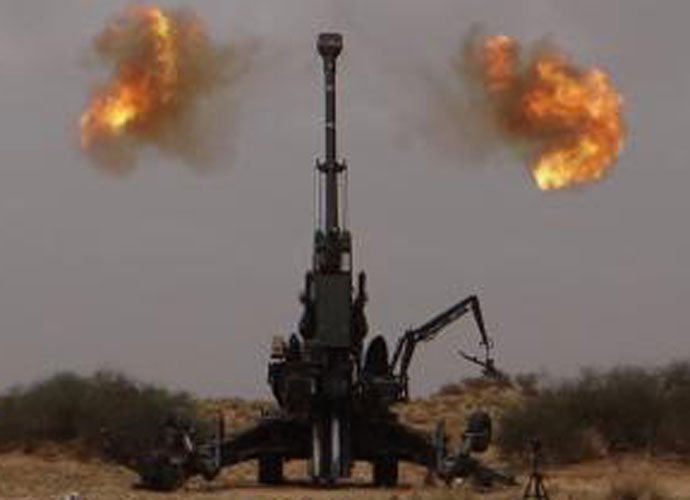 This gun will not only give major capability fillip to India’s armoured formations, but also to our defence industry. The ATAGS which is under development by the Defence Research and Development Organisation (DRDO) is showing a lot of promise.

Besides guns, tremendous strides are being made in rockets and missiles. Brahmos, the long-range cruise missile, is already being manufactured in India as a joint venture between India and Russia.

The strategic value of this system came from a reaction from China when their media raised concerns. Extension of range of the missile is being evaluated already through trials.

Again, very importantly, the DRDO has a strong programme underway to extend the range of this rocket. Initial trials have been encouraging. Both systems will change certain perceptions of our adversaries. They need to look out.

The “Swati” weapon locating radar (WLR) is a fully indigenised WLR- designed and developed by DRDO and manufactured by BEL. It has capabilities better than the US-made ANTPQ37. It has entered service and is doing well.

In the field of unarmed aerial vehicles (UAVS), the DRDO designed Rustam 2, a medium altitude long endurance aircraft, which has made its maiden flight. The Army has already started talking to IITs for design and development of short range UAVS. Results will be forthcoming in due course. Our surveillance, target acquisition and retaliatory capabilities are climbing a “never before” path.

The Make in India story of artillery will not be complete without mention of the strides made in net centricity. Thanks to the efforts of DRDO and BEL. The Shakti system, a major force multiplier which is wholly indigenous, is getting rapidly deployed. It integrates firepower sans barriers in a formation in a networked manner. Simultaneously, an indigenous battlefield surveillance system is poised for entry. Very few countries have these net-centric capabilities.

In fact, the Make in India story of artillery also encompasses self sufficiency of ammunition. Multiple sources have been identified and developed for indigenous procurement of fuses, shells and charge systems with high indigenisation content. The days when a letter of a COAS made an appearance in the media, bemoaning shortage of artillery ammunition, are of the past.

When viewed holistically, it emerges that in the Army, Indian artillery is spearheading the Make in India dream of our nation. The drive of Manohar Parrikar, former defence minister, needs a special mention. His clarity of thought and push ensured such capability enhancement. However, his absence is now hampering many programmes. It needs the attention of the PM.

Notwithstanding, we are proud of the Made in India artillery. Gunners are eagerly looking forward to their preordained role of destroying the enemy when needed. A net assessment of this story indicates that these developments herald an era of strategic independence for India.

They will enhance self-sufficiency, provide alternate options should an odd programme fail, save foreign exchange, create jobs and even have export potential in the future. Needless to say, they will add huge capability to national defence preparedness.

This capability has been realised due to the dedicated team effort of a lot of people - present and past. The defence ministry, the Army, defence PSUs, DRDO, OFB and the industry acting in unison as one team have had a huge hand in this story.

It was all about learning from mistakes and having faith that we can do it despite pitfalls; which were many. Last but not the least, what has been outlined is the tip of the iceberg.

For the full iceberg to surface, India needs to stay the course and guard against disruptive thinking if its dreams are to be realised.

Also read: India's defence is backward and unequipped when compared to China

#Howitzer guns, #Defence procurement, #Indian artillery
The views and opinions expressed in this article are those of the authors and do not necessarily reflect the official policy or position of DailyO.in or the India Today Group. The writers are solely responsible for any claims arising out of the contents of this article.