How Modi, RSS are turning the Indian abroad into a Hindutva bigot

Prime minister has emboldened Hindu upper-caste NRIs to turn India into a nation of theirs only.

Indian diaspora is considered as a "model" diaspora group in the West. Many large companies like Microsoft, Nokia and PepsiCo are being run by Indian-origin CEOs. As the Indian community in the West comes of age both in terms of numbers and financial capabilities, financial remittances have started flowing to India in a big way.

Last year, India received 70 billion dollars as remittances from its diaspora. Not only has India been encouraging financial remittance from its diaspora, but also taking its regular help to promote its interest in foreign capitals.

India is home to a vast variety of castes, tribes, communities, religions and languages. Thus, the Indian diaspora is a diverse community representing different regions, languages, cultures and faiths. To mobilise them as a group, increasingly, the role of religion is defining the notion of the Indian diaspora.

Not all Indians are Hindus, but almost all Hindus are Indians. So, unlike other world religions, Hinduism is an ethnic religion due to the strong sense of its origin and rootedness in India.

Indian diaspora is primarily taking the shape of Hindu diaspora, because most Hindus, no matter where they live, possess a deep, symbolic, special relationship to a spiritual homeland.

There are many religious minorities within overseas Indian communities, but due to the sheer size, a cultural form of Hinduism is being used to describe the Indian diaspora. This identity formation has not been limited to being cultural only, it has also been coloured with the political ideology of Hindutva.

Rashtriya Swayamsewak Sangh (RSS) has been directly involved in mobilising Indian diaspora in different parts of the world. The RSS demands unflinching patriotism and preservation of Hindu culture and its branches outside India are known as Hindu Swayamsewak Sangh. Its chapters in Europe and North America, whose mission is to promote Hindu culture, are active in recruiting support in various Hindu temples, which have been mushrooming in these parts of the world. 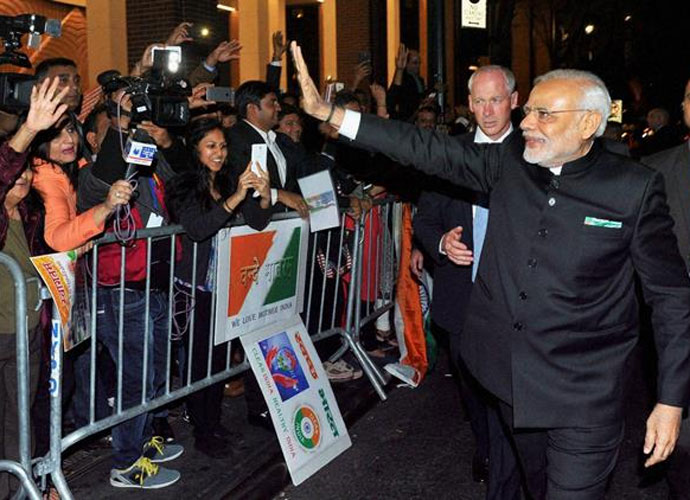 In spite of Hindus having huge numerical strength and control of political and economic power in India, diaspora groups have developed a myth of Hindus being an oppressed majority in a "secular" state. By playing the "victim" card that Hinduism is in danger from the "secular" forces in India, the diaspora is influencing the homeland politics to promote an aggressive form of Hindu nationalism.

Also read: I want to return home to India after watching Airlift

India's Prime Minister Narendra Modi is travelling around the world and publicly addressing large gatherings of Hindu diaspora and extolling them to be an ambassador of the home state. He has been urging them to contribute money, time and technical expertise for his signature programs, particularly the ones with high "Hindu" cultural significance, like "Namami Gange" project.

Indian embassies are being encouraged to support and promote activities organised by diaspora organisers with Hindutva leanings. Many of these organisers are also reporting to embassies against critical voices.

After the 2014 general election in India, there are worrying signs suggesting that intrinsic right to freedom of expression and religious practice is under threat in the country. This growing "intolerance" against minorities has however helped to further improve the popularity of Modi among the diaspora.

Not only religion, caste also permeates the Indian diaspora. In the face of discrimination in the host society, many become more fundamentalist in their tradition and caste is the part of that reactionary package. The strong urge to marry their sons and daughters within the caste very well shows the hold of caste identity present among the Indian diaspora.

Unfortunately, caste discrimination amongst the Indian diaspora is getting stronger as religious and ethnic identity become increasingly important. The powerful and majority group in Indian diaspora is not only active promoter of the Hindu right-wing political agenda, it also encourages the social discourse that favours the Brahmanic upper-caste values. Any discussion or debate on caste issue is seen as a taboo topic amongst the diaspora.

Dalits form a numerical minority within the Indian diasporic space, so upper-caste Hindus dominates places of worship and other cultural associations. In the UK, Dalit diaspora is even forced to worship in segregated temples.

In recent years, Dalit groups have started a campaign for a legal ban on caste discrimination in the UK, but upper-caste diaspora has successfully opposed it. Moreover, the upper-caste groups are providing fund and political support to RSS and upper-caste associations in India to demand revocation of country's caste-based job reservation policy, which wil lead to further social unrest in the country.

India is the world's largest secular democracy. The election of Modi as India's prime minister has emboldened Hindu upper-caste diaspora in their efforts to turn India into a nation of theirs only.

However, in a country of over 1.2 billion people, religious minorities, Dalits and indigenous groups make up roughly 50 per cent of the population. If this "model" diaspora succeeds in its objective, it can be disastrous for "Mother India".

Post your comment
#Hindutva, #RSS, #Narendra Modi, #Indian Diaspora
The views and opinions expressed in this article are those of the authors and do not necessarily reflect the official policy or position of DailyO.in or the India Today Group. The writers are solely responsible for any claims arising out of the contents of this article.