Why is Modi so in love with NRIs?

In his speech at Pravasi Bharatiya Divas, PM went on to say the diaspora 'represents the best of Indian culture, ethos and values'.

India’s Silicon Valley, Bangalore, is presently hosting the 2017 Pravasi Bharatiya Divas. On January 8, the second day of the convention, Prime Minister Narendra Modi addressed the overseas Indian community and thanked them for their support to his controversial fight against black money and corruption.

Since 2003, the ministry of overseas Indian affairs has been organising the event with much fanfare in India on January 9, to commemorate the return of Mahatma Gandhi as a pravasi from South Africa to India.

The Vajpayee government started this jamboree in 2003 in the name of celebrating the success of the nearly 30 million strong Indian diaspora. Officially, this carnival aims to help build bridges between the diaspora and the homeland by recognising and honouring the contributions of Indians living abroad in various fields.

The Vajpayee government’s interest in the overseas community was mainly designed to pay back some of its diaspora faithful who have been supporting RSS ideologies for a long time. The intention was purely based on political considerations.

After the fall of the Vajpayee government, the Congress-led UPA followed the ritual of organising the event more or less. Change in government brought some cosmetic changes, relating to whom to invite and who to honour in this event, but the Congress did not actively engage in mobilising the diaspora for its own political advantage.

This hands-off strategy adopted by the UPA vis-à-vis the Indian diaspora came to an end with Modi’s election as Prime Minister in May 2014. Modi is not leaving any opportunity to pander to diaspora groups to advance his political interest both at home and abroad.

In his keynote speech in Bangalore, self-proclaimed Hindu nationalist Modi has even gone to the extent of saying that the diaspora “represents the best of Indian culture, ethos and values”. He regards the diaspora as one of his strategically vital political assets.

A major section of the diaspora has been steadfastly supporting Hindu Hridaya Samrat Modi since the 2002 Gujarat riots. Many travelled to India to campaign for him in the last general election, while even more contributed heavily to his high-profile campaign.

There is no doubt that the diaspora’s contribution to legitimising Modi’s candidacy for Prime Minister and subsequent electoral victory in 2014 was critical.

After becoming PM, he has been travelling the world and publicly addressing the diaspora, extolling them to be ambassadors for India. He has been urging them to contribute money, time and technical expertise for his signature programmes, particularly the ones with high "Hindu" cultural significance, like cleaning up the Holy Ganga and the Clean India Campaign.

Coinciding with India’s economic growth and technological development, the overseas Indian community has taken a keen interest in the country for some years now. Remittances have been flowing to the home country in a big way, and overseas Indians (in spite of a slide in remittance flow from the Gulf due to low oil price in the last two years) are ahead of their Chinese, Mexican and Filipino counterparts in sending money back home. 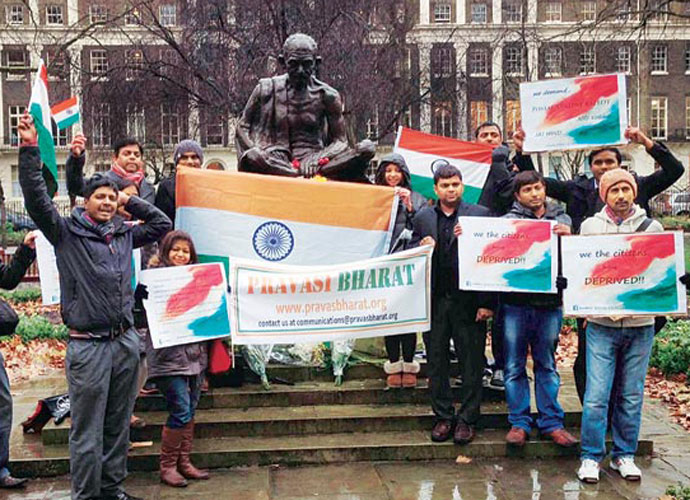 Beyond family-to-family remittances, the diaspora has also started investing in India in recent years. The new Indian economy with its growing technology and service sectors has encouraged the diaspora to invest heavily.

The contribution of the diaspora is not only limited to economic development, it is also playing a significant role in supporting the country’s foreign policy. Delhi is also regularly taking the help of its diaspora to counter negative publicity abroad; and the growing economic and political strength of the diaspora in their hostlands provides a helpful service to Indian diplomats abroad.

The overseas Indian community, whose financial muscle is growing, is also asking in return for social and political importance in India, following the path of the Jewish, Armenian, Irish and Ethiopian diasporas.

Its involvement has grown beyond just philanthropic activities in and around the villages of origin. The diaspora has started taking interest in electoral politics, supporting and financing its preferred candidates and political parties in elections.

The overseas community's invasive political activities have huge ramifications for democratic institutions of the home country. They live a relatively peaceful and richer life abroad in a democratic and multi-cultural environment and at the same time regularly and directly engage in influencing homeland politics to promote an aggressive form of ethno-nationalism and undermining the key political institutions of the home countries. A home country in turmoil ensures the enhancement of diasporic status.

A few years ago, I received a call from a high official of the Azerbaijan government to advise them on what they can do to make their diaspora as supportive of their home country policies as their Armenian counterparts. When I asked the official if Azerbaijan was willing to let the diaspora have similar influence on its domestic politics as Armenia has been almost forced to concede, the idea got a swift burial. Diaspora groups whether they are from Armenia or India are extremely selfish and their contributions come with a high price tag.

Unlike other world religions, Hinduism is an ethnic religion due to the strong sense of its origin and rootedness in India. With the help of that logic, the Indian diaspora has primarily taken the shape of Hindu diaspora, because most Hindus no matter where they live are likely to piety for "Mother India" and possess a deep, symbolic, special relationship to a spiritual homeland.

There are many religious minorities within overseas Indian communities, but due to the sheer number and domination, a cultural form of Hinduism is being used to define the Indian diaspora. This identity has not been limited to remain being cultural only; it has also been coloured with the political ideology of Hindutva.

In spite of having huge numerical strength and being in the control of political and economic power, the diaspora has developed the myth of Hindus being the oppressed majority in a "secular" state, and is spreading the belief that Hinduism is under constant attack.

By playing the "victim" card that Hinduism is in danger from "secular" forces in India, the Hindu diaspora is in constant endeavour to influence India’s domestic politics to promote an aggressive form of Hindu nationalism.

While some might argue that the Hindu diaspora may be a strong and decisive influence in shaping religious identity politics in India, others might argue that identities are simply reproduced in diaspora communities. However, there is no doubt that the diaspora’s devotion to Hindu identity influences identity engineering in India.

Many of them have long become a "major powerbase" and source of funding for the Hindu brand of politics in India. The spectre of this growing contribution of Hindu diaspora groups to the Sangh Parivar’s Hindutva Project is a serious threat to the idea of a secular, inclusive and democratic India itself.

The time has come for India to take a pause and think through carefully the serious ramification of allowing the diaspora to directly engage and influence its domestic politics.

The diaspora might be an effective instrument for Modi and RSS to promote their Hindutva agenda in the country, but India, which is spending large sums of money in organising the Pravasi Bharatiya Divas, will be the ultimate loser.

#Pravasi bharatiya divas, #Indian Diaspora, #Narendra Modi
The views and opinions expressed in this article are those of the authors and do not necessarily reflect the official policy or position of DailyO.in or the India Today Group. The writers are solely responsible for any claims arising out of the contents of this article.