Time we relook at patriarchy because it's directly linked to sexual crimes against women.

You need look no further than mythology to know what the fabric of society, its structure and norms would be like. It's interesting to look at what Indian mythology holds as signs of strength and morality in women. These are women who always listen to what they're told, never protest and they're only recourse to expressing anger is renunciation of everything, even asceticism.

In fact, the only character I know of who was known for her intellect, poetry and story-telling, Avaiyyar, asked Ganesha to make her an old woman when she was quite young so that she could avoid men. And here are some more who did not really use their intellect, but are hailed as the most powerful women in mythology.

She is blessed with the ability to bear only male children who are guaranteed to become conquerors. What's more, she can restore her virginity after each delivery! Her story begins when Galava offers to pay his guru, Vishwamitra, a gurudakshina, and the latter asks for 800 white horses with black ears. When Galava approaches Yayati (a king) for the 800 horses, he hands over his daughter Madhavi instead. Since he doesn't have the horses himself, he asks Galava to marry off Madhavi to a king who can offer him 800 white horses. But no king has 800 white horses with black ears so Galava exchanges Madhavi for 200 horses with three different kings and then hands her over to Vishwamitra along with 600 horses. She is to be kept in lieu of the other 200 horses.

Everything with this story sounds unfair. Madhavi, like many other characters, was treated as property to be traded and her sole purpose was to bear children and that too only male. She is surprisingly hailed as a strong character because she renounces everything in the end and becomes a sanyasini. How is that strength? It would have been strength if she had refused to listen to her father in the first place. Madhavi does not show that she has a mind of her own and keeps bearing atrocity after atrocity. The concept of consent doesn't feature here and her womb is literally peddled. Sita is hailed as another pure and righteous woman. She follows her husband, Rama, when he is exiled to the forest, but is abducted by Ravana when she is tricked into crossing the Lakshman rekha. This leads to the battle of Ramayan in which Rama defeats Ravana. When a pregnant Sita returns to Ayodhya with her husband after 14 years, the people of Ayodhya question the lineage of the unborn children. Sita takes a test to prove her purity, but later chooses to quit everything and return to her mother, the earth, rather than being the queen of Ayodhya.

What's outrageous here is not just her abduction but the fact that she chose to go through with proving her chastity although it wasn't her fault. Above all, the whole concept of a lakshman rekha drawn by someone younger to her shows where she stands in the hierarchy of things despite being a Goddess. And should she cross it, there shall be questions on her very character. 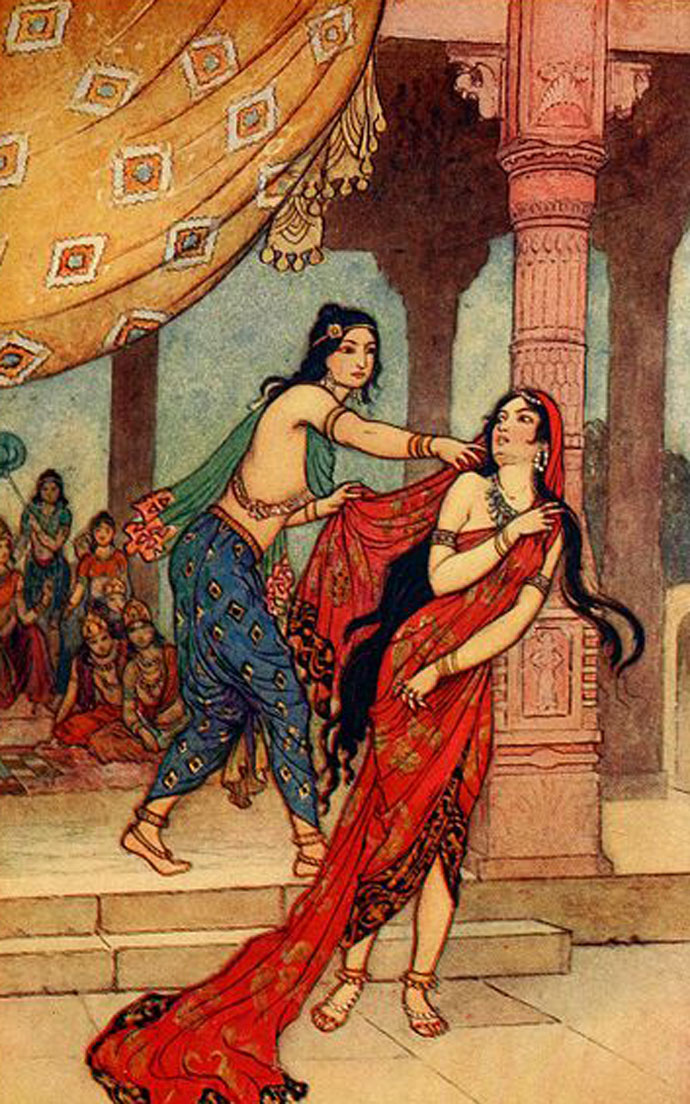 There is nothing strong about this character who was shared by five men (as if she is an object) none of whom could protect her from the Kauravas. (Credit: Wikimedia Commons)

Draupadi, as is well-known, is played and lost in a game of dice much like an object. She is publically disrobed by the Kauravas who were angered when she laughed at them and called Duryodhana "the blind son of a blind man". She's probably the only character in mythology to have shown her anger and successfully wrecked vengeance, but in the end, Draupadi loses everything and ends up sad and lost. She is also the first to fall and go to hell when the Pandavas climb the Himalayas. Again there is nothing strong about this character who was shared by five men (as if she is an object) none of whom could protect her from the Kauravas.

The wife of sage Gautam, Ahalya was one of the "most beautiful" women. So much so that Indra had his eyes on her. He takes the form of Gautam and seduces her. On knowing what transpired, the sage curses Ahalya to live for the rest of her life as a stone until Vishnu himself graces her by placing his feet on her. Ahalya's penance is considered exemplary. But come to think of it, she hardly had a voice. She was raped and punished for the rape. Indra was punished too for his crime. He is cursed with a thousand vulvae on his body and loses his testicles. But after performing penance, these are converted to a thousand eyes. While Indra renews himself, Ahalya simply rejoins her husband after penance.

Each of these stories show how patriarchy reduces the character of a woman to the number of sexual partners she has, and her purpose to child-bearing. The obsession with knowing the lineage of offspring, virginity and the narrow definition of character led to the imposition of restrictions on women and artificially stunted their status. And much of this continues today.

Even now, the way to seek revenge for many is to rape someone's sister or wife because somehow they are "property" and their sexual chastity is synonymous with the honour of the family. Either that or women are punished for crossing imaginary lines imposed by the society — it could be something as small as being out with a friend as in the case of Nirbhaya.

It's high time we relook at patriarchy because it's directly linked to sexual crimes against women.

Also read: Rape in the Bible

#Rape, #Patriarchy, #Women, #Mythology
The views and opinions expressed in this article are those of the authors and do not necessarily reflect the official policy or position of DailyO.in or the India Today Group. The writers are solely responsible for any claims arising out of the contents of this article.