How the Indian President, Ram Nath Kovind's visit to ‘My Son’ in Vietnam is a symbol of soft power

India‘s President Ram Nath Kovind is midway through a significant trip to two important Indo-Pacific countries, namely Vietnam and Australia. His visit to Vietnam has been his first to an ASEAN country since assuming office. It has also come soon after the election of Vietnamese President Trong, which happened in October 2018.

What is very significant is the fact that President Kovind began his visit from Da Nang, a place believed to have a rich historical and civilisational connection with India. Da Nang is famous for its world heritage site My Son, which is the origin and home of the Hindu Cham civilisation — which dates back 2000 years — and the ancient temples of their people, constructed by the kings of Champa between the 4th and 13th centuries AD, which also have Buddhist connections. This further strengthens its ties to India, considering that Buddhism originated in the Indian subcontinent, as President Kovind also pointed out.

The Cham community is one of 50 ethnic groups living in and around the margins of Vietnam, and they share distinct characteristics with Indians. In fact, a documentary on India and Southeast Asia produced by India’s Ministry of External Affairs has stated that the Cham community also have part Tamil ancestry.

#PresidentKovind visited My Son — UNESCO World Heritage Site, near Da Nang. One of Vietnam's treasured national heritage sites, this Hindu temple complex is a link to age-old ties with India. The Archaeological Survey of India is helping in its restoration. ???????????????? pic.twitter.com/oWy5LWRkmO

#PresidentKovind visited the Museum of Cham Sculpture in Da Nang, Vietnam earlier today. Glimpses of remnants of the Hindu-Buddhist Cham civilisation that goes back 2,000 years ???????????????? pic.twitter.com/No3XUdqZgc

The importance of the visit to My Son cannot be missed as it is one of the foremost Hindu heritage sites of Southeast Asia. As per UNSECO, “The My Son Sanctuary is an exceptional example of cultural interchange, with an indigenous society adapting to external cultural influences, notably the Hindu art and architecture of the Indian sub-continent. The Champa Kingdom was an important phenomenon in the political and cultural history of South East Asia, vividly illustrated by the ruins of My Son.”

In fact, some more research-driven audio-visual documentaries about My Son also state that there were more than 70 temples at the site, with inscriptions in Sanskrit and Cham. There are also details which state that a large number of the inscriptions allude to and describe interesting historical events, such as the then on-going wars between Champa and Cambodia in the 12th century.

Most of My Son’s architecture was destroyed by the US during the Vietnam War. Interestingly, My Son is the only place in Vietnamese history without the influence of the US or France. Indeed, a great start to President Kovind’s visit, and one which marks the kindred spirit and emotional link shared between the two countries, as well as a deep cultural connect. 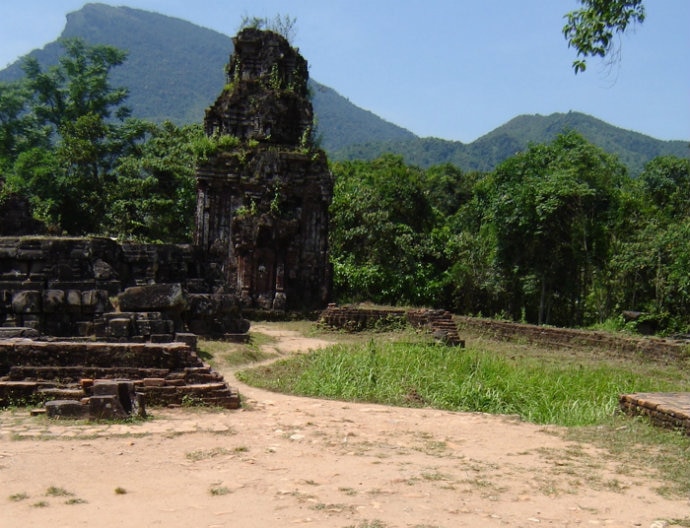 Most of My Son’s architecture was destroyed by the US during the Vietnam War. (Source: WikiMedia Commons)

Slowly but surely, India has begun effective projection of her soft power symbols in Southeast Asia. Currently, the Archaeological Survey of India (ASI) is helping Vietnam in the preservation and conservation of some of the temples there. To this effect, funds are released through the Ministry of External Affairs as part of India’s diplomatic outreach to such nations, with the ASI, under the Ministry of Culture, is the implementing agency. This type of work can go on for decades and is often monitored by third-party agencies such as the UNESCO World Heritage Committee.

In 2010, as part of an India-Vietnam cultural exchange programme, a two-member ASI team visited Vietnam to make a preliminary assessment of the task to conserve the Cham monuments, including the UNESCO World Heritage My Son group of temples. A memorandum of understanding was signed in October 2014 and execution of the project began with three groups of temples. It’s definitely high time that we have detailed research of Hindu temples in Vietnam, and of their idols and structures. After all, Southeast Asia holds an integral part of the destiny of Hinduism.

As per a research paper by the Center on Globalisation, Governance and Competitiveness of the Duke University, “Tourism has become an essential and fast-growing economic activity and it accounts for about 45 per cent of service exports in developing countries.” The paper goes on to attribute that “Vietnam has already had success in offering MICE (Meetings Incentives Conventions and Exhibitions) products in addition to its more well-known cultural tourism offerings.” The President’s visit could reignite, or rather is a gentle reminder for tour operators that enabling tourism in a substantive manner through a focussed approach by tapping into sites such as My Son, is the way forward. The My Son Sanctuary is an exceptional example of cultural interchange. (Source: WikiMedia Commons)

One of Vietnam’s former Deputy Prime Ministers, Vu Khoan, once famously asserted that, “The depth of diplomacy is culture.” What is also discernible is the vast reach of Buddhism, the flourishing and dominant religion in Southeast Asia — a common socio-cultural and religious thread. In fact, the Indian Council for Cultural Relations has established several chairs related to India in countries abroad, and there are several of them in universities in ASEAN countries.

Back to Vietnam, the visit of the President of India has had other highlights too. In a heart-warming gesture, students from the Vietnam National University, along with Indian embassy staff and their spouses, came together to sing the Hindi movie song, “Yeh dosti hum nahin todenge” (we will not break this friendship) from the popular movie Sholay, for the Indian president and his wife, Savita Kovind.

Music is not the only way to the President’s heart, who didn’t miss an opportunity to later tweet about Vietnamese cuisine and coffee, commenting on the fact that both are growing in popularity in India. He highlighted that Indians are popularly known to be tea drinkers; quite a testimony for the quality of coffee produced by Vietnam!

Back home, Vietnamese food is becoming more and more popular – and a society of tea drinkers has acquired a taste for Vietnamese coffee. I am keen that tourism between Vietnam and India expands #PresidentKovind pic.twitter.com/7CSROwSl1d

While drawing attention to the parallels between both countries, President Kovind noted that India and Vietnam both have a special year coming up, as 2019 marks the 150th birth anniversary of Mahatma Gandhi as well as the 50th anniversary since the passing away of Ho Chi Minh. Both are considered fathers and catalysts of change in their respective nations.

Ho Chi Minh and Vietnam are popular in India, especially in West Bengal where the famous chant ‘Amar Naam, Tumar Naam, Vietnam, Vietnam’ was earlier heard. The words have deep imprints and are recalled even to date.

In the book, Cultural and Civilisational Links between India and Southeast Asia, edited by Shyam Saran, the long-standing historical ties between India and the ASEAN region were determined by the nautical narratives of India. In one of the chapters titled, Indian–Southeast Asian Contacts and Cultural Exchanges: Evidence from Vietnam, the author, Le Thi Lien writes that, “trade along the sea and river systems played a vital role in cementing ties between India and Vietnam, mainly along the river systems, including goods such as metal ingots, gemstones, shell, carnelian, fine pottery, etc.” For millennia, Indians have believed in the power of civilisation and that has been a key aspect of Indian identity. This very premise has given Indians a sense of belonging, inclusion, and loyalty. The country’s bilateral relations and foreign policies have also been determined by alluding to the relevance of civilisational ties. The focus has been on that which connects, which is always a healthy focus to have.

India’s meaningful steps in harnessing these civilisational connects are what truly distinguishes Indian soft power. This by no means is an imposition with strategically important countries like Vietnam and other ASEAN countries. The visit of President Kovind to culturally significant places like My Son was welcomed by the people of both countries, and it also reaffirms that India is no longer reticent to exhibit to the world that she is serious about harnessing these soft power tools.

Also read: How a monument dedicated to a South Korean queen in Ayodhya is a symbol of India’s soft power