Everything, they say, is fair in love and war. And any veteran of politics will tell you that Indian politics is both.

Naturally then, in the lead-up to the Lok Sabha elections of 2019, both the BJP and the Congress will want to bring in their A-game.

Today, as we see Priyanka Gandhi Vadra’s name and face being flashed on our television screens, you know the Congress has won this round — at least, by the sheer speed at which they struck the hammer.

For Priyanka truly is their trump card. Her popularity rivals that of Sonia and Rahul combined. And if you had any doubts, just YouTube any footage from the Congress’s rally at Raebareli.

“We want Priyanka,” was the mass verdict.

And they shall have their way.

If the Congress is patting themselves on the back for playing this card — with slogans like “Dahan karo Modi ki Lanka, Behan Priyanka” — should the BJP be far behind in criticising the move? By dropping Priyanka into the arena, the Congress has accepted Rahul’s incompetence, or so says the BJP. 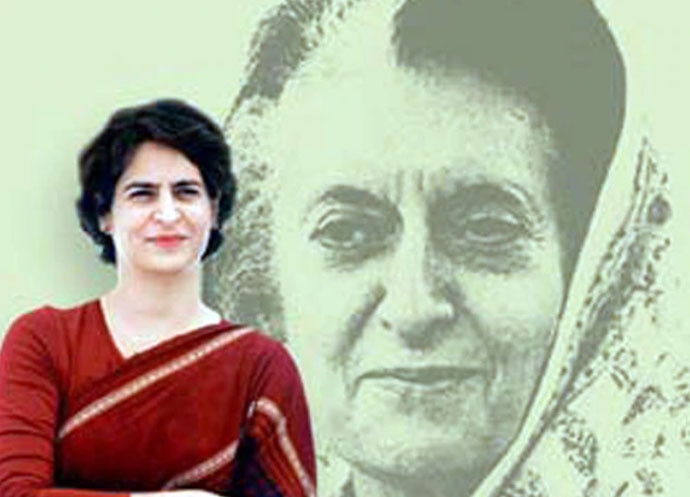 A reflection of the past? (Source: IndiaToday.in)

Well, we can debate that, and so much more. But can we just take a moment to reflect on Priyanka’s ‘packaging’ and the ghost of Indira Gandhi lurking behind her shoulder, please?

Many congratulations to Smt Priyanka Gandhi on being appointed as Congress General Secretary for Uttar Pradesh East.We are confident of a great victory under your able-leadership.India awaits a new era! pic.twitter.com/vTCqrrXPeD

There’s something about women in politics in India and sarees. Now Priyanka has always looked and dressed the way she has, but what strikes us in this Priyanka 2.0 avatar is her uncanny similarity to grandmother Indira. The ribbon-border purple khadi saree was a win. Full points for taking a thread from nostalgia and spinning a whole nine yards off it.

The ‘hair’ of tomorrow

Is Priyanka the Congress heir? We’d sure want that. But for now, let’s just say that the only thing missing from her carefully cropped and styled hairdo is Indira’s signature white streak. She’ll get there for sure.

Greying of hair is inevitable in Indian politics.

The ‘nose’ for power

Those who religiously follow political cartoons know that Indira’s sharp parrot-like nose was one of her most caricatured features. Clearly so, because it was also the most stand-out one. Rajiv Gandhi inherited that. And then there is Priyanka.

As long as she is keeping it out of other people’s business and not sticking it high up in the air like granny dearest, we are only nodding at the resemblance.

‘Making-up’ for the past

Even before Rahul Gandhi learned to say ‘women empowerment’ and took it to the moon and back on a popular television interview, Priyanka was associated with the actual groundwork the party would eventually go on to boast of.

No, she wasn’t just a pretty face. She was the face that meant business — elegantly, of course.

‘Iron’ in the fire

Remember when Priyanka lashed out at a reporter during the Congress’s candlelight vigil against the Kathua rape? Much like Indira, Priyanka is not one to take nonsense. What was Indira called for her iron will? The 'Iron Lady' of India, of course. And isn't Priyanka just that — the iron in the fire?

Clearly, apart from all the political games, what the Congress is playing this Lok Sabha election, 2019, is the mind of their voters. By giving them a carefully 'packaged' persona of Priyanka, modelled immaculately after their most successful leader, Indira Gandhi, they're hoping that if not the charisma, at least the nostalgia will work.

Also read: Acche din for Congress: Why Priyanka Gandhi is a ‘Brahmastra’ in UP and beyond