Kathmandu has used the Beijing card against us for decades irrespective of which political party has been in power.

Under Prime Minister Khadga Prasad Oli the undercurrents of India-Nepal ties will remain troubled despite his just-concluded visit to India.

In the wake of his electoral success, Oli has been rather upfront publicly about his vexed feelings towards India even when greater discretion would have served him and future ties with India better.

His interview to a Hong Kong-based newspaper after assuming office contained themes that portended continuing tensions with India, be it his determination to revive the $2.5 billion (Rs 16,200 crore) Budhi Gandaki project (allotted to China) that the preceding Nepali Congress government had cancelled, increasing infrastructure connectivity with China in order to lessen Nepal’s reliance on India and updating relations with India “in keeping with the times”, including a possible “correction” of the longstanding practice of Gurkha recruitment to serve in the Indian army, and so on.

He has waxed eloquent about China extending its railway network in Tibet to Nepal and connecting it to Nepal’s east-west rail project, which he felt could “revolutionise China-India trade, with Nepal in the middle”, unmindful that such talks back China’s strategy of entrenching itself more deeply south of the Himalayas and ignores India’s security concerns.

Oli’s interviews to the Indian press before his arrival were needlessly combative and contentious. He insisted that Nepal wanted only friendship from India, implying that India has not been friendly towards Nepal. He has harped on India’s interference in Nepal’s internal affairs. He has asked for the revision the 1950 treaty that “hurts and pinches the Nepalese people” because of its unequal nature, making light of the enormous advantages that Nepal derives from it.

His assurance to his people before departing for India that he will not sign anything against the interest of the nation, and reiterating it in his interview to the Indian press, suggested gratuitously that India seeks to pressure Nepalese leaders to sign agreements against their national interest.

He has unfairly thrown the blame for the non-implementation of the Pancheshwar and Mahakali projects exclusively on India. His vision of Nepal connecting to the seas through India and China lacks realism. Because of the constraints of its own geography China wants access to the Indian Ocean through Pakistan and Myanmar, but here is Oli dreaming of access to the Pacific Ocean through China!

Oli dismisses the danger of China’s infrastructure building in other countries carrying the risk of debt entrapment as an Indian perception born of India-China rivalry, ignoring that US, Japan, France and the EU have expressed such concerns too. He asserted that he would not make any agreement against Nepal’s national interest.

Such over-confidence in the capacity of the Nepalese political class, financial experts and bureaucracy in dealing with China’s methods and allurements seems misplaced, especially when the US and Europe are unable to handle China’s “predatory economics”. His position on holding the SAARC summit disregards that of India. Oli talks of the ballooning deficit with India, conveniently overlooking the fact that Nepal’s trade deficit with China is 44:1, whereas with India it is 10:1. 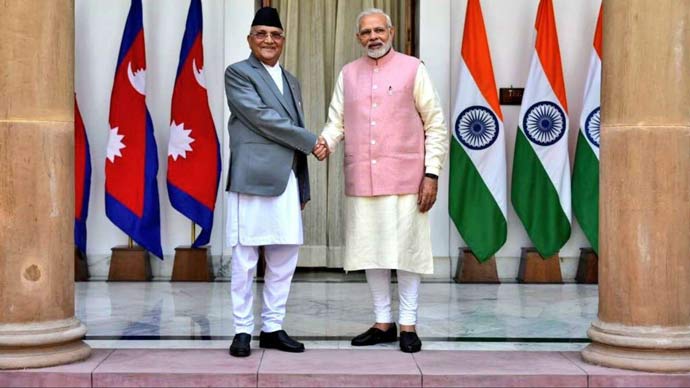 India is willing to engage with Oli, however grating his views may be. Modi has reportedly spoken to Oli three times since he won the elections. Sushma Swaraj has visited Nepal in February with a message of cooperation. Oli’s decision to visit India on his first trip abroad after assuming office is a positive gesture, but not too much should be read into it.

He could well view this gesture as according him space to expand ties with China. It would seem from the rather bareboned joint statement issued on the occasion of Oli’s visit that while in private talks between him and Modi the air may have been cleared and some mutual confidence built, no breakthrough in relations has occurred.

A new partnership in agriculture, a project to connect Raxaul to Kathmandu by rail, and a new connectivity with Nepal through inland waterways have been announced. These are long gestation projects which when implemented would tie the two countries and economies closer, but in the immediate, they will have limited impact on the overall quality of bilateral relations or the pro-China proclivities of the Oli government.

If Oli establishes the rail links with China, our Raxaul-Kathmandu rail project will only help him achieve his vision of connecting China and India with Nepal in the middle. If the Budhi-Gandaki project is revived and India refuses to buy power from any project in Nepal not built by Indian companies, we will come under attack for impeding Nepal’s development.

Some of Oli’s statements at the civic reception in his honour at Delhi show that his political offensive against India continues. He spoke of obstructing the free movement of goods, services and people as having no place in today’s interconnected world, overlooking Pakistan’s denial of such movement from India to Afghanistan as a SAARC country, as well as China’s obstruction of Outer Mongolia’s truck traffic as punishment for its decision to inviting the Dalai Lama

In sum, our relationship with Nepal will remain difficult. We have to manage it as best as we can because of Nepal’s acute sensitivity over issues of sovereignty and deep-seated suspicion about our interference in its internal affairs. Nepal has played the China card against us for decades irrespective of which political party has been in power in Kathmandu. This will continue.

#Narendra Modi, #KP Oli, #Diplomacy, #China
The views and opinions expressed in this article are those of the authors and do not necessarily reflect the official policy or position of DailyO.in or the India Today Group. The writers are solely responsible for any claims arising out of the contents of this article.