To Russia with love: Undeterred by looming threat of US sanctions, why India is going ahead with joint ventures with Russian arms firms

Last week, India and Russia signed a lease for an Akula class nuclear-powered attack submarine which is to be refurbished in a Russian shipyard and transferred to India after a six-year refit. This lease, worth over $3 billion for the Chakra-3 submarine, will replace the one operated by the Indian Navy. It comes amid a blizzard of defence deals worth over $10 billion between Moscow and New Delhi in just six months. The Chakra lease is second to last October’s inking of a $5.4 billion contract to purchase five S-400 missile systems.

Sources say a majority of the government-to-government deals are being directly steered by the PMO underlining their strategic nature. Over 40 per cent of the lease amount of the Chakra-3 is to be paid in advance. This, sources say, is a departure from the 2011 lease of the Chakra 2. On March 3, Prime Minister Modi announced an Indo-Russian joint venture to make AK-203 rifles at an Ordnance Board Factory in Korwa, Amethi. 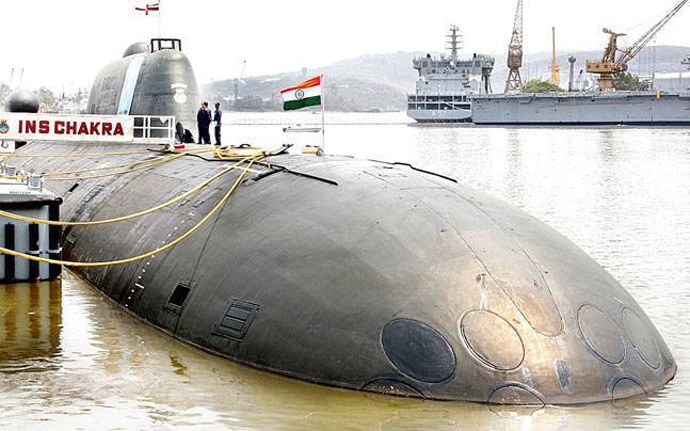 The INS Chakra, anchored at a nearby port. (Photo: Wikimedia Commons)

The JV, will churn out an over 7.5 lakh modern iterations of the iconic assault rifle and ensure Russia’s primacy in the Indian small arms market for several decades. Last October, India and Russia inked a USD 1.5 billion deal to buy two Krivak class frigates. In January, India approached Russia to purchase 18 additional Sukhoi Su30MKI aircraft worth approximately Rs 5,000 crores. The kits will extend the ongoing Su-30 MKI production line at HAL’s Nashik facility for one more year. Last month, the MoD opened talks with Russia for a USD 800 million purchase of 21 mothballed MiG29 airframes. These airframes will be refurbished and supplied to arrest the IAF’s falling squadron numbers.

Delhi pushed these deals despite the looming threat of US CAATSA sanctions imposed on Russian arms firms and countries who buy from them. Senior Russian officials affirmed that payments would be made in rupees and roubles, and separate financial channels for these purchases have been worked out.

Indo-US defence ties had skyrocketed after the 2006 Indo-US nuclear deal when US firms bagged lucrative defence contracts worth nearly USD 6 billion for ten C-17 and a dozen C130 transport aircraft, eight P-8I Poseidon maritime patrol aircraft in government to government deals, making the US the second largest hardware supplier after Russia. This continued under the Modi government with USD 3 billion deals for 15 Chinook utility helicopters and 22 Apache helicopter gunships and Rs 5,000 crores for 145 M-777 howitzers.

India recently awarded SiG Sauer Rs 700-crore contract to supply 72,000 assault rifles. The US and India are in talks for US MH-60R Naval Utility Helicopters and Sea Guardian armed drones, all worth USD 4 billion. But given the funds squeeze in the defence ministry, these are unlikely to proceed within the financial year.

Also read: The Official Secrets Act in the times of Rafale, Bofors