Citizens whose bodily autonomy is under threat should ask the government how it can get its priorities so wrong.

By now our television screens have been flooded with images and video clips of the International Yoga Day observed in several parts of the world. With the United Nations adopting June 21 to mark Yoga Day worldwide, and almost 200 countries adopting it, there's a festive cheer everywhere.

Prime Minister Narendra Modi performed the asanas in Lucknow, while BJP national president Amit Shah rocked the dais with Baba Ramdev. Yoga Day was celebrated in New York, London, at the heritage site of Machu Picchu, in the beaches of Croatia, in Mexico, aboard the aircraft carrier INS Vikramaditya, other navy ships, and many, many other places.

We have Bollywood stars posting their yogic adventure on Instagram, news anchors reporting with yogic repose, several yoga programmes on TV, celebrities lining up to post their rendezvous with yoga on social media, asking us to see it beyond religion, caste, gender, even nationality.

Everyone wants to project yoga as the great unifier and the International Yoga Day as India's brilliant attempt to entrench its "soft power", the cultural export world eagerly takes up, at a time when global uncertainties and paradigm shifts in international relations are underway. 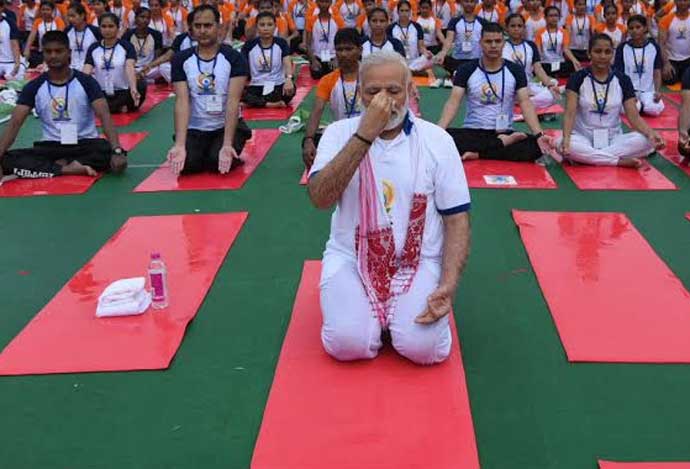 One would be tempted to believe that everything was fit as a fiddle with the India story, and Yoga Day was about coming together to express a shared interest in achieving "health and wellness", as if the whole country were turned to a spa, or a school drill, for a day.

The mass demonstrations of the governmental variety, showcasing Indians and others doing yoga, however, have a chilling effect when seen through the lens of the state of civil rights in the country and the erosion of constitutionalism as the guiding spirit of nation-building.

If the purpose of celebrating Yoga Day is health and wellness, as PM Modi said today, then we need to ask what kind of health and wellness will be achieved if the citizens' bodily autonomy itself is under threat. If the idea behind turning yoga from a personal choice and activity of interest, to something that is becoming a collective obsession, a top-down mass drill and a bid to demonstrate one's patriotism, something approaching the voluntary-but-mandatory conundrum, was promoting national health, then we must ask why the health indicators are falling so sharply over the last three years?

Exactly as the AYUSH ministry brings out a booklet advising pregnant women to eschew the crucial protein from meat, not have "lustful thoughts" or sex, items straight from the book of ultimate quackery not without its share of stinking patriarchy out to control the womb, we do yoga on the streets of New Delhi and Nagpur.

As RSS-affiliated organisations chalk out racist plans to make "tall and fair" superbabies in the womb, resembling Nazi-era eugenics that mixed discredited pseudoscience with racist gobbledegook, we are made to stretch our limbs in ministries, corporate offices, government departments, schools and colleges, film studios, touristy places, on gentrified banks of rivers that are drying up along huge stretches.

As debt-ridden farmers in Mandsaur took to the streets to protest, and as the police fired at them killing eight, the Union minister of agriculture, Radhamohan Singh, preferred his three-day yoga camp with Baba Ramdev, over attending to the emergency, or addressing the grievances of the agitating farmers.

As the central government keeps flip-flopping on farm loan waivers, the corporate-owned media is flooded with think pieces on how it's fiscally inappropriate, we don't hear a single word of assurance from the prime minister himself.

While farmers figure hugely in the BJP's electioneering slogans and manifestoes, they are forgotten once the goal is achieved. The prime minister who has flown to Lucknow to participate in the Yoga Day celebrations, however, didn't have the minimum courtesy to meet farmers from Tamil Nadu who organised a month-long protest at Jantar Mantar in the sweltering heat of Delhi.

From rolling naked on the streets of Delhi close to the Parliament building, and 7 Lok Kalyan Marg, to wearing garlands made of skulls, they tried everything. But they were unsuccessful in eliciting a single reaction from the prime minister, who couldn't be persuaded to show any heart towards those in utter penury and distress, who have seen their brethren take their own lives when they couldn't bear it any longer.

Can a farmer do yoga on an empty stomach, as his crops don't even fetch him the cost price of production? Can India, with 40 million families in agricultural sector facing an unprecedented crisis, look the other way, stretch its flailing limbs on a mat while its poor go hungry?

Even the poor children, who are sent to government-run schools because they'd get the real meal of the day there, are to be denied the mid-day meal in case they don't have an Aadhaar card. Tuberculosis patients, mostly coming from poverty-stricken swathes of the country with poor sanitation and gross malnutrition, too, will be denied treatment if they don't have an Aadhaar card.

We need to ask what we understand by health and wellness when our fingerprints and iris scans become more important than our entire bodies? When our bellies are sacrificed at the altar of identification? When our private data is leaked from government websites and the attorney general of India argues in court that there's no integral right to bodily autonomy?

Erosion of constitutional values can be seen in the increasingly normalised and routinised instances of mob lynchings, sparked by rumours of beef, cattle slaughter, being a Muslim and other perfectly legal modes of being a regular Indian, at least erstwhile.

Last week, civil rights activist and former member of the disbanded National Advisory Council of the UPA era, Nikhil Dey, along with a few others, was convicted in a bizarre case of trespassing and violence by a court in Rajasthan.

This is the state where lynchings have reached an art form, where Zafar Khan, an activist, was murdered because he objected to men photographing women doing their toilet. "Kill him" were the words uttered by government officials in the Vasudhara Raje-ruled state, according to eyewitness reports. When bodies of men, women are children in our neighbourhoods are so dispensable, how does yoga keep them alive?

While the world embraces yoga, truly democratises it by freeing it from plush New York City studios selling Bikram yoga practised by the richie rich of America, India itself is forgetting the true lessons of yoga by delinking it from its egalitarian basics, which too happen to be liberty, equality, fraternity.

Yoga, a millennia-old practice originating in India, is about unification of the mind, body with the surroundings. It's about appreciating the world around, living in harmony with fellow creatures, not just human beings, and above all, respecting the sanctity of life.

The physical aspect of yoga is really a small fraction of all that this ancient tradition is about. Hermetic and esoteric, its origins and history are connected to going beyond and questioning given wisdom, doubting dogmas as much as believing in individual freedom.

The mass drills of Yoga Day featured those who neither believe in spiritual freedom, nor in constitutionally-guaranteed liberties. Among them are those like the Union minister of culture, Mahesh Sharma, who wrapped one of the killers of Mohammad Akhlaq in a tricolour and called him a martyr.

Those screaming the loudest on Yoga Day are the ones who demand that our national cricket team should wear black to express solidarity with the martyrs, but don't even whimper when the veterans' pensions are toyed with, when the Army becomes a pawn in a dirty game of majoritarian politics, when its secular credentials are shred day after day.

The mass drills of Yoga Day feature soldiers posted in Siachen, but we are discouraged from asking what happened to BSF jawan Tej Bahadur Yadav, who was upset with substandard meals served in the camps. Yoga celebrations in Ahmedabad look good, but we better keep our mouths shut why the cases of the deadly Zika virus infection were kept under wraps to allow the Vibrant Gujarat Summit 2017 to go ahead as planned. Surely, the government has a skewed vision of health when it allows homeopathy to receive crucial funds as part of the AYUSH ministry, while eggs are discontinued in mid-day meals in states with severe protein deficiency among women and children.

Yoga Day wouldn't be half bad when the bodies of those belonging to minority religions or Dalits are not threatened by virtue of just being so. Yoga Day would mean something when the prime minister has the heart to meet farmers on hunger strike barely a kilometre away from his office or residence, who have lost members of their families to the fallout of faulty monetary policies and deep governmental neglect that's the agrarian crisis.

It's not a nation that performs a mass drill together, as the experience of Nazi Germany, with its fascist emphasis on physical demonstrations of loyalty to the dear leader, had shown. It's a nation when it celebrates its bountiful diversity, but the heart of which still beats in one beautiful rhythm. It's not a nation which excludes those who are most vulnerable from its glory, which wants its drum beats of nationalism to instill fear among those who question, which wants its people to surrender their rights, feed on fake news, take propaganda for truth, and look at imagined pasts and futures at the expense of the present. It's not a nation if it repeats its foundational violence and forgets its foundational vows of taking everyone along.

Are we really to compliment the government and Prime Minister Narendra Modi on pulling off this mass con on Indians? Each day is a new Marie Antoinette moment, but Yoga Day is a Marie Antoinette Day by itself.

#Yoga, #International Yoga Day
The views and opinions expressed in this article are those of the authors and do not necessarily reflect the official policy or position of DailyO.in or the India Today Group. The writers are solely responsible for any claims arising out of the contents of this article.