'Coming Soon': The 'jihadi' threat to West Bengal is very real. We need to take it very seriously

The bloodiest terror attack in Bangladesh on July 1, 2016, was an eye-opener when the five dead terrorists were profiled. Today, their ghosts have resurfaced, and issued a warning to West Bengal.

It was hot as hell on the first day of July and the post-evening dinner rush at the Holey Artisan Bakery in Dhaka, Bangladesh, was palpable. Described by the media as "one of the most loved restaurants in Dhaka", this famed eatery was, as usual, teeming with foreign customers during dinner time.

Anybody who's been to that restaurant will tell you that it's an experience in itself, having dinner at the restaurant on Road No 79, House 5, Gulshan 2 in Dhaka. Once there, you would literally see people from around the world dining near you. Very popular among Europeans, the restaurant surprisingly held a special place among the Japanese as well.

At exactly 9:40 PM on July 1, 2016, five youths — all local Bangladeshis in their early 20s — walk into the restaurant. They were all heavily armed with automatic assault rifles, bombs and pistols. One of them — who appeared to be the leader — was waving a sword menacingly. Before the diners could even notice them properly, they triggered a few blasts, resulting in panic among the diners, most of whom ducked under their tables to save themselves.

As the panicked diners didn't know what to do next, the terrorists started taking hostages.

The women in hijab and a few Bangladeshi local customers were politely asked to leave — while the foreigners were huddled together.

It was perhaps one of the longest nights Bangladesh had ever experienced. The next morning, a special commando operation was initiated but it was a failure, in my opinion. Ultimately, 22 civilians were killed — among them, there were nine Italians, seven Japanese, seven Bangladeshis and one Indian student from Berkeley University — Tarishi Jain.

The bloodiest terror attack in Bangladesh on July 1, 2016, was an eye-opener when the five dead terrorists were finally profiled.

The investigators declared that they were all from well-to-do middle-class families and were educated in the best of educational institutions, including one who had studied from the Singapore campus of Monash University. Just like the recent Sri Lankan terrorists, these Bangladeshi terrorist-students had no issues in their lives — and yet engineered the worst nightmare Bangladesh has ever seen. 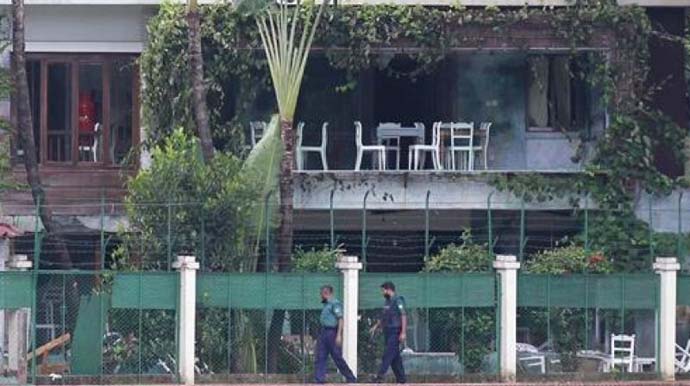 Holey Artisan, the upscale café in Dhaka, Bangladesh, after the terror attack of July 2, 2016, when gunmen murdered 22. (Photo: AP)

After the attack, an Islamic State fighter called Abu Issa al-Bengali released an audiotape where he said, "What you witnessed in Bangladesh ... was a glimpse. This will repeat, repeat and repeat until you lose and we win..."

Three years later, the ghosts of those five dead terrorists have resurfaced again to haunt us. This time, they are threatening not only Bangladesh — but India as well. There is no prize for guessing which part of India is geographically and ethnically linked to Bangladesh.

Yes, the state of West Bengal.

India Today reports that the Islamic State (IS) has recently released a trilingual poster (attached below) which has threatened both Bangladesh and India with a repeat of such an attack. "A pro-Islamic State (IS) Telegram channel has released a poster in the Bengali language which says, "Coming soon", indicating that the IS could be planning an attack in either Bangladesh or West Bengal," India Today writes in the same report.

If one takes a cursory glance at the poster, then the connection with the Dhaka terror attacks is unmissable because the poster carries the photos of the same dead ISIS militants who were gunned down during the rescue operations at the Holey Artisan Bakery.

More importantly, the poster now mentions an 'emir' of ISIS in Bangladesh who is called Abu Mohammad Al Bengali.

In all probabilities, the new ISIS emir, Abu Issa and Abu Mohammad, are the same person — but that is not the moot point.

The main point is that perhaps we in India haven't taken the threat with utmost seriousness.

Yes, the threat has been reported in all major news outlets of the country — but it seems that the importance of the news has been swept aside by the incessant bombardment of developments during the Lok Sabha elections and has perhaps already vanished from public memory. There have been no formal statements from any of the governments either.

Bangladesh admitted that it made the mistake of not taking the terror threat as seriously as it should have been after the 2016 Dhaka attacks. Admittedly too late: Army soldiers patrol near the Holey Artisan restaurant, Dhaka, after the attack in 2016. (Photo: Reuters)

Sri Lanka too admitted that it didn't react to the impending terror threat that was tipped-off by India.

Can India too now afford to walk the same path and be careless about this direct threat?

I had written earlier about how West Bengal has become a haven of illegal Bangladeshi infiltrators and how they are naturalising themselves as citizens of India by taking advantage of the geography and other loopholes in the law. I has also pointed out how the areas close to the Bangladesh border are particularly vulnerable due to unchecked infiltration by illegal immigrants from Bangladesh.

There have been numerous published reports and research articles about how Bangladesh has become a sanctuary for terrorists operating against India for many decades now.

The porous borders and the lack of effective policing have made the problem more complicated.

Another problem is the fast-changing demography where Bangladeshis are increasingly getting naturalised as Indian citizens. The Ministry of Foreign Affairs has recently come down very hard on two Bangladeshi film stars who were found campaigning here during the run-up to the Lok Sabha elections. Obviously, the popularity of the actors and the need to make them do election campaigns in West Bengal proves a point — Bangladeshis are here in West Bengal and here in large numbers.

In light of the above, the Centre must take emergency measures and ramp up counter-terror measures to ensure that no terror attack takes place in crowded areas of Kolkata — the heart and capital of West Bengal.

The problem is: Not one drive has been undertaken to find out who among the Bangladeshi migrants are legal and who is here on our soil illegally.

Of course, many of us don't know how many Jihadi elements are among the illegal immigrants who have lately made West Bengal their home — we must know that immediately.

The lack of data among the illegal immigrants who are pouring into West Bengal every day is the huge security risk that the people of West Bengal are living with every day. Even though Bangladesh has declared a high alert after the terror poster was released a few days ago, no such announcements have come forth on this side of the border.

India hasn't given a statement about how the government agencies are planning to combat the terror warning, given the fact that it has come as a direct threat to its citizens and not as a regular intelligence input.

I am afraid — very afraid — that the threat is getting lost in the hullaballoo of the Lok Sabha elections which has grasped every politically conscious Bengali in the state of West Bengal.

It takes only a few seconds for a bustling city to go into a mode of panic though. It takes just a few minutes for terrorists to walk into a hotel or a railway station and start firing indiscriminately from their automatic rifles. It takes a few minutes to turn a maximum city into a city in maximum panic.

Ask Mumbaikars like me and I will tell you how a perfect evening can turn into a nightmare because Mumbai was not ready for a few demons who walked into our city.

When the terrorists fire from their weapons, they don't discriminate between people on the basis of age, gender and sometimes, even religion. They have no pangs of guilt or shame for acting like a devil.

Let's respect all the sacrifice our countrymen have made earlier in such situations by learning from the tragedies of the past and securing our future.

Let's hope that even though we are not getting to hear about it enough through the media, our governments are fully prepared to thwart any such attack on humanity.

If there is any time to throw an immediate and impenetrable security ring around the citizens of West Bengal — the time is NOW!