#IndiaWithIsrael has been trending on social media since the present conflict broke out. Much of it can be attributed to the overt friendship between Narendra Modi and Benjamin Netanyahu.

As one would expect in these polarised times, reaction of the Indian chatterati to the Israel-Hamas conflict has been sharply divided. Those having a default position to oppose anything the present government does have, of course, vocally condemned Israel without distinguishing between the Hamas and the core Palestinian people. However, perhaps for the first time, one has heard equally voluble support for Israel’s retaliatory action. #IndiaWithIsrael” has been trending on social media since the present conflict broke out.

Much of it can be attributed to the overt friendship between Narendra Modi and Benjamin Netanyahu. This has been supplemented in good measure by the diplomatic overdrive of the Israeli Mission in India through several initiatives on the ground. 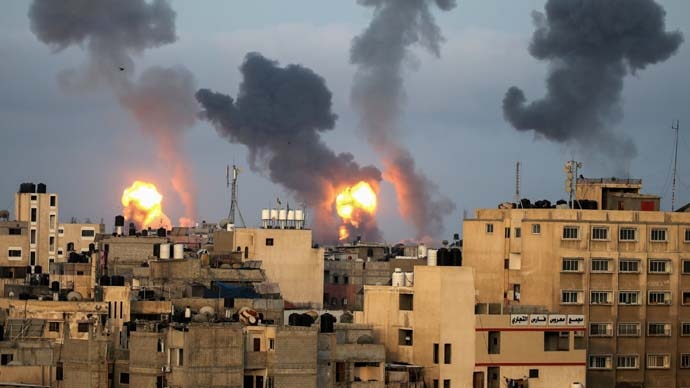 Flames and smoke rise during Israeli airstrikes amid a flare-up of Israel-Palestinian violence, in the southern Gaza Strip. (Photo: Reuters)

India's official position on the Gaza-strip outbreak before Eid has been both nuanced, layered and well-calibrated. Without diluting our position on the Palestinian cause, India has stopped short of indicting Israel for the use of disproportionate force. This is also indicative of the level of maturity that the India-Israel relationship has attained in recent years.  It is quite evident that Israel understands India’s constraints in adopting a more hawkish stand like the 25 countries that have openly sided with it.

When Narendra Modi came to power in 2014, there were apprehensions expressed about the future of India’s relationship with Islamic countries. Proving the sceptics wrong, the Modi Government increased its level of engagement with the Gulf countries. It also extended the initial olive branch to Pakistan by wooing Nawaz Sharif. But, subsequent developments turned the efforts to nought.

However, most notably, India took risks of annoying the Trump administration by taking an independent line with Iran, where India had huge stakes. However, all these relationships have been pursued with a non-negotiable rider of no compromise on terror.Though in their public posturing the Arab countries have been critical of the 'violence' in Jerusalem, it is well known that Israel is no longer the anathema it used to be for them. While UAE and Bahrain have established diplomatic relations with Israel backchannel exchanges with Saudi Arabia and Israel are no longer a secret.

India’s stand has been consistent with this strategy. It has not done or said anything that would offend its friends in the Arab world. At the same time, it has quietly and firmly affirmed that Hamas cannot expect to replace the PLO in the historical ties between Palestine and India.

It would be naïve to pretend that foreign policy is guided by anything other than self-interest. Though much as the liberal busybodies would like the new administration in Capitol Hill to upturn Trump’s position on Israel, Biden-Harris do understand its implication for the United States both in the Middle East and within the country. Therefore, their posturing has so far been marked, as was expected, by pragmatism. So, India should not feel apologetic about revisiting its historical position with the changing times.

For the role India envisages for itself in the global high-table it will have to reimagine its foreign policy on several fronts. To be taken seriously as an emerging power India has to shed its diffidence. We cannot remain trapped in old-world inhibitions with pretensions of “non-alignment”. One lesson China has taught the world is the meek can no longer hope to inherit the world. Further, we do not have the luxury to wait for another seventy years to claim our rightful place in the “big boys club” after having generously given it away to a northern neighbour who has come to haunt us.

In a post-Covid world, no matter whichever government is in power, India would need Israel as an ally, friend and partner, more than many countries in the world. India’s equation with Israel is also going to have a bearing on its relationship with other countries. Some may not be happy with it but one cannot please everyone at the same time. To play in the league of seniors India should be able to speak her mind and, most importantly, be clear about what is good for her own people. 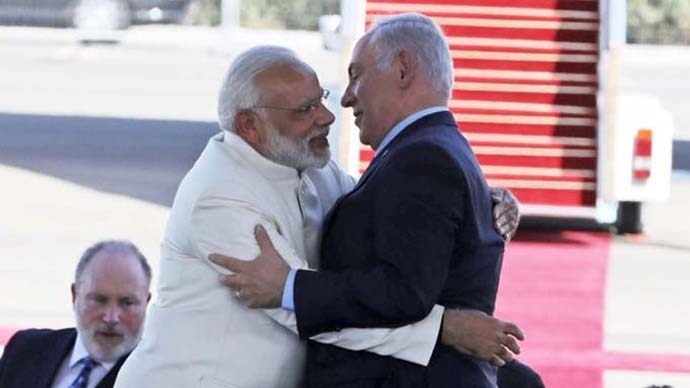 #IndiaWithIsrael has been trending on social media, perhaps because of the overt friendship between Narendra Modi and Benjamin Netanyahu. (File photo: Reuters)

The scope of collaboration between India and Israel are immense and not limited to the government to government and business to business alone. While Defence, Pharmaceutical and Technology are the obvious areas of synergy, there are many more opportunities at the ground level especially in the field of agriculture, climate and water. Some progress has already been made in these domains. The room for people to connect is enormous. Israeli knowhow can transform agriculture in many parts of the country as it has already been doing in Gujarat, Rajasthan and in states like Tamil Nadu and Karnataka in the South of India.

In the midst of the conflict, there are reports of the Biden administration clearing the supply of precision-guided weapons to Israel while appealing for a ceasefire in the same breath. This may have come as a bigger jolt to the anti-Israel lobby around the world than to Hamas. But, that is realpolitik.

As a responsible emerging actor on the global stage, India should earn the respect of the world for its conviction in the two-state policy. But, old binaries cannot apply forever. Forging new alliances does not mean throwing historical ties out like the proverbial baby and bathwater as it were.

As a significant and yet neutral partner, India may have a better locus standi, leverage and acceptability as an interlocutor in the peace process. This would also strengthen the alternate axis against global terror.

Therefore, in a changing context, India should not be coy about saying "Shalom" – which means both Hello and Peace !!

Also Read: Israel is everything the RSS wants India to be, Modi is making it happen

#Narendra Modi, #Israel-India ties, #Benjamin Netanyahu, #Israelpalestineconflict
The views and opinions expressed in this article are those of the authors and do not necessarily reflect the official policy or position of DailyO.in or the India Today Group. The writers are solely responsible for any claims arising out of the contents of this article.