“If you’re against Israel you’re not an enemy or an opponent — you’re a terrorist. Terrorism is supposed to deal with death indiscriminately, and must be destroyed wherever it appears... very smart of Israel to carry the war right into the heart of vocabulary, and annex the words holocaust and genocide… the invasion of Lebanon didn’t make Israel an intruder or predator... the destruction and massacres in Beirut weren’t the work of terrorists armed by America and dropping tonnes of bombs day and night for three months on a capital with two million inhabitants... words are terrible and Israel is a terrifying manipulator of signs...

— Jean Genet in Prisoner of Love.

Irish artist Jim Fitzpatrick is famous for his black-and-red poster of Che Guevara. The image, made 50 years earlier, though appropriated by the consumer and ad industry, remains an eternal symbol of resistance — the synthesis of romanticism and radicalism, since Che was shot dead by CIA mercenaries in the jungles of Bolivia in 1967. Now, Fitzpatrick is doing a Che redux for Palestine. This time it is Ahed Tamimi. Just about 17, this unarmed Palestinian girl with golden hair, and the kind of guts only found in the fighting women of Palestine with their slings and stones, became a contemporary legend when she was shown in a video in a physical scuffle with armed Israeli soldiers in December last. She ends up slapping the soldier outside her home in West Bank’s Nabi Saleh village. She is now under trial, imprisoned in an Israeli jail, charged with 12 counts of violence. She seems utterly stoic, resilient, and unrepentant.

The entire Hollywood knows that Gal Gadot, the Israeli model and actress who played the eponymous protagonist in the bestseller movie Wonder Woman, hates Palestinians. Now, Fitzpatrick has done a reverse camera obscure with the image of Wonder Woman: he calls it the “Real Wonder Woman”. It is available on his site, and can also be downloaded for free.

Surely, Che’s iconic poster will now face stiff competition all over the world’s unrelenting expanse of rebellion and dissent, with the jailed teenager becoming an international celebrity. A Palestinian child holds bread during a protest against aid cuts, outside the United Nations' offices in the southern Gaza Strip, in January 2018. Photo: Reuters/Ibraheem Abu Mustafa

The whole world knows that Palestine is an occupied territory. It is a fact — a priori. Before Israel annexed it, the entire map was there as evidence. Now, surrounded by infinite walls, armed fortresses and a formidable war machine backed by the Americans, barricades and barbed wires, with orthodox Israelis settling in illegally violating UN provisions, and hardliner Benjamin Netanyahu upping the ante on a daily basis, the ancient mapping seems to have become a mere metaphor. The Palestinians, cloistered, ghettoised, brutalised, humiliated and hounded, can just manage their impoverished lives a little bit of a strip, here and there, as in the eastern front of the Gaza Strip where they have been protesting in thousands for the last six weeks, observing “Nakba”.

“Nakba” literally means a “catastrophe” in Arabic. It is in memory of the ethnic cleansing by Israel in 1948, when 7,50,000 Palestinians were rendered homeless, internal refugees in their own ancient land, forced to migrate to neighbouring countries, as in the huge refugee camps in Lebanon. Since then, the massacres of unarmed Palestinians have continued like a tragedy — and always turned into a nightmare – while the world has watched with stunning silence, and the usual lame duck rhetoric, playing a tacit game of complicity with America and the western powers, even while US allies like Saudi Arabia allowed this one-dimensional genocide to continue ad infinitum. In this blood-soaked and blurred “occupied” map, the dots seem to have vanished from historical memory: the first Intifada, the 1970-71 Jordan conflict, Israel’s invasion of Lebanon, the War of the Camps, the Sabra and Shatila massacre, and the scores of bombing and missile attacks, with the maximum casualty among little infants and children: you see, they can’t run for their lives because they just don’t know what’s happening.

On Monday and Tuesday last, at least 58 people were killed, who were protesting against the Israeli occupation at the border near the barricades and barbed wires where the armoured Israeli war machine has been stationed eternally.

Often, they risk their lives and go to the point where they are almost face to face with the Israeli armed forces, who are ready to shoot. They plant a Palestinian flag or touch the wire as a sign of both “reclaiming their past, their land, or pushing their bodies against confinement”, as an independent journalist with Democracy Now reported from the Gaza Strip. 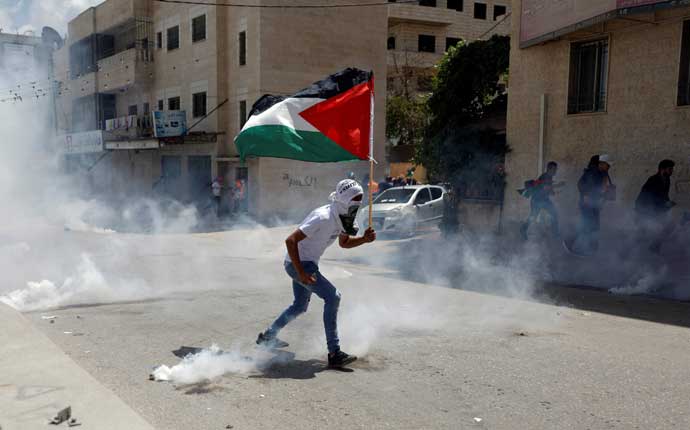 It is not wide off the mark to say that the arms industry is experimenting with a new range of arms on the vulnerable, non-violent bodies of the Palestinians. Photo: Reuters

Almost all of them are unarmed, except for the slings, the stones and tyres, which they burn to create a mythical shield of black smoke so that the Israelis have to deal with a clouded vision in this arid landscape — the so-called buffer zone. Of the dead, there is a little baby who inhaled tear gas, among nine other children killed. Apparently, nine journalists and one para-medic have been injured. Almost all journalists on the ground have categorically reported that unarmed people were killed by sniper fire; the Israelis choosing a certain part of their bodies to cripple, maim or kill, much like a video game. They are also reportedly using “high velocity” and “fragmented bullets” which burst apart into many shells, piercing different parts of the body.

It is not wide off the mark to say that the arms industry is experimenting with a new range of arms on the vulnerable, non-violent bodies of the Palestinians.

Orthopaedics are saying that Palestine will now witness “a new generation of cripples”. Reminds of the “occupied” and “imagined” homeland of the Kashmiris in India, where scores of youth have been left blinded or half-blinded by pellets.

There are reports from the Gaza Strip, which this columnist has accessed through local sources in the conflict zone, that suggest the hospitals there have been unable to cope with the thousands of injured who have been admitted, there is a stark shortage of medicine, medical equipment, doctors and staff, orthopaedics, food and water.

The Israelis are not allowing the injured to access relief. In the last two days, the count of the wounded has risen to 2,500 to 3,000. The death toll itself stands at more than 100, while the total number of injured has reportedly grown to more than 10,000.

Surely, if this is a “Nakba”, a catastrophe, it is being played out for the world to see, and Israel cares a damn for international opinion. Even as Donald Trump sent daughter Ivanka Trump to open the “symbolic” new US embassy at Jerusalem, the snipers went about their target practice at the eastern front on the Gaza Strip. Indeed, it is a daily holocaust, with the Israelis doing to the Palestinians what the Nazis did to the Jews in Germany and inside the gas chambers and concentration camps spread across Europe before World War II. Even then, the world, including US and Europe, turned a blind eye — until six million Jews were eliminated by Adolf Hitler.

In this context, in would be wise to remember the words of Mahatma Gandhi, who is as relevant as ever: “Palestine belongs to the Arabs in the same sense that England belongs to the English or France to the French. It is wrong and inhuman to impose the Jews on the Arabs... Surely, it would be a crime against humanity to reduce the proud Arabs, so that Palestine can be restored to the Jews partly or wholly as their national home.”