Profound tragedy of being Palestine

Thousands thronged to pay tribute to Razan al-Najjar, 20, as her mortal remains were buried. She was an intrepid medic who was shot dead by Israeli forces while she was trying to save lives. She ran towards the Gaza fence, undaunted, to help an injured protester when bullets from Israeli snipers pierced her flesh. Even as an identifiable healthcare professional and non-combatant, she was fatally shot.

According to Norman Finkelstein, a noted political scientist, she was assassinated again in New York Times. Reporter Herbert Buchsbaum distorted her earlier interviews, turning her devotion to aid the wounded and be a shield into “avowal of a terrorist cause”. What beguiles intellect and even plain empathy was further was her refusal to accept imprisonment being equated with waging a war. 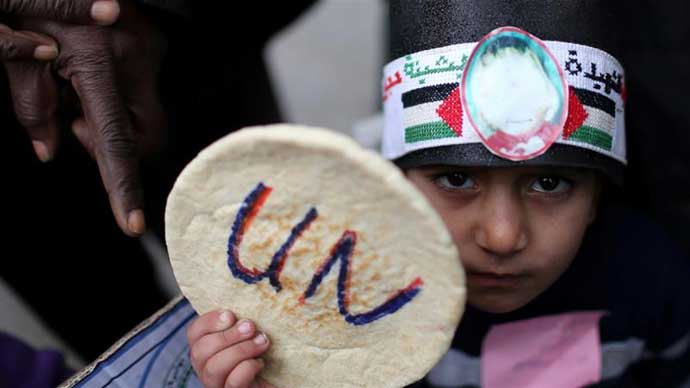 The seemingly interminable ordeal in Gaza has these episodic spikes. Photo: Reuters

At least 121 Palestinians have been killed and 10,000 others injured by Israeli troops, as protests continued along the border between the Gaza Strip and Israel. Notwithstanding sporadic inflections of aggression, there has been relative mundanity since the 2014 crisis. But the escalations have crossed the red line this time.

On May 14, the current bout of protests and violence witnessed 60 bodies being felled by the Israeli bullets. More than 40,000 people have congregated to protest the transposition of the US Embassy in Israel from Tel Aviv to Jerusalem, a city at the epicentre of the Palestine-Israel conflict. The Great Return March, as it was monikered, was aimed to draw attention to the 11-year blockade of Gaza by Israel.

It was supposed to be the epilogue of the seven-week long demonstration at the Gaza Strip border fence. Palestinians commemorate May 15 as the Nakba day or the day of Catastrophe. The day marks the exodus of Palestinians during the 1948 Arab-Israel war. The Nakba has its genesis in the Arab-Israeli war which began on May 15, 1948.

A day earlier, Israel had declared Independence as Mandate Palestine and with it the British Control of Palestine came to an end. Most of the Arabs inhabiting the area became foreign to their own lands and were expelled by Israeli forces. Several thousands were displaced again by the 1967 Arab-Israeli war. Today, some five million Palestinians inhabit pockets of Jordan, the Gaza Strip, West Bank, Syria, Lebanon, and East Jerusalem as registered UN refugees. On May 14, the current bout of protests and violence witnessed 60 bodies being felled by the Israeli bullets. Photo: Reuters

Israel says its actions are necessary to defend its borders, accusing Hamas of encouraging thousands of Palestinians to break through the border and attack Israelis. Unlike previous occasions like Operation Protective Edge in 2014, it does not have the pretext of rockets being fired by Hamas on this occasion. Even if a few people transgressed and crossed the fence, they could have been apprehended non-violently and returned. Several countries have condemned the Israeli havoc that has been wreaked on defenceless civilians and Israel is facing growing international calls for an independent investigation into live firing during the civilian protests.

However, it has not being adequately decried or demonised by popular media channels.

Last week, the United States voted against a Kuwait-drafted United Nations Security Council resolution exhorting the protection of Palestinian civilians. It was favoured by ten countries, including Russia and France. The Kuwait-sponsored draft called for an expeditious stop on “the use of any excessive, disproportionate and indiscriminate force” by Israeli. It also condemned the firing of rockets from the Gaza Strip at Israeli civilian areas. The Islamic Jihad and Hamas groups have since taken responsibility for such aggression as retaliation to Israeli offensive. US had created a huge hue and cry over the omission of Hamas’ name in the draft.

Washington DC characteristically drafted its own counter resolution demanding that Hamas and other Palestinian groups to cease provocation while being absolutely quiet on Israeli use of force on Palestinian civilians. Embarrassingly for US, the only country to vote in favour of its resolution was US itself, with 11 countries including Britain abstaining from the vote and three rejecting it downright.

The seat of General Assembly will be the next arena for debate. Interestingly, the 193-member body does not suffer from the tyrannies of veto power like the Security Council.

Approximately 7,50,000 Palestinians displaced in the protests, including the descendents of the originally displaced families, have claimed the right to return to their home which they were forced to abdicate. Currently, their houses are located inside Israeli land. None of the displaced persons were allowed to return to the their homes or communities and the subsequent war of 1967 only bolstered the ranks of homeless refugees.

Palestinian refugees’ right to return to their homes is well established in international law. The UN General Assembly Resolution 194 (III) Of December 1948 with UNSC Res 242 and 338 have been regularly evidenced as the basis for such inalienable rights. The rights outlined in these resolutions are inextricably espoused in international covenants on human rights and refugee law.

Since 1948, Israel does not recognise Palestinian refugees’ right to return. It is argued that if Israel agreed to repatriation of Palestinian refugees then it would have to relinquish the land that it seized during the1948 War. If they are allowed to return to their homes, the Jewish population of the area would become the minority. Thus, the Israeli stance stems from the fear of turning Israel into a bi-national state with a Jewish minority.

The United States has acted like a complaisant ally to Israel but has refrained from officially taking a stand against the Right of Return of Palestinians. However, US officials, much like Nikki Haley (current US Ambassador to UN) have pushed Palestinians to demit the right of return and turned the discourse into a political rhetoric than a humanitarian appeal.

In December, US President Donald Trump infuriated Palestinians by recognising Jerusalem as the capital of Israel. The US Embassy was moved there from Tel Aviv to Jerusalem in May as the inevitable and natural development and has been noted for a possible cause for escalation of demonstrations by leaders like French president Emmanuel Macron.

The conflagration on the border fence at Gaza is much more than a security defence. It is blatant genocide and unapologetic massacre of civilians. The juxtaposed broadcasts of Israeli and US officials celebrating the embassy opening in Jerusalem with 40,000 Palestinians embroiled in a virulent protest at the Gaza put the suffering of others into a new paradigm.

According to noted political scientist and Israeli scholar, Baruch Kimmerling, “Gaza is the largest concentration camp ever to exist”.The Israeli blockade is active in the north and the east; Mediterranean waters lie to the west and are devoid of ports. Finally, Egypt blocks the south where it is fighting its own battle against extremists in Sinai.

The rubble and ruins of the 2014 crisis are yet to be rehabilitated. Meanwhile, Palestinians do not even have a currency to transact in. US have slashed its contribution for UNWRA, the UN agency for Palestinian refugees and their descendants. Nearly one million people are dependent on UNRWA for survival in Gaza. Nearly 50 percent workforce suffers the burden of unemployment.

The gradual and seemingly more uninflammatory and palatable version of “Auschwitz”, where the Israeli blockade has not only imprisoned the native Palestinians but where Israel is tightening its vice-like grip to a choking point. Nearly two million Gazans, with more than half of them children, consume water that is reportedly 97 per cent contaminated. This unseen violence of penury and deprivation has already made the Gaza strip unlivable and unsurvivable.

The ever increasing population is circumscribed in continuously diminishing space with plummeting living index, including water et al. The only option for survival is to scratch, claw and haul oneself out of the concentration camp. It's not befuddling to assume many would risk death by scampering for an escape from the incarceration.

No one would have denied the same sacrosanct right to life and survival to the prisoners at Auschwitz or Dachau. Not even the most militant of Zionists or even Benjamin Netanyahu himself would dare make such a claim.

On the contrary, Israel is not even flapping an eyelid at the prospect of being pulled into the International Criminal Court on accounts of War Crimes and Crimes against Humanity with several of the top brass, including Israeli Prime Minister Benjamin Netanyahu vehemently standing in defense of its inhuman perpetrations.

They assert the country’s right to defend its borders and territorial integrity as per the operation of international law.

Megalomaniacal and mephistophelean dictators always pander to others of their own ilk. The mollycoddling of the empowered by the ones with still more power feeds off the disempowered. The unstatesman-like showmen of the US, Israel, Russia and even India have more in common than there geographical incongruity or culture diversity would suggest. Unfortunately, the popular wisdom seems to be succumbing to such idiosyncratic explanations and systematic political idiom.

Often the dangers of oppression by the gun-toting phalanx do not warrant from the perceived actions of the body of people across the fence but from the impassioned exhortation by the body of people behind it. The most nefarious though is the body of people on the sides either defending it or minting media currency by debating it as a spectacle. The abovementioned pieces of reckless and unethical journalistic coverage and even popular infractions need to be scrutinised and stamped out.

Media and the general onlookers need to hold the guilty accountable and bring them to light of justice and fairness.

The past two-and-half decades of peaceful negotiations and diplomacy has prevented an all out war but has provided disproportionate suffering and loss of life to the Palestinians. However, with disunited leadership of West Bank and Gaza, the Arabian countries seem to be more amenable to a solution which would be detrimental to Palestinian aspirations and struggle.

For Saudi Arabia and co., Iran seems to be a greater worry than the horrors in Palestine. With America as the interlocutor under the guidance of Donald Trump the signs may become ripe for a third Intifada. The battered bodies of Palestinians may resurrect with the spirit of revolt even though it may terminate with a bloody end.

The seemingly interminable ordeal in Gaza has these episodic spikes. It turns a few heads and puts few more fingers to the keyboard, including mine. Words are spouted and rebukes are launched. When the dust settles the bodies (or whatever is left of them) are buried and the war just goes on. Debate and spiel about the legitimate quantum of force and the international political law when ensconcing Gaza is an outrage to the fundamental and oft pronounced and promoted Universal human rights of millions of Gazans!

If the international community is serious about conflict resolution and establishing lasting peace or even some form of détente, it must recognise the Palestinians’ unassailable right of return and punish the perpetrators of such inhuman hostilities and massacre. Anything less is grand homilies and patent injustice and will only seed further carnage.