While the common people have largely welcomed the much-needed push for accountability, Kashmir’s “powerful and the mighty”, including politicians and some businessmen, are up in arms.

By virtue of the orders approved by the State Administrative Council (SAC) under the chairmanship of the Governor, the bank has been brought under the ambit of Right to Information Act (RTI), the Chief Vigilance Commissioner (CVC) guidelines and the state legislature. The development has taken place exactly when the previous Peoples Democratic Party-led government under Mehbooba Mufti has reportedly been accused of irregularly appointing over 2,000 undeserving candidates in the bank, besides recommending bank loans worth crores to her favourites, including a Chennai based brother-in-law, against disproportionate mortgage.

Thus, the PDP has reacted against the Raj Bhawan orders for apparently obvious reasons.

Spoke with @arunjaitley ji about the intrusive and regressive move to declare J&K Bank as a PSU. This decision will add to the woes of the state and alienate them further. The FinMin assured that the government will reexamine the matter.

The PDP’s arch rival in the state, National Conference, sounds no different. In fact, the NC left behind the PDP in taking out the first protest rally.

On November 26, in the wake of a separatist call for a “Kashmir bandh” against the “killing spree” in the valley, the NC leaders took out a procession in Srinagar — but in support of the J&K Bank.

On the same day, Awami Ittehad Party leader Engineer Rashid held a parallel protest. Interestingly however, unlike the NC, he struck a balance between the hartal call by separatists and his concern for the bank — Rashid dedicated his protest rally to both the issues.

Kashmir’s head priest and Hurriyat M Chairperson, Mirwaiz Omar Farooq, went a step further by saying that the decision could have implications similar to what was witnessed after the killing of Hizbul commander and poster boy of new-age militancy Burhan Muzaffar Wani.

Mirwaiz, whose father-in-law reportedly is a defaulter to the tune of Rs 5 crore at the J&K Bank, has threatened the government to be prepared for a “2016-like agitation” if the orders are not revoked.

Interestingly, the 2016- agitation, that left around a hundred civilians dead and more than 20,000 wounded in Kashmir, had finally ended when the government blessed veteran separatist leader Syed Ali Geelani’s grandson with a backdoor job. 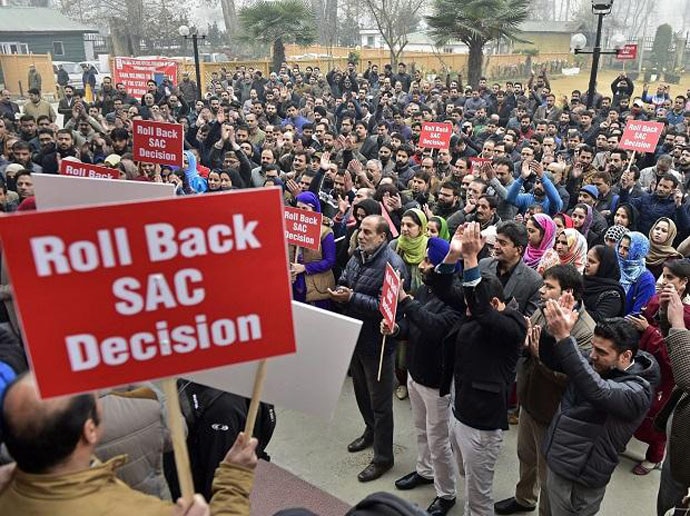 All India Jammu and Kashmir Bank Officers Federation protest against the decision in Srinagar. (Photo: PTI)

But then the stand of Kashmir’s business community looks shocking, with some business leaders saying outright that they are against accountability. Yes, you read it right.

The Kashmir Chamber of Commerce and Industries in a statement said it “opposes the decision of the State Administrative Council (SAC) to bring the J&K Bank Ltd under the purview of RTI, CVC.”

The KCCI has even criticised Governor Malik for his people-friendly decision of getting appointed 582 candidates who cleared exams and interviews, but were replaced with appointees recommended by politicians during the Mehbooba Mufti government.

The KCCI questioned these fresh employments, saying: “It is for the first time that Bank had to engage additionally 582 banking associates when they were not needed as per the requirements… Engagement of our unemployed youth cannot be resolved by providing the services in the Bank.”

As per news reports, the J&K Bank is in a bad condition mainly because of huge loans granted to some big names who didn’t pay back. As per the Times of India, the loans were even being diverted to the Middle East, something which sounds like a ‘reverse-Hawala’.

The TOI report said: “Interestingly, many of the valley hoteliers, who have defaulted to repay the loans have recently managed more borrowings from the bank and diverted the same loan amount to Dubai and other gulf countries for investment.”

The report also reveals that there are hundreds of willful defaulters from within and outside the state.

Established in 1938 by the then-Dogra Maharajas, J&K Bank is the only state -promoted bank in the country.

But the bank’s condition has reportedly turned so bad that its share value has dipped to Rs.39.5. As per news reports, the state government this year purchased its shares at Rs 79 and invested more than Rs 532 crore, which raised the government’s share in the bank to 59.3%. The bank allegedly saw irregularities in appointments and granting of loans during Mehbooba Mufti's tenure as CM. (Photo: PTI/file)

As per the Raj Bhawan, the move to bring the bank under ambit of RTI, CVC and state legislature aims to “insulate the bank from political influence used for backdoor appointments and sanctioning massive loans to big business houses” following reports of large-scale scams in the bank.

“Extension of RTI Act and CVC guidelines is only aimed at promoting Good Governance and transparency in the functioning of the Bank, as this premiere financial institution has often been questioned on both these counts by the general public,” an official handout has said.

With major shares lying with the government, J&K Bank is already supposed to be a PSU. But prominent economist and PDP leader Haseeb Drabu says treating J&K Bank as PSU would bring undue political interventions. Well, somebody should ask this former CEO of J&K Bank what made him resign from the chair in 2008, when the NC had come to power.

What’s wrong in J&K becoming a PSU? After all one of the largest banks in the subcontinent, the State Bank of India, is also a PSU. And then, why are only the influential sections of Kashmir up in arms? Why are common Kashmiris silent? And, why are Jammu and Ladakh silent altogether?

In a state with a population of over one crore, where almost every citizen bears a savings account in J&K Bank, why are common people not taking to the streets to join the cry of the influential few?

Is there something fishy here, that only Kashmir’s powerful are feeling insecure?

Also read: Why J&K Bank with 59% govt stake is a private sector bank

#Mehbooba Mufti, #Governor satya pal malik, #PSU, #Jammu and kashmir bank
The views and opinions expressed in this article are those of the authors and do not necessarily reflect the official policy or position of DailyO.in or the India Today Group. The writers are solely responsible for any claims arising out of the contents of this article.