Rajnath Singh says the BJP would strengthen sedition law against 'anti-nationals'. The Congress has promised to end the same law. These are two completely different ideas of India and our freedom.

While the Congress manifesto promises to abolish the sedition law if the party comes to power, in contrast, the BJP leader and Home Minister Rajnath Singh has promised that his party will make it more stringent, so that it would send shivers to the ‘anti-national’. Interestingly, his statement was made just when India commemorated the centenary of one of the darkest days of the British Raj — the Jallianwala Bagh massacre. 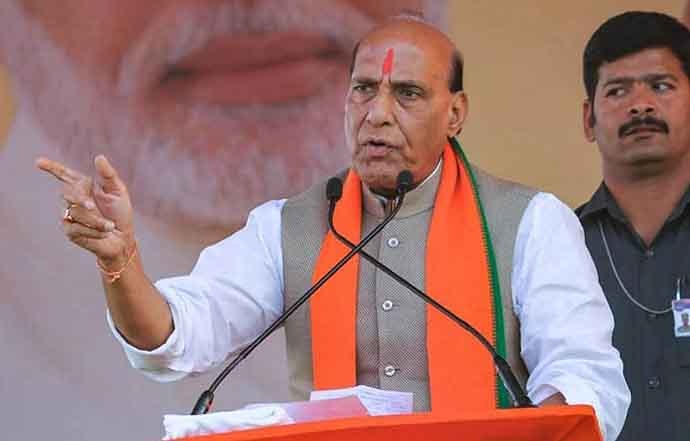 Rajnath Singh has said if the BJP is voted back to power, it will ensure the sedition law is further strengthened. (Source: India Today)

How are the three related?

That question took me back to the time I first visited Jallianwala Bagh in Amritsar. My visit to the site of one of the greatest events of violence faced by Indian freedom fighters was not what I had imagined it to be. Modern-day Jallianwala Bagh has become a tourist attraction, a picnic spot or a lover’s garden, with hardly a visitor aware of what it in fact represents.

The entrance to the site is a very narrow gully, through which an army troop can only march in, not leaving enough space for anybody to march out — which is what happened on the ominous day of April 13, 1919. Even today, the narrowing walls of the gully give a sense of fear as you enter. The gully opens to a big urban garden with mowed grass, trimmed bushes, flowers — and thousands of tourists, noisy kids, silly lovers, bickering parents. Immediately, your entire feeling of history and an eerie quality disappear. I was deeply disappointed with the chaos at the Jallianwala Bagh memorial and wished that people around me had empathy for the site and its violent history. I wished there was calm, and a sense of pain, grief and yet, pride for our martyrs’. I wished the visitors knew what they were looking at instead of being busy taking selfies with bullet marks.

On that ominous day, Reginald Dyer’s troops entered through this lane, closed it behind them and fired indiscriminately at unarmed gathered protesters. There is a plaque at the entrance which reads “People were fired from here”. As I stood in front of it, I tried to take myself to 1919 and understand who these people were, what they were trying to do and who fired upon them? As per the Civil and Military Gazette, April 1919, the ‘Punjab Disturbances’ started with the "arrest of Dr Saif-ud-Din Kitchlu and Mr Satya Pal, agitators against whom notice were served under Defence of India Act." With the arrest of two Indian freedom fighters, a Muslim and a Hindu — on sedition charges — people’s protests broke out against the draconian sedition law, also known as the Rowlatt Act — and the army was deployed to handle the ‘rioting mob’ under the command of brigadier general Reginald Dyer.

The civil protests by mostly unarmed Indian freedom fighters started from April 10, 1919, and various troops were deployed across Punjab to control the situation. One lieutenant general MO Dwyer that same day addressed a public meeting at the Montgomery Hall, where he boosted the ego of Indian soldiers of the British India Army by recalling their contribution in the World War. He then called the state-wide agitation against the sedition law as a “baseless agitation” by some people who want to “insult the gallant Punjabi Regiment” and asked for their help in putting the agitation to rest promptly.

On  April 13, 1919, at the Jallianwala Bagh among Dyer’s troops were 2-9th Gurkhas, the 54th Sikhs and 59th Sindh’s Rifles. These Indian soldiers, serving the British crown, were fully convinced that they were brave, honourable forces who were serving the rightful masters of their fate — and who then indiscriminately fired upon their own countrymen, women and children.

Instead of being reduced to any other tourist spot, Jallianwala Bagh should be a grim reminder of this army excess. The day April 13, every year, should remind us what happens when we allow too much eulogising and valorisation of the state and army powers. How our own were used against us by filling them with false pride and the valour of having served the army. How questioning the state was seen as ‘insulting the army’ and how acting well within the structures of settled laws of his time, police, army and courts, one hateful man could perpetuate unspeakable violence upon thousands of unarmed people.

The Jallianwala Bagh massacre should be a reminder about the need for a humane space for dissent, protests and agitation for all humans for all time to come.

It doesn’t matter whether it was colonial power then and a democratic government now — no state and army excesses can be allowed that violate basic human rights.

General Dyer’s excesses, although unmatched in terms of violence, are, to my mind, somewhat comparable to ex-army personnel Major Leetul Gogoi who used a Kashmiri man as a human shield — that was an inhuman act and we should never allow such excesses in a democracy. The Amritsar massacre was condemned by everybody from the British government to Indian civil society. Nobel Laureate Rabindranath Tagore gave away his Knighthood in protest of the massacre — thereby being, as I see it, the first member of the ‘award wapsi gang’.

The condemnation was unanimous.

But in modern India, right-wing forces celebrated Gogoi's inhuman act, in the name of army valour and national pride — and also hurled abuses against civil society members who condemned this, labelling them ‘anti-national’. The Jallianwala massacre is a reminder of the excesses of unquestioned state power. (Source: India Today)

But the Jallianwala Bagh massacre should remind us that questions of what is a nation, who is 'anti-national', how much army excess we should allow, are all fluid subjects — and humanity is above all this. At no point should the state or army assume such unhindered powers that they start shooting at protesting farmers or that agitators, dissenting students, academics and activists can be arrested on baseless sedition charges, or innocent Muslims arrested under the National Security Act and kept in jail without trial for years.

That brings me to the two political parties going to the national elections in the centenary year of the Jallianwala Bagh massacre — and their stated positions on sedition.

The Jallianwala Bagh massacre was caused due to the nationwide protests against the Defence of India Rules, also known as the Rowlatt Act, a law framed by the Rowlatt Sedition Committee to control ‘political terrorism’ (as the Indian freedom struggle was seen). It was designed to control and suppress all forms of dissent and revolt — using maximum force. Provisions of the law were inhuman and against basic principles of the right to life, liberty and equality. It was a law befitting an oppressive colonial regime a hundred years ago, which constantly saw the people as an enemy — but which has no place in a 21st century, mature, thriving democracy.

Ironically, we are so far removed from basic humanity today that merely for political one-upmanship, the BJP is promising that they will strengthen the sedition laws.

Nothing can be more sad — and dangerous — than this. The ruling government has failed on its promises to provide the people of India with basic requirements of jobs, economy, education and healthcare, so they are apparently trying to gloss over the same, using the same ploys that an oppressive regime once used to enslave us. The Congress, on the other hand, has at least wisened up and promised to abolish the law — and we should welcome this unanimously.

It should be noted that in the past, the Congress too has acted like oppressive colonialists, having drafted and imposed draconian laws like the Terrorist and Disruptive Activities (Prevention) Act (TADA) — but had rightly abolished it as there were rampant human rights violations.

Today, scared of a well-drafted manifesto, the BJP is reportedly alleging that the Congress abolished TADA because they are 'pro-terrorist'.

Such a mindset, where citizens are constantly seen as un-trustworthy enemies and inhuman draconian laws are seen as the only remedy, instead of dialogue and reforms, should make us ashamed of ourselves on this centenary remembrance of the Jallianwala Bagh massacre.

#Army, #Sedition Law, #Major leetul gogoi, #Jallianwala Bagh
The views and opinions expressed in this article are those of the authors and do not necessarily reflect the official policy or position of DailyO.in or the India Today Group. The writers are solely responsible for any claims arising out of the contents of this article.