In what seems to be the first major political development by the important mainstream parties in the Valley, six of them have come together and expressed their resolve to fight against the removal of J&K’s special status by the Centre on August 5, 2019.

The move resulted in months of lockdown, restrictions on people’s movement, a blackout of communication networks and other curbs. It also saw detention and arrests of scores of political leaders and workers from across the spectrum. 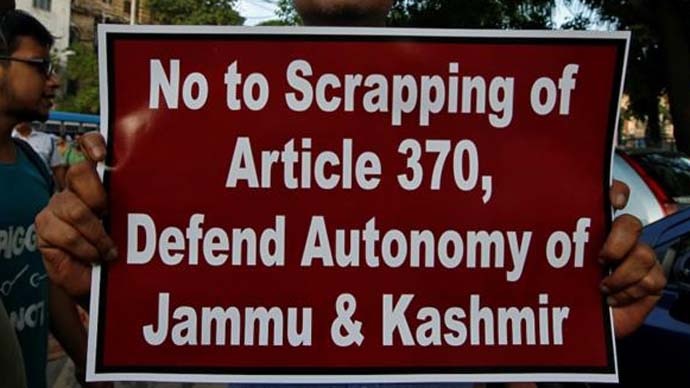 The move resulted in months of lockdown, restrictions on people’s movement, a blackout of communication networks and other curbs. (Photo: Reuters)

Last week was the first time since August 5, 2019, that these six mainstream parties came together. And the message is also very significant. The joint statement said that the “political activities will be subservient to the sacred goal of reverting to the status of J&K as it existed on August 4, 2019”. The declaration is signed by the National Conference, Peoples Democratic Party, Congress, People’s Conference, CPM and Awami National Conference.

So what does this mean in the scheme of things in the Valley? It is a no-brainer that Kashmir has been a difficult place for mainstream politics, specifically because of the raging conflict. However, for decades, the regional parties like NC and PDP have been trying to reach out to the voter base and draw support. The process has seen scores of their workers being killed. But they somehow managed.

These parties have been bordering their politics around the special status that the erstwhile state of J&K enjoyed — something that last year’s big move suddenly demolished in a single stroke. People who know Kashmir and its polity, opine that it is going to be hard for the mainstream political parties to go to the people because today they have been left with very little. They will have to reinvent themselves and their politics. This will greatly depend on the public mood and the process of building their trust. “I switched off my phone for many months. To be honest, I didn’t know what to tell anyone who would call me. Did we have anything to talk about?” said a senior mainstream political leader.

How the political process builds in the Valley is something one will have to keenly watch in the times to come; since few things are clear from the joint declaration signed by the bigwigs like Farooq Abdullah, Mehbooba Mufti, Sajad Lone and others. The line so far drawn is at the restoration of the special status of J&K. “We unanimously reiterate that there can be nothing about us without us,’’ read the statement.

There is a reason for them to draw this line. They know the public mood and they understand that the changes made are difficult to accept. Within these parties, there have been voices openly expressing concerns and warning the leadership against “any compromise” on the issue of Article 370 and special status.

Also Read | Examining the validity of Article 370: Why its abrogation and reorganisation of Kashmir violates the Constitution of India