From MUF to People’s Alliance, what are Centre's new challenges in Kashmir?

After the formation of the Muslim United Front (MUF) in 1987 to take on the NC-Congress alliance, leaders with divergent political views have come together as People's Alliance to resolve the Kashmir issue.

The People’s Alliance has not only demanded the restoration of Article 370, which they termed a constitutional fight, but put forth another demand — the resolution of Kashmir issue with all the stakeholders who are linked to the problem of J&K, which is the important takeaway from the meet. 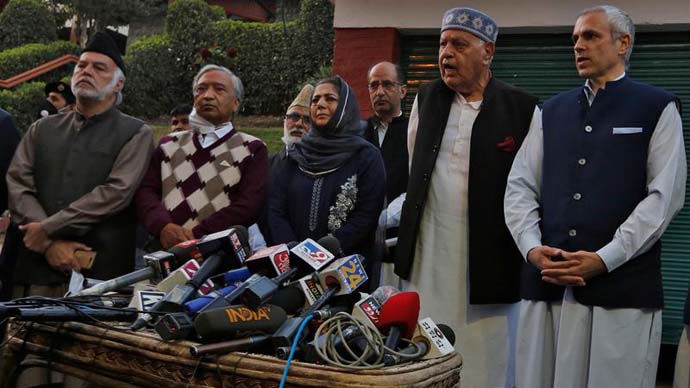 (From left to right) Muzaffar Shah of Awami National Conference, Mohammed Yousuf Tarigami of CPI(M), Mehbooba Mufti of PDP, Farooq Abdullah and his son Omar Abdullah of National Conference are some of the leaders who have come together to form the People's Alliance. (Photo: Reuters)

The only regional mainstream political force from the Valley that is not a part of the People’s Alliance is the newly-launched Jammu Kashmir Apni Party which is seen as close to the BJP-led government at the Centre. Apni Party is a group of former NC, PDP and Congress party workers who quit their parent parties and formed the new group after the abrogation of Article 370.

The Gupkar Declaration was a pledge by Kashmir's mainstream parties to defend Article 370 and 35A. The pledge was taken at a meeting held at Dr Farooq Abdullah’s residence on August 4, 2019 — a day before the state was stripped off its special status and split into two Union Territories (UTs).

It should not be seen as just another meeting, but as a historic event where the bitter political rivals of yesteryears came together. Such events are rare and historic. Who would have imagined two years ago that PDP and NC will one day tread the same path, together, to fight for the special status of J&K and the resolution of the Kashmir issue?

This is the second time since 1947 when a number of political parties of opposing political views came under one banner over an issue. In 1987, various political parties had constituted the Muslim United Front (MUF) to take on the NC-Congress alliance.

MUF's election manifesto underscored the need to resolve all outstanding issues of the Valley and was against any political interference from the Centre. The coalition mobilised support on the basis of Kashmiriyat and its grassroots campaign was said to be “enthusiastically energetic”, attracting the youth.

However, the large-scale rigging of votes in what is considered to be the most compromised election in the history of Jammu and Kashmir, left MUF winning only 4 of the 43 electoral constituencies it had contested, although it received a vote share of 31.9 per cent. On the other hand, it is widely believed in and outside official corridors, that the MUF may have lost approximately 13 seats due to electoral malpractice. The large-scale rigging led to the rise of armed rebellion in Kashmir. And the rest, as they say, is history.

So, the question that now arises is: Is the People’s Alliance the new MUF for New Delhi?

The People’s Alliance has renewed the same demand that MUF put forth three decades ago — the resolution of the Kashmir issue and lesser interference by the Centre. But the mainstream leadership realised that only after J&K was stripped off its special status, bifurcated into two UTs, and the humiliating lockdown and arrests that followed.

It will be interesting to see how the Centre reacts to the People’s Alliance. As Mehbooba Mufti put it: “We have to continue the struggle for now. I agree this won’t be easy on any of us. However, I am confident that our courage will help us sail through.”