Why New Delhi has failed to read crisis in Kashmir

Incoherent approach, lack of proper feedback, tendency to operate only through intelligence agencies and a weak Pakistan policy are taking their toll.

Lack of coordination on Kashmir Valley between Prime Minister Narendra Modi's office, the ministry of home affairs, the BJP and the strongly-embedded RSS' Valley network and finally the Indian Army in Kashmir are by all accounts the main reasons behind the latest crisis in the Valley, following terrorist Burhan Wani's killing.

Few have a clue as to what is happening in the name of Kashmir strategy as there is no wider consultation except with intelligence agencies. Senior hands, including diplomats, are amazed at the lack of consultation on the part of powers that be.

A glaring example of the limbo on Kashmir was a pernicious Bill that was brought late last month by the PDP-led government, giving veto to the government to interfere in every land sale and lease transaction.

Neither the BJP legislative party, nor the Central BJP leadership or the ministry of home affairs was aware of the Bill, till at the last moment some BJP MLAs read and raised a hue and cry. Ultimately, chief minister Mehbooba Mufti was forced to move the Bill to the Select Committee of the State Assembly.

Also read: How the State drove an embittered Burhan Wani to militancy

The Bill that makes it mandatory for every land and lease deal to seek government clearance, now hangs as a Damocles sword over the Jammu region. Most believe it is designed to be used against Jammu's Hindu population in future, if passed.

Says Sushil Pandit, an observer of J&K affairs: "The Bill clearly aims at choking the property transactions in the Jammu region and crippling the Hindus of the area economically. And its secret objective is to pre-empt any land right from getting created in future for the Hindus who were displaced from Kashmir due to militancy."

The situation has worsened following Burhan Wani's killing because PDP has lost support in its stronghold south Kashmir, the area of current uprising. It played the soft militant card earlier, with the help of Jamat-e-Islami cadres, as it did not have cadres of its own like the National Conference. 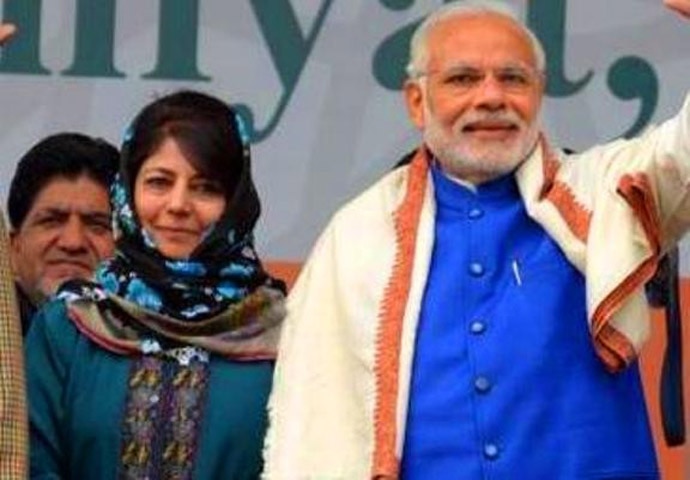 So when it joined hands with the BJP, the Jamat cadres deserted it. What has added to the situation is the PDP-led government's decision taken over a year ago to allow handing over of bodies of the killed militants to their relatives as a measure to woo Kashmiris. But it has produced results which are exactly the opposite.

The funerals of these militants are encouraging more Kashmiri youths to take to terrorism with Pakistan taking full advantage of it.

Says Pandit: "Imagine what would have happened had Afzal Guru's body been allowed to go to his village. Obama was not a fool to give a burial at sea to Osama Bin Laden."

In the last one year, bodies of more than 50 killed militants have been handed over to their families. Says a BJP leader: "Our Kashmir policy sometimes appears weaker than that of the Congress."

Also read: Burhan Wani's Kashmir is no land for patriots

The Jammu and Kashmir Study Circle of the RSS is largely believed to have grassroots knowledge of Kashmir and also the latest information on what is happening. But it operates as a separate body and is rarely consulted by the BJP or even the PMO and the MHA.

Instead of dealing on Kashmir with people who matter, the powers that be in Delhi deal only through the intelligence agencies, which is a major flaw.

As a result, whether it is the MHA, PMO or the BJP, they remain disconnected with the ground realities in the Valley. For example had the government and the Delhi leadership been aware of ground reality, then it could have organised a strong response on the very first day after Wani's killing.

Instead, it allowed the PDP to let the crowds to gather which saw the mobs gather in greater numbers and finally attack the police. Many believe the Internet should have been banned and curfew should have been imposed on the first day in Tral and adjoining areas.

More, at the diplomatic level too, there has been lack on urgency. The first statement of the ministry of external affairs to the Pakistani provocations on the recent Kashmiri imbroglio came a good 30 hours after Pakistan's first statement.

Says Arun Kumar, director of the J&K Study Circle and an expert on the Kashmir situation: "The situation is bad but not irreversible. The militancy affected areas cover less than 30 per cent of the Valley. But there is a need for greater coordination to deal with the situation."

Says an RSS leader: "These are kneejerk responses, instead of a sincere approach with wider consultation." Now consensus is building up at the Centre to go tough and reverse some of the soft decisions like giving back the bodies of the militants and also dealing more strongly with Pakistan.

Many of the key areas in this crisis were discussed by Prime Minister Modi on July 12 on his return from Africa tour.

Many in the Sangh Parivar as well in the diplomatic community believe Modi has erred in allowing his international considerations to dictate his Paksitan policy, which in turn can't be delinked from Kashmir.

Says senior diplomat Vivek Katju: "Dealing with Pakistan on the assumption that Army was on board with Nawaz Sharif was itself a mistake as the Pathankot attack proved. I don't buy that the recent uprising is a home-grown phenomenon. I see it as Pakistan-inspired. Our Pakistan policy has to be insular and not one dictated by international considerations if it is to succeed."

Another area of concern is the inability of the BJP leadership of Kashmir to deal with the PDP. It seems unequal to the task.

Some time ago the PDP replaced public voting with voting by the panchayat committee to elect a village sarpanch thus giving wide authority to the ruling party to manipulate and thrust its own sarpanch against the will of the villagers.

Throwing a spanner in a legitimate electoral process is fraught with danger as the rigging of the 1987  J&K election, allegedly by the Congress, had shown pushing Syed Salahuddin into the arms of the militants.

#Narendra Modi, #Mehbooba Mufti, #Burhan Wani, #Jammu and Kashmir
The views and opinions expressed in this article are those of the authors and do not necessarily reflect the official policy or position of DailyO.in or the India Today Group. The writers are solely responsible for any claims arising out of the contents of this article.