How Pakistan has dumped Hurriyat and Hizbul Mujahideen in Kashmir

From the sudden rise in the number of local militants killed to Geelani’s resignation, the apparent change in Pakistan’s policy towards Kashmir seems to be a majorly contributing factor.

At a time when the government forces launched a major offensive against the militants in Kashmir this summer, the sudden resignation of veteran separatist leader Syed Ali Geelani has added to the heat.

While 118 militants have been killed in the first six months of 2020, June proved to be bloodier with 48 such killings. According to Vijay Kumar, Inspector General of Police, Kashmir range, 107 of those killed were local militants and only 11 were foreigners. A majority of the slain militants were from Hizbul Mujahideen, the outfit which was traditionally seen as inclined towards Geelani.

From the sudden rise in the number of local militants killed, to Geelani’s resignation, the apparent change in Pakistan’s policy towards Kashmir seems to be a majorly contributing factor in this. After 30 years of romance, Pakistan seems to have dumped both Hizbul and Hurriyat alike. Among all the Hurriyat leaders, hardliner Geelani always had an edge. (Photo: Twitter)

On June 29, in a surprise move, Geelani resigned as chief of the hardline faction of the Hurriyat Conference, saying that constituents of the amalgam failed to lead the people after the abrogation of Jammu & Kashmir's special status, “overstepped the limits”, and tried to “create a parallel structure”. He also took a dig at the Hurriyat leadership in Pakistan and Pakistan-occupied Kashmir, calling it “just a representative forum” with “no power to take any decision” and using its influence to “get close to power corridors”. Unwilling to take responsibility for the “errors” of his colleagues, Geelani said, “It is beyond my capacity to be answerable to the faults and errors of my colleagues besides my own. You are free to make a decision for yourself... In view of the present circumstances, after pondering over the entire issue, I have decided to dissociate from the Hurriyat Conference.”

But then, much before the abrogation of J&K’s special status last August, the separatist politics was already losing the ground. Barring Geelani, most of the other top Hurriyat leaders were looking irrelevant.

Mirwaiz Umar Farooq, who heads the parallel faction of the Hurriyat, had been largely silent after being questioned by the National Investigation Agency (NIA) in April 2019.  Moderate Mirwaiz had become so feeble that by August 5, 2019, when Article 370 was abrogated, he wasn’t even seen as a potential threat by New Delhi anymore. And thus, while hundreds, including three former Chief Ministers, and even some schoolchildren were reportedly taken into custody, Mirwaiz was allowed to stay back at his home.

The third faction of the Hurriyat, jointly led by Shabir Shah and Nayeem Khan, on the other hand, has been a mess since 2017. In fact, it was after their differences with the other two Hurriyat factions, that both — Shah and Khan — landed up in Tihar jail on charges of money laundering that year. 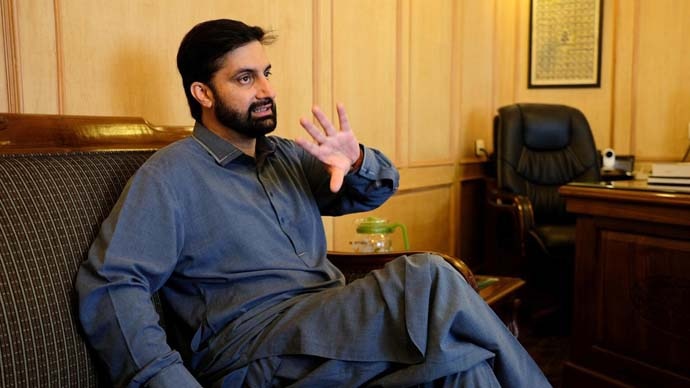 Mirwaiz Umar Farooq wasn’t even seen as a potential threat by New Delhi anymore when Article 370 was abrogated. (Photo: Reuters)

Among all the Hurriyat leaders, hardliner Geelani always had an edge — love him or hate him, you cannot ignore him, because of his influence on a considerable section of Kashmir society, especially the youth.

So, if Geelani has left the Hurriyat, the amalgam is now void of the crowd-pulling attraction. In other words, the Hurriyat factions have been reduced to a dirty banner, worthy of a probe for financial and other irregularities, as endorsed by Geelani in his two-page resignation.

But then, if pro-Pak Geelani had grievances with Pakistan, why were the same not addressed? Well, it means that Pakistan is no longer interested in pampering the aged leader or the Hurriyat factions.

Separatist politics, however, is not the only thing facing cold response from across the bloodied fence. On May 25, Hizbul Mujahideen (HM) chief Syed Salahuddin was reportedly hurt in an attack in Islamabad as a result of the “widening differences” between him and the Pakistan state.

Call it fate or coincidence, while Salahuddin was attacked, HM cadres in his native Kashmir were getting killed in encounters more rapidly than before. According to a recent news report in India Today, “Hizbul Mujahideen, the separatist militant outfit active in Jammu and Kashmir since 1989, maybe in terminal retreat.”

“The strikes in Shopian, Kulgam and Pulwama, considered the epicentres of homegrown militancy, have shaken the three-decade-old outfit to the core... For the Hizb, the losses have really mounted since their longest-serving leader Riyaz Naikoo was killed on May 6 in a joint operation of the police, army and the CRPF in Beighpora village of Pulwama,” the report said.

While Indian Army Chief, Gen MM Naravane, credits the cooperation and coordination between security forces for the militants’ killing, he also endorses tip-offs from locals, who he believes, are fed up of militancy.

But then, why would Pakistan suddenly behave in this manner?

Well, after the abrogation of the special status of J&K, The Resistance Front or TRF, a new militant outfit has surfaced in Kashmir and owned up to some of the deadliest attacks on security forces since then. TRF is seen as a shadow of Lashkar.

In May, the Hizbul and TRF quibbled over the credit for the deadly attack in Handwara town. Apart from two killed militants, one Colonel, one Major, two soldiers of 21 Rashtriya Rifles (RR) unit of the Indian Army and one sub-inspector of J&K Police lost their lives in that gunfight.

As per reports, the TRF mainly comprises heavily trained foreign militants. All this suggests that Pakistan doesn’t look ahead to rely on any homegrown leadership in militant or separatist cadres.

But will such a move benefit Pakistan? Or, will the Modi government translate it into an even dominant position in Kashmir? Well, only time will decide.

Also Read: With Geelani in back seat, will the Professor now drive Hurriyat?