Missing Hindus and Sikhs of Pakistan-occupied Jammu and Kashmir

This article has been co-authored by Shanmukh, Aparna, Saswati Sarkar and Dikgaj.

Indeed, the very name given – Pakistan occupied Kashmir (PoK) is a misnomer. A look at the map below shows that Pakistan occupied region of Jammu and Kashmir consists roughly the then districts of Bhimber (Mirpur, Kotli and Bhimber tehsils), Muzaffarabad (Muzaffarabad tehsil), parts of Poonch (Bagh and Sadhnuti tehsils), Gilgit and the Frontier Ilaqas, and Skardu and Baltistan part of Ladakh.

Of these regions, only Muzaffarabad (coloured red in the map), which constitutes a small fraction of the area, belongs to Kashmir region of the Jammu and Kashmir. Consequently, Pakistan-occupied Jammu and Kashmir (PoJK) is the accurate term. PoJK consists of Bhimber and parts of Poonch in Jammu, Muzaffarabad in Kashmir Valley, the whole of Gilgit and Baltistan areas in the north.

In the Gilgit and Baltistan areas, there were few Hindus and Sikhs outside state officials and armed forces. Originally Buddhists, these had been long converted to Islam before the 1947 war. However, Muzaffarabad, Bhimber and Poonch had significant Hindu and Sikh minorities. This is reflected in every census since 1881.

Reporting about the Sikhs, the census says, “The largest aggregations [of the Sikhs] are found in Poonch Jagir, Mirpur and Muzaffarabad… Whilst the main influx of the Sikhs to the country followed its conquest by Maharaja Ranjit Singh, there is evidence to show that there were Sikhs in small numbers in the country as early as the sixteenth century. Guru Nanak visited Kashmir and is said to have made converts.” p. 12, [2].

Consequently, it may be affirmed that the Hindus and the Sikhs did not constitute the seasonal traders, but were landed families too. This clearly indicates that the expelled Hindus and Sikhs did not constitute merely the refugees and seasonal traders, but established land owning classes too. This is confirmed in a cursory statement by Balraj Madhok who says about Hindus of Pakistan occupied Jammu region, “The situation in the Punjabi-speaking western districts of Mirpur and Poonch, including Bhimber and Rajauri, was different. This is a predominantly Muslim area. About a lakh of Hindus, who were less than 10 per cent of the total population of this region, constituted the business community though some of them tilled the soil as well.” p. 48, [1].

Later on, in this article, we shall see that the long-standing bonds with their Muslim neighbours did not save the Hindus and Sikhs.

Pakistani invasion of Jammu and Kashmir

In 1947, with the Maharaja of Jammu and Kashmir refusing to accede to either India or to Pakistan, the Pakistanis, in a bid to pressurise the Maharaja to accede to Pakistan, first ensured an economic blockade, then small-scale skirmishes at the border p. 15, [7], and then invaded the state using a combination of tribals and Pakistani troops. [Operation Gulmarg, under Major General Akbar Khan, who styled himself General Jebel Tariq, a product of the Royal Military College, Sandhurst, p. 16, [7], and had established his HQ for the purpose in Rawalpindi.]

Dr Karan Singh, in his autobiography recounts the horrors caused by the skirmishes that took place before the actual invasion, p. 54, [6] “Intelligence reports from the frontier areas of Poonch and Mirpur as well as the Sialkot sector started coming in which spoke of large scale massacre, loot and rape of our villagers by aggressive hordes from across the borders. I recall the grim atmosphere that began to engulf us as it gradually became clear that we were losing control of the outer areas.”

In pp. 83-85, [8], Jagmohan recounts how the first indication of the raid became apparent only on October 24, 1947 to the commanders-in-chief of the three wings of the armed forces in India. The Muslims, especially the Mirpuris and Poonchis, who constituted a considerable part of the Jammu and Kashmir state army, defected to the invading Pakistanis. 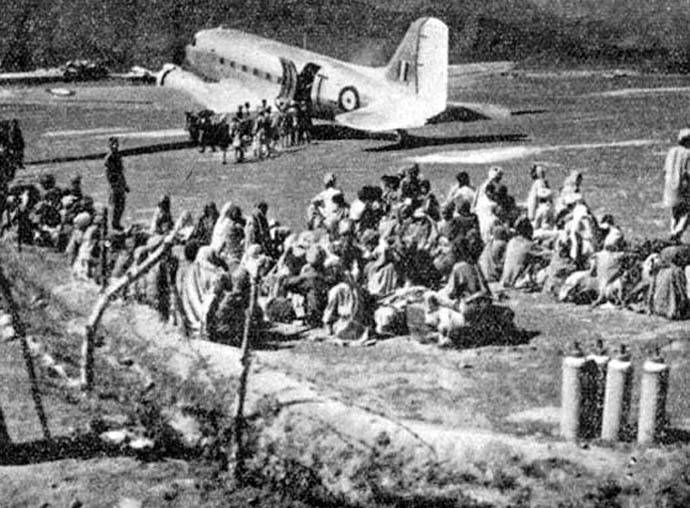 This is again confirmed by Dr Karan Singh, who relates, p. 56, [6], “The main recruiting area for the Muslim component of the forces had been the provinces of Mirpur and Poonch, from where several martial classes of Rajput Muslims provided also thousands of recruits for the Indian Army. With the creation of Pakistan, all those regiments opted for that country, and the people of these areas, directly contiguous to the new nation, and bound to West Pakistan by bonds of religion and family relationship, were naturally swayed against my father despite their traditional loyalty. Thus not only were the State Forces dangerously over-extended, but one third had in effect switched loyalty to the other side, and were waiting for the opportunity to defect.”

Colonel Narain Singh, the commander of Muzaffarabad, was shot by his own Poonchi Muslim troops, who slaughtered the sleeping Dogra soldiers p. 36, [7]. Even the personal Muslim friends of the Maharaja had melted away, including Effendi Bhaijan, who was close to Dr Karan Singh p. 54, [6]. The state troops in Gilgit and the subsidiary Rajas of the north revolted and a Pakistani “political agent” was invited there.

In this context, it is important to note the role played by the British. Both Lord Mountbatten and Sir Rob Lockhart, viceroy and commander-in-chief of the Indian army claimed no knowledge of the impending invasion till Muzaffarabad had been sacked by the raiders p. 19, [7]. Even field marshal Auchinleck did not even call India’s attention to a possible Pakistani invasion of Jammu and Kashmir before October 24, 1947.  p. 21, [7].

General Sir Frank Messervey (commander in chief of Pakistani army) and General Sir Rob Lockhart used to have long telephonic conversations, but neither alerted the Indians to the danger to Jammu and Kashmir. Neither did Sir George Cunningham, the governor of NWFP, from where the raiders were brought to invade Jammu and Kashmir p. 21, [7].

In 1935, the British had taken Gilgit under lease for 60 years and raised an irregular force, the Gilgit scouts, officered exclusively by British officers, to deal with the Soviet presence in Eastern Turkestan.  The Gilgit Scouts opted to serve Pakistan when the lease ended in 1947 (due to British exit from India).  The Maharajah’s Governor of Gilgit, Brigadier Ghanshara Singh, had his home surrounded by the Gilgit Scouts and he and his administration were made prisoners. A provisional government was installed and the British Commandant of the Gilgit Scouts, Major Brown, hoisted the Pakistani flag in his lines of command and on November 21, 1947, a Pakistani political agent arrived and established himself in Gilgit.

Effects of the Pakistani invasion

The Pakistani invasion of 1947 devastated the Hindu and Sikh communities of PoJK to the extent that there are no more Hindus and Sikhs left in PoJK [3]. The atrocities perpetrated by the invaders, who often stayed behind to loot the towns they “liberated” has been pointed out to in [7]. Jagmohan points out that when Baramulla fell to the invaders, the horrors were recounted by the New York Times correspondent, who wrote, “Surviving residents estimate that 3,000 of their fellow townsmen, including four Europeans and a retired British officer and his pregnant wife, were slain.” p. 87, [8].

Several indignities were heaped on Hindu and Sikh women, who were often sold in bazaars of Peshawar, Jhelum and Rawalpindi. pp. 50-51, [1]. The suffering of the Hindus and Sikhs in the wake of the Pakistani invasion has been eloquently catalogued by Krishna Mehta [4], a survivor of this genocide of Hindus and Sikhs, who narrates her own personal experience when she fled from pillar to post, with local Muslims fleecing the hapless Hindus often and the Pakistani raiders and Kashmiri defectors slaughtering all the Hindus and Sikhs they could lay their hands on.

Hindus and Sikhs of Pakistan-occupied Jammu and Kashmir:

From the census of Jammu and Kashmir, 1941 [2], we find the following numbers for the Hindus, and Sikhs of/in the affected areas.

From the above table, it is clearly observable that the total number of Hindus and Sikhs in the regions overrun by the Pakistanis constituted 84,806 and 33,525 respectively in 1941. The decadal growth rates of Bhimber, Muzaffarabad, and Poonch in 1931-1941 were 12.15 per cent, 9.39 per cent and 8.89 per cent respectively. The numbers of Hindus and Sikhs in Gilgit and Ladakh are very small, and seem to have been comprised of the state armed forces and state officials often, so the growth rates do not apply here.

The annual growth rates turn out to be 1.28 per cent, 1.25 per cent and 1.24 per cent respectively for the districts. Assuming that the growth rates of the previous decade held (which is conservative, since with improving medical facilities, the growth rates generally improved across the state), we find that the number of Hindus and Sikhs in Bhimber, Muzaffarabad, Bagh and Sadhnuti to be 87,391 and 34,591 respectively.

There are no estimates of Hindus or Sikhs left today in the region and the entire population is assumed to have either been expelled or killed. Snedden, who surveyed the region (published in [3] in 2012), does not mention any Hindus or Sikhs in PoJK. Consequently, a rough figure would be 1.225 lakhs to be the number of Hindus and Sikhs who went missing from PoJK. This is the base figure of the Hindu and Sikh residents of PoJK. However, thousands of Hindu and Sikh refugees had flooded the border towns (now in PoJK) in the wake of the Partition.

Madhok points out that Bhimber had at least 2,000 refugees, Mirpur had at least 15,000 refugees, Rajouri had 5,000 and Kotli, an uncounted number. Almost all refugees (along with Hindus and Sikh residents) of these towns, with the exception of those in Kotli, perished. pp. 50-51, [1].

Consequently, a figure of 1.5 lakh seems the base figure of missing Hindus and Sikhs from PoJK. Even the notoriously pro-Pakistan Alastair Lamb has conceded that at least 60,000 Hindu and Sikh refugees fled Poonch and Mirpur areas p. 63, [5].

It is interesting that Pakistan, to this day, complains of the expelled and/or killed Muslims of Jammu, but no mention is made of the unfortunate Hindus and Sikhs of PoJK by the Indian government. Further, the Indian government made no great efforts to retain even the Hindu regions of Jammu and Kashmir, not even the Bhimber tehsil of the PoJK. Bhimber tehsil consisted of a total population of 1,62,503 and Hindus constituted 48,666 and Sikhs an additional 8,469, making Hindus and Sikhs 35.16 per cent of the population of the tehsil cumulatively.

However, it was overrun by the Pakistani raiders in the early days of the war in 1947, since Pakistan had easier access to the region and the Indian and Jammu and Kashmir state armies did not have similar easy access from Jammu. It was never recovered by the Indian army.

Nehru cabinet allowed Sheikh Abdullah to oversee the army operations and the focus of the army was, consequently, heavily on the Kashmir valley, leaving the other regions of Kashmir to the Pakistani mercy. The end result was that the entire region of Gilgit, Skardu region of Ladakh and large regions of Jammu, including areas that had large Hindu and Sikh populations, were left to Pakistan.

[8] Jagmohan, My Frozen Turbulence in Kashmir.

#Sikhs, #Hindus, #Gilgit-Baltistan, #Pakistan
The views and opinions expressed in this article are those of the authors and do not necessarily reflect the official policy or position of DailyO.in or the India Today Group. The writers are solely responsible for any claims arising out of the contents of this article.