The situation in trouble-torn Jammu and Kashmir, India's only Muslim majority state, seems to be getting worse. The PDP-BJP coalition government is facing an uphill task to contain the deteriorating situation.

The PDP, which was earlier known for its soft-separatist stance, mainly represents the Kashmir valley while the BJP represents Jammu and Ladakh regions. Kashmir valley is largely a Muslim region and Jammu is a Hindu majority region with a chunk of Muslim and a sizeable Sikh population. The third region - Ladakh - has Muslim (mostly Shia), Buddhist and Hindu population.

It seems the marriage between the ruling alliance partners haven't been received well by the people of the state. While the BJP is facing pressure from the people of Jammu and Ladakh for allegedly ignoring the development of the two regions, the PDP too is losing its base rapidly in the Valley as majority of them are angry with Mehbooba Mufti's change in stance - from pro-separatist stance to a pro-India - and her strong handling of the separatists and stone-pelters. 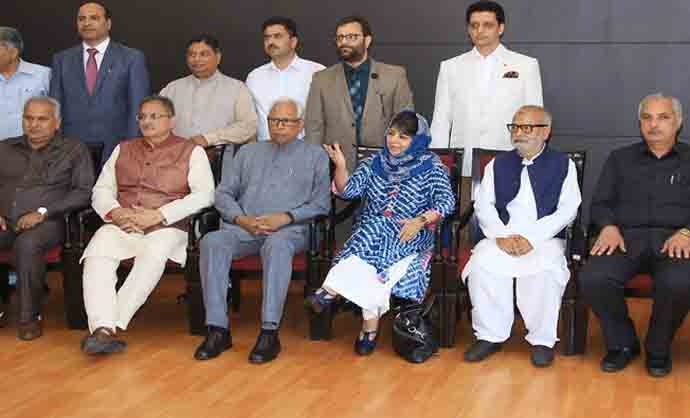 J&K governor NN Vohra and CM Mehbooba Mufti with the newly appointed ministers after a reshuffle in Jammu on April 30. (Credit: PTI photo)

In the past three years while the BJP and the PDP were busy managing their alliance, the state has seen a considerable rise in militancy in the Valley. According to data presented by the chief minister in the state legislature, as many as 66 youths joined militancy in 2015, 88 in 2016, and 126 in 2017. These figures clearly point to the rising separatism in the Valley. According to the Union home ministry, the state witnessed 342 terrorist attacks in 2017, a rise from 322 in 2016 and 208 in 2015.

Last year, the state witnessed civilian deaths numbering to 40, highest among the past five years. However, Indian security forces got a major breakthrough in eliminating 213 militants in 2017 compared to 150 in 2016 and 108 in 2015, with a reduction 2.44 per cent casualty of security forces. Despite that, the Valley's ground remains fertile for the growth of separatism with the rise of stone-pelters who tend to protect the terrorists from the bullets of the security forces even at the cost of their own lives.

On the other hand, the Hindu-majority Jammu, which became the hometown of Kashmiri Pandits who were forced to move away from the Valley, is apprehensive of the "rising presence" of Rohingya refugees in Jammu. The Jammu residents see it as a ploy of the anti-India forces to alter the social demography by sheltering Muslim Rohingyas in the region. Even security forces fear the hand of ISI agents brainwashing the migrants.

There have instances that raised concerns among the security agencies. In 2015, a militant killed by security forces in South Kashmir originally belonged to Rakhine, the epicentre of Rohingya crisis in Myanmar. According to an RTI report, 27 Rohingya families residing illegally in Jammu owned SIM cards. The revelation raised eyebrows as to how the SIM cards were obtained, given that Rohingyas don't have citizenship documents.

Added to all that, the recent brutal gang-rape of a minor Muslim girl in Kathua, Jammu, has exposed the ever-widening fissures between Hindus and Muslims in the state. The people of Jammu demanded a CBI inquiry (still demanding) instead of a state police probe due to their distrust in the CM.

This shows that the people have lost confidence in the state government. Mehbooba Mufti should have sensed the concerns of the Hindu majority Jammu residents. PDP's junior partner BJP too has failed to honour the aspirations of the people. To make matters worse, the BJP recently inducted Rajiv Jasrotia, BJP's Kathua MLA – who took part in the rally organised by Hindu Ekta Manch (HEM) seeking a CBI probe into the rape and murder of the eight-year-old girl – into the council of ministers besides some other pro-Hindutva faces.

What's more, within an hour of the cabinet shuffle in Jammu and Kashmir on April 30, the new deputy chief minister, Kavinder Gupta, shocked everybody with his statement on the Kathua rape and murder by calling it a "chhoti si baat (minor issue)".

Jammu and Kashmir needs a strong political desire to root out the mess created by separatism and divisive politics in the state, which is today more divided than ever under the PDP-BJP alliance government.