They are well on their way to become the new Taliban.

The controversy regarding an advertisement in local dailies in West Bengal by the popular salon chain Jawed Habib has attracted some attention. The advertisement shows the retinue of Durga, her children and their vahanas visiting a Jawed Habib parlour to get decked up for their visit to the earthly domains. The illustration is wonderfully detailed, cheeky, true to its product placement and brings out the mood of festivity that is inherent in the celebration that marks the arrival of the goddess to her mother's house.

This motif is no different from the spate of popular art that is seen across West Bengal in this period. It is no secret that Durga Pujo is a major festival in the state and a time for commemoration, carnivalesque fun and reunion among families and friends.

In living memory, Durga Pujo has never, and I repeat never, been a religious festival with dogged adherence to rituals and ablutions. The adherence to a religious stricture is merely a formality, if not a passable habit. Exceptions are of course there but largely the Pujo holiday season is about people congregating at the local pandals, visiting families and friends in new clothes and accessories, binging on whatever they can lay their eyes on and generally chilling out for those four or five days.

The history of the festival is not necessarily secular but over the years, the Pujo has become an increasingly secular carnival whose dominant mojo is commerce.

No other time of the year attracts as much one-time spending as does the Pujo fortnight.

During this time, Kolkata's already ungainly face is blanketed with humungous billboards, topsy-turvy cut-outs and kitschy danglers that peddle anything between serpentine luxury residences and pointed shoes, blingy souvenirs and trinkets to detective thrillers and fitted denims.

The adverts very often feature the likelihood of the goddess and her family in amusing poses and witty theatrics. The covers of Pujo specials of literary magazines, of which there are several, often feature the pantheon draped in the latest sartorial fashions - wearing shades, dancing with guitars, driving the motorcar, drinking a Cola and so forth.

So Habib's advert is much in keeping with a tradition of both fun and commerce rather than breaking any. 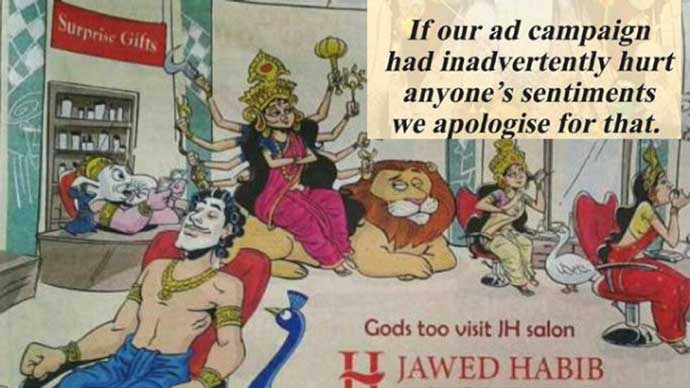 So, why the controversy? Because, in this age of instant social media outrage, some ignoramuses have objected to the Jawed Habib advert, claiming that their Hindu emotions were hurt by it. Ask any of these supplicants of the Hindu Right about the history and sociology of the festival in West Bengal and they will fall short of words.

But then trolls have never been known for their informed ideas or powers of debate. They troll because they are paid to do so or as they have rented out their pigeon-sized brains to a political party and its righteous ideology.

Unfortunately, they have also been able to successfully extract an apology from Habib and the advertisement has been withdrawn from the public domain.

Dear all, we respect your sentiments and we apologize sincerely. It was not to hurt you at all.

Most Bengalis I know have been outraged by the trolling. I will not go the way of launching a proclamatory avalanche on how West Bengal is different, and progressive compared to, say, North India - our state is comfortable in a cultural practice that domesticates and humanises the Durga Pujo.

Just like Bengalis barely know about the subversive mythology of Onam or the ecological origins of Bihu, those in the northern states is unlikely to know about the great Bengali tradition of Durga Pujo.

To make fun of the ignorant, distant troll for their cultural illiteracy would be falling into the same illogic that Hindu cultural chauvinism thrives in.

The real question is, are all the trolls from distant, "dogmatic" lands? Purportedly no. There is no exact number but it is unlikely Habib would have withdrawn the advert had he not sensed local participation in the protestations against the commercial. And he cannot be faulted for sensing the same. First, no one knows it better than him that it would be easy for the Right to muddy his Muslim name; second that he has to, after all, defend his business from potential mob violence; and third, that similar protestations to that effect have taken place in the heart of Kolkata a week or two ago.

A group of saffron hoodlums had ganged up on the streets to pour their outrage against a cover of a Bengali Pujo special published by the state's best-known media house. The cover carried an illustration of a woman in diaphanous clothing, revealing the curves of her torso. The protestors considered this image as an illustration of Durga and were incensed at her nakedness. The local BJP, needless to say, played its part. Habib, hence, took no chances.

I would like to take this opportunity to remind the Bengali or Bengal-based bhakts a few things. First, the tradition of making fun of the Hindu pantheon, inside and outside the iconology of Durga Pujo is an old one.

In 1889, in spite of those being the heydays of Hindu revivalism in Bengal, Durgacharan Roy published a satirical novel called Debgoner Morte Agomon [When Gods Came Down on Earth]. The novel chronicles the travails of a gang of Hindu Gods, led by the all-knowing Brahma, who descend upon Earth to have a close look at Kolkata.

They are completely befuddled by what they see and Kolkata's eye-popping glamour leave them breathless. They return to their abodes wanting to set up a museum and court of justice in the heavens. This idea continues in novels and short stories, specially from Rajsekhar Basu and in movie comedies like Jomaloye Jibontomanush, where two mortals accost a group of bumbling gods in the underworld.

In calendar art, adverts, book covers, movie posters and countless other literary accounts, gods and goddesses of the Hindu pantheon - much like the ghost in Bengali literature - are a neighbourly, familial, comic series of figures.

Sacred sermonising is a minor detour in Bengali depiction of the known gods and goddesses. The Durga Pujo is an extension of it and must stay that way.

Second, by violently demanding to ban anything that hurts their fake sentiments, the so-called re-born defenders of the Hindu faith are, in fact, mirroring their exact other, the Taliban.

The Wahabists have made an industry out of their inability to tolerate humour. The bhakts are well on their way to become the new Taliban.

Third, and finally, the right to offend is an inalienable right - so it is for Charlie Hebdo, so it is for anyone else. If one group has taken over the right to perpetuate the canon, the other has a fundamental right to question, critique, humour or offend the same.

Orthodoxy breeds no equity. The contempt of orthodoxy is hence a sacred responsibility of the secular public.

Also read: Why I disagree with people wanting to block Narendra Modi on Twitter

Post your comment
#Durga Pujo, #Jawed Habib
The views and opinions expressed in this article are those of the authors and do not necessarily reflect the official policy or position of DailyO.in or the India Today Group. The writers are solely responsible for any claims arising out of the contents of this article.

Sayandeb Chowdhury is Assistant Professor at at Ambedkar University, Delhi