What The Wire story alleges against Jay, Amit Shah’s son

On Sunday, October 8, The Wire published a piece alleging an exponential “16,000 times” growth of a company, Temple Enterprise, co-owned by Jay Shah, son of BJP national president Amit Shah, “after” Narendra Modi became the prime minister of India. Titled “The Golden Touch of Jay Amitbhai Shah”, the story by former Economic Times journalist Rohini Singh alleged that the “revenue from the company owned by Amit Shah’s son jumped from just Rs 50,000 to over Rs 80,00,00,000 in a single year”.

While the story went viral on social media, it also elicited a strong reaction from the Opposition, the Congress party held a press conference by former Union minister Kapil Sibal. On the other hand, it was dismissed by the BJP, with Union minister for railways Piyush Goyal, who’s also the party’s national treasurer, telling the media that the charges were bogus and Jay Shah’s balance sheet and tax returns were perfectly in place.

This allegations of corruption and the resultant declaration of the intention to file a civil and criminal defamation suit made it to the front pages of almost every national daily today. However, it’s important to break the story down to understand the allegations made against Jay Shah and associates, as well the counters offered by the BJP, which fielded a Union minister to defend the “private citizen”.

Two, Jay Shah’s Temple Enterprise received an unsecured loan of Rs 15.78 crore from KIFS Financial Services, a non-banking financial services company (NBFC) owned by Rajesh Khandwala, who happens to be the in-law of Parimal Nathwani, a Rajya Sabha MP from Jharkhand who is a senior functionary of Reliance Industries’ Gujarat operations.

Three, Temple Enterprise, which [was] “in the business of import and export of agri commodities like rapeseed DOC, castor DOC meal, desi chana, soyabean, coriander seeds, rice, wheat, maize etc”, according to Jay Shah’s lawyer’s statement to The Wire, was wound up in October 2016, despite the turnover of over Rs 80 crore.

Four, another company, Kusum Finserve – a limited liability partnership incorporated in July 2015 with Jay Shah owning 60 per cent stake in it, and converted into an LLP from a previous private limited company – while stating that its main business was “trading in stocks”, according to its filings with the Registrar of Companies (RoC), obtained a loan of Rs 25 crore from a cooperative bank – the Kalupur Commercial Cooperative Bank. 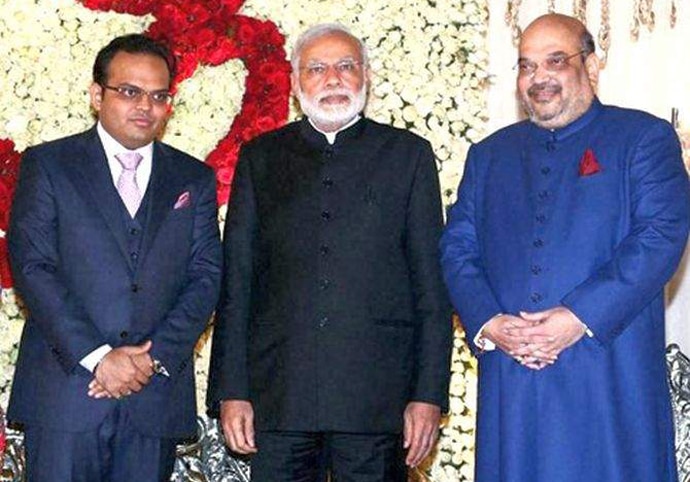 Jay Shah’s Kusum Finserve also received a letter of credit (LC) of Rs 10.35 crore from Indian Renewable Energy Development Agency (IREDA), a “mini-ratna”, according to its website, and under the Union ministry of new and renewable energy, “for setting up a 2.1 MW wind energy plant” worth Rs 15 crore in Ratlam, Madhya Pradesh. The Wire.in mentions that Piyush Goyal, the current Union railways minister, was in charge of the ministry of new and renewable energy when the LC worth Rs 10.35 crore was extended to Jay Shah’s Kusum Finserve.

Reactions to the story

The BJP held a press conference last evening, and Union minister Piyush Goyal rubbished the story by The Wire, saying Jay Shah would file Rs 100-crore defamation suit against the reporter Rohini Singh, the editor of the portal, and its owners.

We reject any allegation sought to be made against Shri @AmitShah's son Jay Shah : Shri @PiyushGoyal https://t.co/wYVSj5y2wD pic.twitter.com/ZsxI6YH992

Goyal termed the allegations as “derogatory, defamatory, hallowed and baseless”, adding there’s “absolutely no substance whatsoever”. Goyal said: “Mr Jay Shah, son of Amit shah, has decided to file criminal defamation suit against the author, editors and the owners of The Wire. They shall be prosecuted for criminal defamation and sued for an amount of Rs 100 crore in the Ahmedabad court.”

A website which is unabashedly pro-Modi government, OpIndia.com, published a rebuttal as well, in which the authors said that while The Wire story mentions the revenue, it fails to mention the “expenses incurred”, which the site puts at Rs 81.99 crore, with a net loss of Rs 1.48 crore. The OpIndia piece says that story is “low on facts, high on innuendo”, because, according to it, “revealing such information would puncture the entire narrative that Jay Amit Shah’s business was successful just as Modi came into power”. OpIndia also adds that NBFCs such as KIFS, owned by Khandwala, are in the business of extending loans greater than the sums of their net revenues because that’s “their job”.

On IREDA, OpIndia says the public enterprise is meant “to promote, develop and extend financial assistance for renewable energy and energy efficiency/conservation projects. It has sanctioned around Rs 37,000 crore of credit for clean energy projects so far and further Rs 28,000 crore to developers, which aids generation capacity of around 7,000MW. It plans to sanction around Rs 13,000 crore this financial year”.

In addition, additional solicitor general Tushar Mehta has publicly stated that he might “defend Jay Shah in court”. What’s interesting is that Mehta obtained the “permission from law ministry” on October 6, two days before the story was published by The Wire. Siddharth Varadarajan, the editor and co-founder of The Wire, tweeted why “private citizen” Jay Shah was consulting the government lawyer instead of consulting his CA (chartered accountant), posting a screenshot of the (very polite) correspondence between Rohini Singh and Jay Shah on WhatsApp.

On the IREDA issue, the Congress party owned newpaper, National Herald, makes an important observation. It says that IREDA can only sanction projects up to 1MW, while Jay Shah’s company, Kusum Finserve, submitted a proposal for a 2.1-MW plant in Ratlam, Madhya Pradesh. While the IREDA can loan up to 70 per cent of the total project cost, which should have been roughly Rs 4.9 crore for the 1-MW limit it can officially sanction projects for. However, the IREDA gave a letter of credit worth Rs 10.35 crore, in “violation” of its rules.

Congress has asked for an inquiry into the matter, with Rajya Sabha MP Kapil Sibal asking PM Modi to launch a CBI investigation into the dealings of Jay Shah. The Congress press conference on October 8 can be accessed via this tweet from their official handle:

Congress vice-president Rahul Gandhi tweeted on Sunday bringing in the D-word - demonetisation - into the equation, perhaps suggesting the company shut down in October 2016, right before PM Modi’s note-bandi diktat on November 8, 2016.

We finally found the only beneficiary of Demonetisation. It's not the RBI, the poor or the farmers. It's the Shah-in-Shah of Demo. Jai Amit https://t.co/2zHlojgR2c

Rohini Singh, the journalist who filed the story for The Wire, had also broken the Vadra-DLF sweetheart deal story, making it a political rallying point for the then Opposition in the BJP. It must be noted that Singh doesn’t mention the word “scam” or “illegal” anywhere, but only highlights the amounts transacted, the loans/credits extended and in what circumstances.

While Jay Shah is being defended as a “private citizen” and is being shielded for his “fundamental right to privacy” (ironical, given the government’s official stand on the privacy battle fought in the Supreme Court very recently), the fact that he’s related to a very public figure being the son of the BJP national president Amit Shah is enough to bust that claim, which is why he must be ready to be held up for public scrutiny.

Post your comment
#Right to Privacy, #Temple Enterprise, #BJP, #Jay Amit Shah
The views and opinions expressed in this article are those of the authors and do not necessarily reflect the official policy or position of DailyO.in or the India Today Group. The writers are solely responsible for any claims arising out of the contents of this article.