Many women wept over her demise but do they know how many of their kind she let down?

Several journalists and ordinary citizens commenting on social media have been praising Jayalalithaa, who died earlier this week, for having overcome patriarchy to rise to the chief minister's position, for having been a stern administrator and initiating schemes to help women and children.

The schemes include the hugely popular "Amma Unavagam" or Amma canteens (Amma or "mother" referring to Jayalalithaa herself) employing women for the most part. Videos and photographs have proliferated showing large numbers of women weeping uncontrollably during the last days of her life and after her demise.

However, as with several other women politicians who not only rose to the highest positions in their lands, but also exercised near-absolute power, that is women such as Indira Gandhi and Margaret Thatcher, she did little to challenge patriarchal structures in society and was no champion of feminism or other progressive causes.

She sure did dole out much largesse at state expense through her various schemes - some of it of dubious social value such as "Thalikku Thangam Thittam" meaning gold for marriage, which only reinforced existing cultural practices that progressive thinkers would frown upon.

She did little to empower women or help them become economically independent. Her party, the All India Anna Dravida Munnetra Kazhagam (AIADMK), and its arch-rival Dravida Munnetra Kazhagam (DMK) are not exactly known for fostering trade unionism or championing workers' rights even though both parties have been exceedingly vocal in stating that they uphold the cause of the "thozhilazhi" - meaning the worker - one that generously peppers their leaders' fiery speeches. She did little to empower women or help them become economically independent. Credit: PTI

Female workers have been severely neglected, a fact that emerged in stark relief during a fact-finding mission of academics and human rights activists in July 2013, which looked into the conditions of garment workers at factories that supplied to the France-based supermarket chain, Carrefour.

The mission was sponsored by the Paris-based FIDH (International Federation for Human Rights) and its report was published a few months later. This writer joined two academics from France and Finland and a human rights activist from Spain, who was then on the staff of FIDH, in visiting factories, workers' hostels connected to them and villages in some districts of western Tamil Nadu, as well as activists from trade unions linked to Left parties and NGOs working on labour issues.

The fact-finding report "identified serious human rights concerns on textile factories' work-floors and hostels duringits mission and as a result of interviews conducted with local trade unions, NGOs and experts. Precarious employment and working conditions continue to be commonplace. Disproportionate use of contract labour and apprenticeship, stripping workers of legal protections and benefits, as well as overtime work and salaries below minimum wage are among the issues prevailing in garment factories.

Garment workers can be subject to an alarming level of control both within factories and at hostels, including thorough restrictions on their freedom of movement and communication outside the factory.

Garment factory facilities such as "doctors' rooms" and toilets were found empty in every factory visited, which may indicate an intense pressure to maintain high productivity.

Of course, one of globalisation's fruits - namely the failure to respect trade union rights and resulting exploitation - are hardly confined to Tamil Nadu or India as a whole, but something all too visible in Bangladesh, Cambodia, Vietnam and China as well as other countries.

But Tamil Nadu and other parts of India compound the exploitation in their own unique ways.

Caste-based discrimination - something Tamil Nadu's parties including Jayalalithaa's have not only failed to stem but have, in fact, fuelled despite avowing the anti-caste ideologies of the great Dravidian stalwarts CN Annadurai and Periyar EV Ramaswamy - is rife in the factories as are sexual harassment and the use of child labour.

Children's ages are fiddled with in the books. Young Dalit girls the fact-finding team met in their village homes had been recruited when they were in their early to mid-teens.

"Management and line supervisors are frequently from urban middle-class background, and they generally belong to the same upper castes. Manual workers on the other hand usually belong to lower castes, the Dalit community or to indigenous groups (Scheduled Castes/Scheduled Tribes)," the report said.

"Dalits are at the very bottom of the system, and they typically perform tasks that sections of the population consider unclean and polluting. 'DDD' tasks (dirty, demeaning and dangerous) are usually assigned to members of the lowest or lower castes, ethnic minorities or workers from indigenous communities. For instance, those asked to clean the floor and the toilets are more likely to be Dalits or from the lowest castes."

Tamil Nadu's own peculiar racket for exploiting girls and young women has been the more than ten-year-old "Sumangali" scheme under which girls from oppressed castes are told they could work in factories for three years following which they would be given a lumpsum of Rs 30,000 (the sum had risen to Rs 50,000 in some parts by 2013). 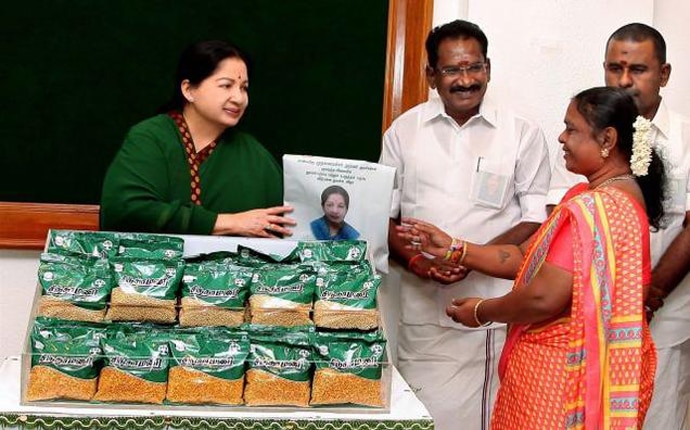 The fact-finding report noted: "The Sumangali scheme is primarily being practised in spinning mills, as more than 80 per cent of cases were identified in mills and 20 per cent in garment factories. Sumangali is also known as Thirumagal Thirumana Thittam, a Tamil (term) alluding to the state of happiness a woman is believed to have attained once she is married. Poor families struggle to get their daughters married and to come up with the dowry demanded by the grooms' families. Workers recruited under the Sumangali scheme are mostly young women, 80 per cent of them between 14 and 20 years old, and they are sometimes even younger. Most come from poor rural villages and vulnerable groups, and 60 per cent are Dalits. One study shows that 60 per cent of workers recruited under Sumangali are between 15 and 18 years old."

Although the "Sumangali" scheme is now officially illegal - following pressure from overseas buyers who are, in turn, subject to scrutiny by human rights and labour rights groups and NGOs - it is known to continue.

While it has been the subject of some amount of reporting in the media in the state, the rest of India and the world - barring a few foreign buyers adhering to norms dictated by their stakeholders - know little of it.

"Under the Sumangali scheme, workers are accommodated in hostels run by garment factories or spinning mills. Hostels are separated by gender, and staffed by guardians. In these hostels, workers - particularly young women - are subject to an extreme level of control. Factories and workers' hostels are usually surrounded by high walls, and workers are not allowed to leave the premises, to receive visitors or to have mobile phones. Psychological control and pressure have had tragic consequences in some cases.

Mission delegates were particularly alarmed at allegations of control over women's menstruation and maternity cycles. Indeed, some workers alleged that drugs were administrated via their food to prevent them from getting pregnant and menstruating, in order to maintain their productivity. Mission delegates could not obtain further information regarding this serious allegation, and further investigation would be needed to ascertain facts. The quality of the food and of facilities in garment factories and workers' hostels was systematically signalled as a matter of concern by the former Sumangali workers interviewed," the fact-finding report said.

There are some reasons why politicians in Chennai, including those of the late Jayalalithaa's party, ignore this practice in thousands of factories across the state: the companies are not only obliged to regularly contribute to the parties' coffers, many have also got Members of the Legislative Assembly and several ministers on their board.

The presence of labour inspectors on the ground is thin and they too are subjected to inducements or threats. Those factories that are subject to inspections by foreign buyers - a small fraction as most sell in the domestic market and few are into export manufacturing - can also fudge the books they show visitors.

Apart from exploitation of workers, "caste-based 'honour killings' of inter-caste (couples), especially involving Dalit boys and non-Dalit girls were at an all-time high during (Jayalalithaa's) watch," said Cynthia Stephen, a Bangalore-based independent researcher in an email to this writer.

"And the reason for this was that her support base was from the oppressor Gounder and Thevar castes, much of whose political power also devolved from wealth and influence got from running such oppressive sweatshops, and from illegal sand mining. And that Sasikala, her aide, belonged to the Thevar community who used this proximity to extract maximum advantage from the system."

Stephen also pointed out that many of the freebies given to women such as mixer-grinders and fans were of poor quality and have ended up as unwanted junk in many homes. Jayalalithaa could have done a great service to the girls and women of Tamil Nadu had she devoted an iota of her time in office to look into the exploitation they were being subjected to by thousands of factory owners, contractors, landlords and others.

Instead, her party AIADMK - made up mostly of oppressor caste members - and she herself, having been a Brahmin born from Bangalore, let them down massively.

It is highly unlikely that the inheritors of Jayalalithaa's mantle would care about human rights issues. It is imperative that civil society gets its act together and applies a modicum of pressure so as to proceed towards a pro-women, pro-labour and pro-children dispensation in Tamil Nadu and beyond.

Post your comment
#Tamil Nadu, #Sexism, #Women, #Jayalalithaa
The views and opinions expressed in this article are those of the authors and do not necessarily reflect the official policy or position of DailyO.in or the India Today Group. The writers are solely responsible for any claims arising out of the contents of this article.