Lynching is a practice in which a mob takes the law into its own hands. The practice has a long history, but the term "lynching" originated during the American Revolution with Col Charles Lynch and his group in Virginia, who formulated their own rules to confront criminal elements in a turbulent, lawless time.

India might be passing through a turbulent period in the context of social relations, but the state has enough means at its disposal to maintain law and order when and where it wishes to. However, in the last three years of the Narendra Modi regime, India has witnessed a number of horrific lynching incidents and they are becoming more and more regular.

The recent one has at least nine men being mercilessly beaten to death by rampaging mobs in Jharkhand in the last week, even in the presence of police forces. Among the victims, there was a group of Muslim cattle-traders.

Modi came to power in May 2014 and since then the Sangh Parivar has been enjoying state protection and patronage to pursue its ultra-nationalist Hindutva agenda, clearly mocking at India’s secular Constitution.

Mobs are being regularly mobilised to wage attack on places of worship of minorities, to protesting outside liberal academic campuses demanding closure, and even to harm Opposition leaders and activists by branding them as anti-Hindu and/or anti-national.

In the last three years, the ruling party and its cohorts have given priority to two of their pet socio-political programmes - Love Jihad (also called Romeo Jihad) and Cow Protection (Gau Raksha), which aim at mobilising mobs and dispensing instant "justice".

Vigilante groups in the name of protecting Hindu "sisters" from Muslim boys and protecting "mother" cows from Muslim traders have spread the reign of terror in many parts of India, particularly in BJP-ruled states.

The Sangh Parivar is carrying out an open campaign, alleging the existence of a grand plan by Islamist groups encouraging Muslim boys to seduce Hindu girls and marry them so as to convert them to Islam.

The Love Jihad campaign mobilises insecure Hindus who are suspicious of the Muslim community in general and also encourage them to dispense vigilante justice.

In the beginning of May 2017, an aged Muslim farmer, Ghulam Mohammad, was allegedly murdered by members of a vigilante group in Bulandshahr, Uttar Pradesh, on suspicion that he helped another Muslim man elope with a Hindu girl. This extremist militant Hindu vigilante group is Hindu Yuva Vahini and its founder is the Uttar Pradesh chief minister, Yogi Adityanath, himself.

The Hindu Yuva Vahini group was formed in 2002, but its attacks on Muslim men in relationships with Hindu women have become more common and brazen after Yogi Adityanath became the state's CM. 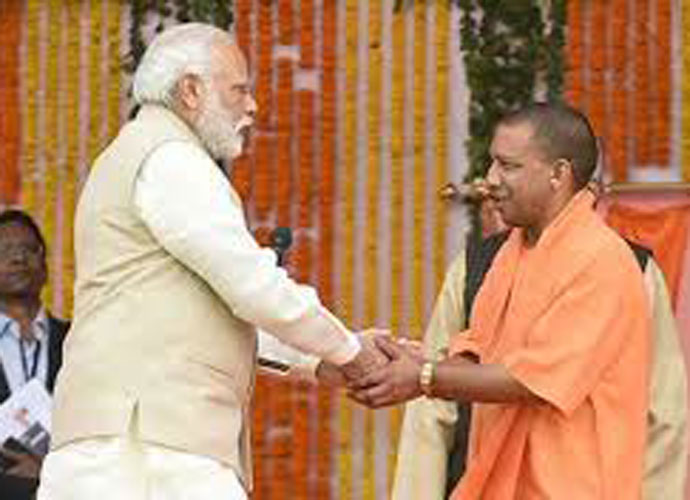 By appointing Adityanath, a vigilante leader, as CM of India’s largest state, Modi has sent the signal that his regime supports and promotes majoritarian vigilantism.

Not only in public places and parks, this group has taken its "anti-Romeo" vandalism to people’s homes as well.

By appointing Adityanath, a vigilante leader, as the CM of India’s largest state, Narendra Modi has also sent the signal to the country that his regime supports and promotes majoritarian vigilantism.

In many other BJP-ruled states, like Madhya Pradesh, Haryana and Rajasthan, there is explicit official support to vigilante groups against the so-called Love Jihad and "cow slaughter". Particularly, the gau rakshak groups are running amok in almost all parts of the country in the name of cow protection.

The victims of the marauding gau rakshaks comprising Hindu upper castes have been mostly Dalits and Muslims. Since the lynching of Mohammad Akhlaq in Dadri on the night of September 28, 2015, many incidents of savagery of such vigilante groups on Muslims and Dalits have taken place - in Daltonganj in Jharkhand, Unain in Gujarat, Mandsaur in Madhya Pradesh, Sonepat in Haryana, Reasi in Jammu and Kashmir, Chittorgarh and Alwar in Rajasthan and recently even in the nation’s capital itself, Delhi.

The regularity of lynching in different parts of India in recent years is not due to lawlessness in the country but because of the state-sanction behind it. The present regime’s political philosophy of "Hindutva" professes a pro-lynching ideology and promotes pro-lynching discourse.

Hindutva politics achieved its political success by primarily accusing the Congress for its so-called minority appeasement policies for decades. Though this alleged policy of minority appeasement is not based on fact and completely overlooks the terrible socio-economic deprivation of India’s Muslims, it has not stopped Hindutva goons from believing that Muslims have gotten away with too much of freedom and privileges before and that they need to be controlled now.

Mob rule plays a key part in the strategy of Hindutva politics of social control. Lynching by the mob is not to punish a crime, but to enforce inter-group control and to keep the idea and practice of upper-caste Hindu domination.

In this context, it does not matter whether the victim is guilty of wrongdoing or not - the lynching serves a larger political objective. It also helps the government to pursue its own narrow and divisive political objectives without being directly blamed for it.

That is the reason why the usually verbose Modi maintains strategic ambiguity when the country expects him to take a principled position on the barbaric acts of Hindu vigilante groups.

Last year, when he was forced to rebuke the gau rakshaks due to growing international criticism, he was not very categorical in his condemnation. The Sangh Parivar and some of their "social scientists" usually explain the trend within the rubric of justice and crime control, and blame dishonest policing and ineffective judiciary.

However, there is no doubt that the lynching mobs are motivated and mobilised by the hatred and prejudice propagated by Hindutva politics. Not only that, the Sangh Parivar also uses the vigilante groups and mobilised mobs towards achieving its own specific ends of enforcing social control, where upper caste Hindus will continue to have an upper hand.

Also read: It's a pity Modi doesn't see cow vigilantism and lynching of minorities as threat to Constitution