With lynch squads taking over, the brutalisation of Indian society is acute

French poet and modernist Charles Baudelaire once described the newspaper as a landscape of the city. As one traversed the columns and reached the suburb of supplements, one literally internalised the city’s grammar.

Today, as I read the newspaper, one often feels that desire and violence have become hallmarks of the city. The advertisements and supplements enact out desire, while violence spreads like an epidemic across the city. Gangrape, caste riot, communal atrocity or murder of a child — they have become a part of the new normalcy in the city. In fact, cities today are different repertoires of violence.

Even within the everydayness of such violence, the incidents near Jamshedpur were startling. As a wag put it, the violence startled us twice — once because of the way it was produced and once due to how it was narrated and consumed. The incidents capture some of the most primordial fears and stereotypes of our time.

When one watches violence today, it’s brutal, barbaric and yet seems strangely choreographed for consumption. Violence becomes a surreal ballet to be replayed perpetually.

The event could have been in any century — a crowd surrounding a scapegoat pleading his innocence. The ritual of the bleeding man begging for life is played out in full before the crowd beats him to death. 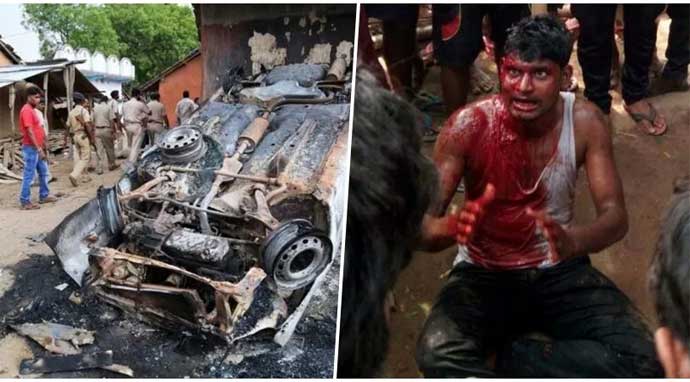 A charred vehicle that was torched during a violent protest and one of the victims of the lynching who was killed. (Photo: PTI)

The unforgiving nature of the crowd which has taken over the law and order frightens and disturbs. There is a split-level sequence in the before and aftermath of violence is clear. The first is the India of today as a Hobbesian world of cattle lifters and child lifters, where the life of innocent people is, to quote Hobbes, “nasty, shout and brutish”.

If the first emphasis is on the primordial Hobbesian state of nature where every man is enemy to every other man and the lynch squad is lynchpin and sovereign, the second is an Indian statist world where the state languorously consumes the violence. The lethargy of police stations and their complicity in the violence is almost taken for granted. The victims were Muslims in the first case, and in the second incident three people, all Hindus, who had gone to buy land, were lynched.

If one looks at it as a question of governance, the police as the state is a lazy witness. Secondly, the government as CM takes over and the relevant minister issues a statement that an enquiry has been ordered and that the responsible people would be punished.

It’s a stenciled, clichéd response forcing temporary closure. It is almost as if the lynch squad and the police station have a tacit division of labour, a synergy of violence.

In stage III, the news spreads and the media takes over. The first thing one notices is that there’s no humanity or outrage. Like pathological social scientists, we condemn violence only after it has passed the political correctness text. One has to find out who the victim was, his caste or religion, which party he was affiliated to. Only then does he begin to exist.

Ethics today seems to vary across caste and ethnic or religious affiliation. One refuses to mourn a human, one can only mourn a Hindu, Dalit or Muslim. Without a name or identity tag, the human in him is erased.

As one hears the bureaucrat and politician respond to the event, one senses a tired predictability. The announcement sounds as if some clerical thermostat has been activated and the right words are ejected from a machine. Then, the bureaucracy’s indifference is replaced by the politician’s hysteria. Each party acts as if there’s a scorecard in each office to find out which party was responsible for the deaths.

These events almost seem like fables mourning the death of humanity. Life is either primordial or casteist in the new regimes of today.

The act or omission that puts a final seal is the prime minister’s silence. When a NRI dies in the US, Indians want Trump to respond immediately. But when an innocent man is lynched, the responsibility for response is the Block Development Officer, the commissioner or an indifferent response from the CM.

I know as one reads the news on violence one often develops a critical of indifference. Yet, violence in India is deeply inventive as barbaric and the technical compete. Such fables of violence are early warning indicators that the body politic is ill and that a society that doesn’t reflect, react or even philosophise about violence and ethics is doomed.

As a citizen and as a social scientist, I think it’s time for the media and university to create an annual review of violence not as a passive archive but as a trigger for a new ethics, a new civics that can create mentalities to fight this group epidemic.

Violence cannot be a site for empty consternation and an emptier indifference as it is today.