Three armed policemen abducted, their assault rifles snatched and a rescue police party shooed away with stones seems like a scene from Jammu and Kashmir.

But this rebellion is simmering in Jharkhand where, though the scale of violence is much less, the idea driving the movement is as secessionist.

Three security personnel, deputed at the Khunti residence of BJP Lok Sabha MP Karia Munda, were abducted on Tuesday and been held hostage by a tribal mob since then. The mob also pushed back a police rescue party. Not J&K: Three security personnel were abducted by tribal protesters in Jharkhand

The tribal protesters on Tuesday forcefully entered into Karia Munda’s house to abduct the policemen, some 4km from Khunti district headquarters and 45km from Jharkhand’s capital city Ranchi.

It was exactly a week after five tribal social workers were gangraped in Khunti, a crime that police have linked to the secessionist tribal movement called Pathalgadi.

With over 100 villages declaring their sovereignty over State’s jurisdiction, Jharkhand — though born with Maoists extremism, has never come upon such crisis before.

It all started last year in July when a group of non-political tribal leaders revived an organisation called Adivasi Mahasabha and started fanning pro-secessionism sentiments among the tribal community. 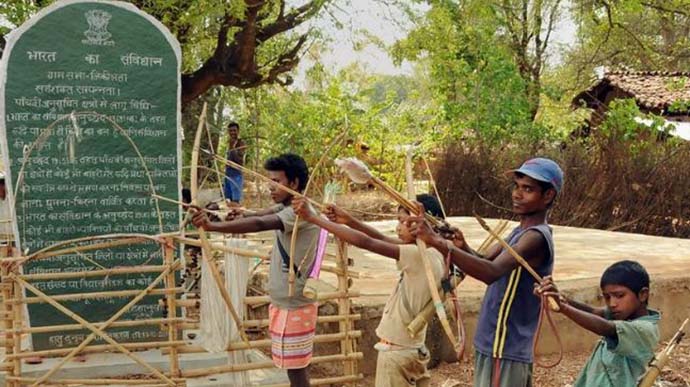 Pathalgardi groups have been active across four districts of Jharkhand for the past one year, but the government has ignored them so far

The self-styled tribal leaders tweaked Pathalgadi, an ancient tribal custom of installing monoliths next to the grave of ancestors, into a show of defiance against government’s jurisdiction.

Such stone slabs, filled with inflammatory messages, can be seen across rural Jharkhand.

As the Jharkhand government largely dillydallied or did precious little to reach out to the tribal community, which was impressionable and therefore susceptible to be swayed away; the situation has only deteriorated in Jharkhand. The worse consequence of ignoring Pathalgadi is visible now.

On June 19, five tribal women were abducted and gangraped for distributing anti-Pathalgadi pamphlets at the behest of local administration. The perpetrators told the victims that they were being punished for spreading words against Pathalgadi in the name of anti-human-trafficking campaigns.

The brutal gang rape, for the first time, has established close Maoists links with Pathalgadi movement promoters. The police have also released a picture of the perpetrator Baji Samad alias Takla, whose picture was taken by one of the troupe member in her mobile phone just before the assault begun. Samad is an area commander of the Maoist splinter group, People’s Liberation Front of India (PLFI), a group that holds sway across Khunti district.

Though ironical, the rape incident has given the BJP government a stick to beat its three bugbears, the Maoists, Pathalgadi protesters and also the church because of the apparent dubious role played by Father Aind. But, the Raghubar Das government just cannot wish away its responsibility.

“The government has to take the blame. They expected government officials, who neither know the local language nor have any emotional connect with tribal population to solve the issue,” a senior police officer told India Today.

Worse, the only serious political engagement that the government has initiated was in April this year when Governor Droupadi Murmu interacted with gram pradhans and other traditional tribal heads of Khunti district where trouble has been brewing for more than a year over Pathalgadi.

That governor’s initiative fizzled out is apparent. Stepping up their protest against government institutions, the Pathalgadi leaders have even set up what they called the Bank of Gram Sabha and issued passbooks to some 100 tribal villagers early this month, promising a parallel tribal economy in defiance to the state government.

The brutal rape, the subsequent abduction of three policemen, coupled with their apparent link with Maoists, are signs that can no longer be ignored.

Also read: India's emergency is in its state of denial