The Sangh Parivar's abhorrence for and denial of history makes a lot of sense. After all, the project of a "Hindu Rashtra" needs a clean slate. Any resemblance to Swachh Bharat Abhiyan here is not a coincidence.

There is only one little hitch. The fantasy of India as a clean slate to make it a playground for Hindutva fascism is threatened by the country's plural history and syncretism.

No matter how many Mughalsarais are renamed as Deen Dayal Upadhyay stations, Aurangzeb Roads changed to APJs, or Taj Mahals converted into Shiva temples called Tejo Mahalayas, there simply is no way to erase the remnants of the long journey India has undertaken before it turned into a republic.

If only they knew a nation is not a destination, but a perpetual contest between competing identities. Moreover, a nation is about its people, and people have a tendency to hold on to their past. It helps them in identifying and asserting themselves in a contested democracy.

The latest in that long saga of the Sangh anxiety is a portrait of Mohammad Ali Jinnah hung on one of the walls of the Aligarh Muslim University (AMU) students' union office.

After nearly 80 years of its innocuous presence inside the building, which also has portraits of Dr BR Ambedkar, Mahatma Gandhi among others, a BJP parliamentarian wants it removed and has suggested so in his letter to the AMU administration. A suggestion disguised more as a threat. A report today said chief minister Yogi Adityanath's mercenaries in Hindu Yuva Vahini have asked AMU to remove the picture within 48 hours, failing which they will do it themselves.

So, why does the Sangh hate Jinnah? 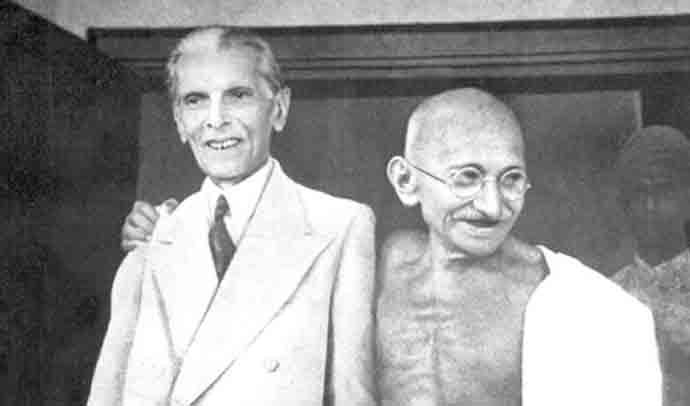 Like it happens with most cases of hatred, it's again born out of ignorance. That Jinnah was the founder of Pakistan, and hence responsible for India's Partition, is as reductionist as to suggest Mahatma Gandhi was behind India's independence from the colonial rule.

AMU as an institution is nearly 150 years old now. It started off as Mohammedan Anglo-Oriental College in 1875 and turned into a university in 1920, decades before India's independence.

The university is the product of a certain moment in history, when elites and educationists - which included not only Muslims, but also Hindus and "reformist" British - led by Sir Syed Ahmad Khan decided to impart modern education to the Muslim community, which was the worst victim of the brutal aftermath of the 1857 rebellion.

With the arrival of Gandhi and the launch of a formal freedom movement, as our NCERT books suggest, AMU, like all other universities in those days, responded to it. That it turned out to be a major platform for Muslims to rally around should surprise nobody. Jinnah, in that context, became popular on the Aligarh campus.

Yet, Jinnah was not the first person that the AMU students' union awarded its prestigious life membership to. That honour was given, rightly so, to Gandhi in the 1920s. In subsequent years, other national leaders, including Ambedkar, Maulana Abul Kalam Azad, Sir CV Raman, Jai Prakash Narayan and others were made life members of the students' union. Jinnah made the cut in 1938.

Like portraits of most leaders inside the union building, Jinnah also found a spot. That portrait has been hanging at the AMU students' union hall for decades, and yet, it did not turn AMU into another Pakistan. The university remains a premier central institution, funded by the government itself.

Did, for example, portraits of British colonialists-cum-orientalists, found in most top universities across India, turn them into Oxford or Cambridge?

A university like AMU is more than a university. It is also a historical artefact, a realisation of the Aligarh Movement in concrete, literally.

AMU, like most of India's artefacts, tells us about the long journey the idea of India has undertaken with all its complexities and contradictions. The past is not an annoying neighbour you decide to stay away from.

So, let's be clear here, and acknowledge this new aggression under the current regime to destabilise AMU, just like the regime has destabilised other premier institutions, including JNU, which was also declared anti-national by the same forces.

The idea is to paint Muslims as divisive, and having affiliations with and sympathies for Pakistan.

The Jinnah row also comes a week after the RSS said it will hold a shakha on the campus. The design is to polarise the country ahead of multiple elections in various states this year, and the crucial Lok Sabha election in 2019.

For a party and a government whose only priority is to win elections, there is no reason to believe that the Jinnah story will end here. The portrait in AMU will no more be frozen in time, as it has been so far. It will be retouched, and a fresh coat of stereotypes and suspicions about Indians Muslims will be put on it.

The same, old story of brute majoritarian politics will continue with a new hue.