'Junaid was lynched. But we'll live and die as Indians'

On June 22 two years ago, Junaid was lynched in a train, targeted in a fight over his skull cap. His family still lives in shock, fear and grief. But they are determined to get justice for Junaid.

Junaid was only 16 when he was lynched to death — all because he was wearing a skull cap.

Two days before Eid in 2017, Junaid, along with his brother Hasim and two other friends, had gone for Eid shopping to Delhi's Jama Masjid area.

All four of the boys had clicked selfies inside the Jama Masjid before boarding a local train back home to Ballabgarh. 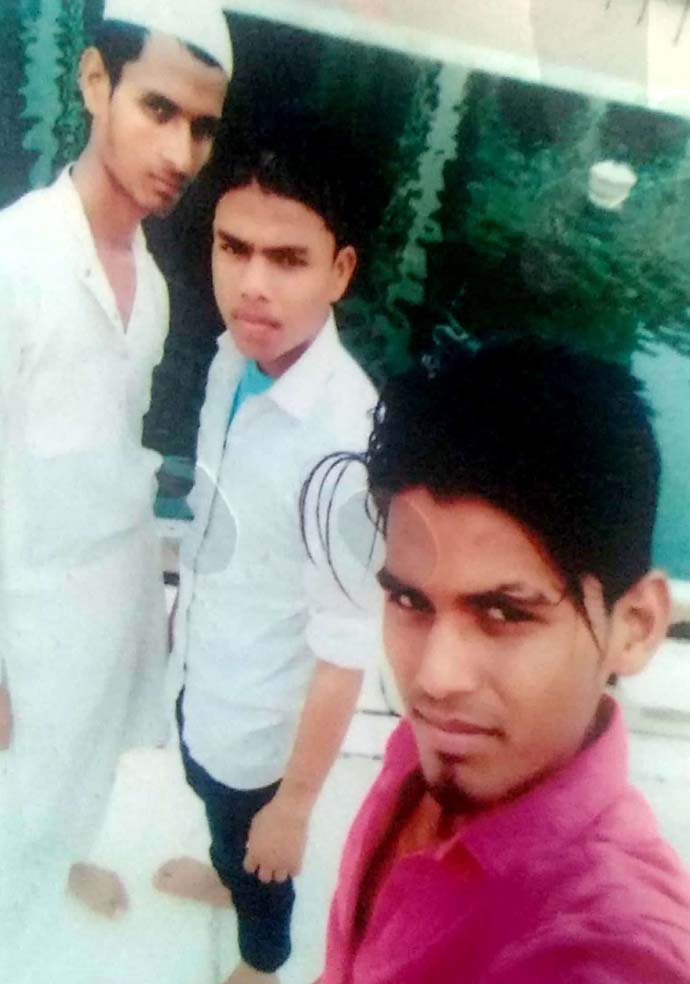 The last picture: Junaid (centre) in this selfie inside Delhi's Jama Masjid, hours before he was lynched. (Photo: Via author)

“The train was crowded but all of us managed to get seats. At Okhala station, around 20-25 youngsters came into the compartment and asked Junaid to give up his seat, which he happily did. One of them started abusing us, called us Pakistanis — they snatched and threw Junaid’s skull cap on the floor. Thereafter, at Faridabad station, five more guys entered the train who were part of their gang and abused us,” recalled Hasim when I met him this week.

As Ballabgarh station neared, the altercation grew to such an extent that the men reportedly stabbed Junaid numerous times, Hasim four times and Shakir, Junaid's elder brother (whom Hasim had called at the station) thrice.

Minutes later, Junaid died, in the arms of Hasim.

“My brother died as I held him. He took a long breath, as if his soul was leaving his body, and then, his eyes never opened again... before boarding that train, Junaid was telling me how he wants to be an Imam of a big Masjid one day,” recalled Hasim. Yes, Junaid was a religious person, so much so that he diligently read from the Quran five times a day. “All of us would read namaz at home, but Junaid would go to the Jama Masjid, next to our home at 5 AM, and he would return only at 9 PM, after he read the final prayers,” said Shakir. 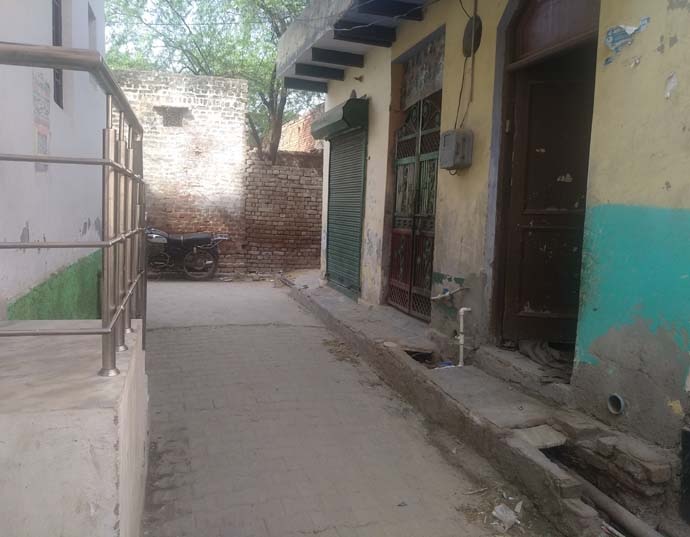 Khandawali, once home to Junaid: The village carries a strange, deserted look. (Photo: Via author)

Junaid spent most part of his life in a madarsa in Nuh. Khandawali, the village which was home to Junaid, carries a deserted look today. There is no signboard to tell travellers about this village. As we approached and asked for Khandawali, Junaid's village, a person having tea at a stall stared at us — 'Don't know about him,' he mumbled, 'But Khandawali is next to the mosque ahead.'

Inside the bylanes of Junaid's village, a concrete road has clearly never been laid, the path is full of bumps. As we asked another group of people about Junaid's house, we spotted Hasim, Junaid's elder brother, standing near a store. He greeted us and took us to their house. I asked him why locals looked blank when asked about Junaid, who had been a local boy himself.

He softly said, "No one wants to go to jail... they are perhaps afraid that like Junaid, if they speak, they too will die, like him." 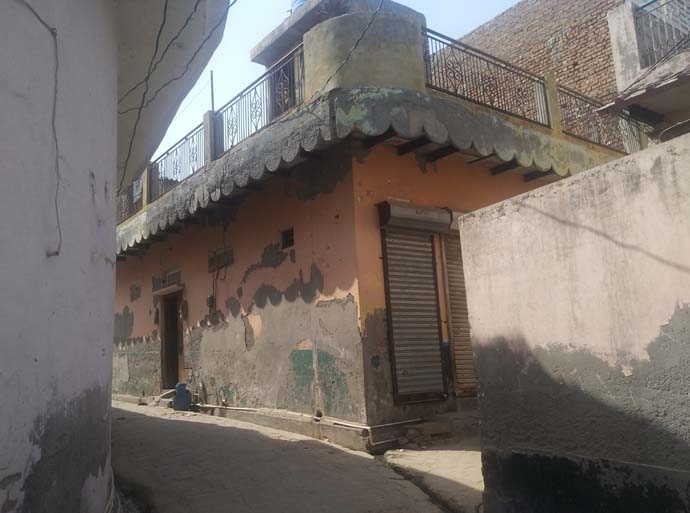 Once, home: The peach-coloured house where Junaid grew up. (Photo: Via author)

Junaid's house is situated on a steep slope. The peach-coloured house has paint coming off the walls. At the entrance are two shutters. I assumed they were shops. But Hasim said, "We are really struggling to buy food after Junaid's death, so I opened a grocery store, which didn't do well and we had to shut it. The other shutter is the passage which goes to the terrace of the house — everyone in our house including Junaid slept on the roof, as we can't afford coolers in all the rooms," he added as the heat beat down.

Inside the house, there are three charpais (beds) sitting close to each other, shelves on the walls are empty, the blue and brown-coloured paint is peeling off.

"I don't even remember the last time we got the house painted," said Hasim.

As I asked Hasim where Junaid spent most of his time in the house, he asked me to follow him. "Watch your head, the door is small, the passage quite tight, you might hurt yourself," cautioned his brother.

Behind a brown door was Junaid's own room. Inside his room, there was a black bag kept on the floor — it has all of Junaid's books.

There is one brown handbag, which he always carried with himself when he travelled to Nuh, along with one steel suitcase in which he kept all his belongings in the Nuh madarsa. It seems as if the room has not been cleaned since the last two years.

"You are right, we don't come into this room often as we still believe that Junaid lives here. We haven't disposed of anything which belonged to Junaid," said Hasim.

There are books which are safely stored in Junaid’s room, a notebook in which he had written 'Faizan Mukhtar'. Hasim looks at it now, “Faizan was his friend in Nuh’s madarsa. We don’t know much about him...,” says Qasim, his elder brother. His books, mostly the holy Quran and reference books on it, are kept in a black bag, while what he wrote is stored safely inside a box stationed on a shelf.

“When Junaid would get some time for himself, he would go through English dictionaries to learn new words,” adds Qasim. 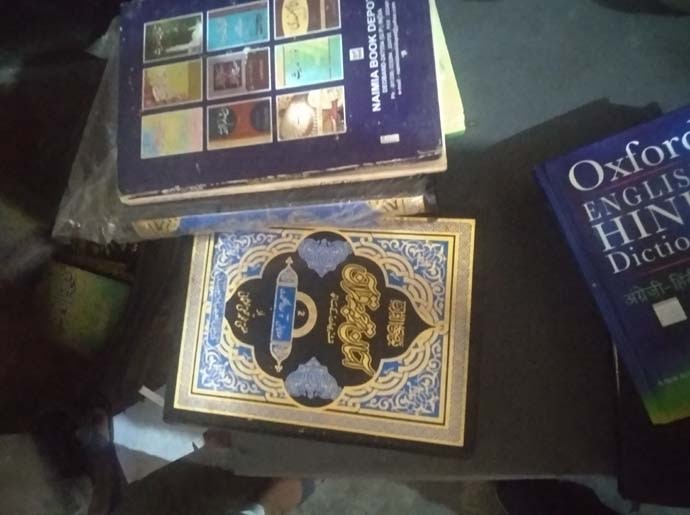 Junaid's books. His view to the world. (Photo: Via author)

The room still has his clothes hanging from a rope.

“He liked wearing pure white and that too, kurta and pajama. We are Muslims, all of us do take non-vegetarian food — but Junaid prefered vegetables. Yet, those people killed him, saying that he is a Muslim and eats cow meat,” said Hasim.

"We are true Muslims and don't indulge in all these acts — what our Hindu brothers don't like, we also don't have," said Qasim.

Still there: His family has not touched his room, his clothes and books are placed around as always. (Photo: Via author)

Junaid’s father Jalaludeen was a driver but after this traumatic incident, he left his job. “The fear of being killed surrounds all of us. We actually fear daylight more than night as Junaid was killed in broad daylight and no one came to help us out. I cried for help, people stood there in a circle — no one said anything. The accused fled from the spot without anyone even trying to nab them. Our family lives in constant fear of being lynched... The moment anyone goes out of the house, we call them after every 15 minutes to ensure they are safe,” said Hasim.

Today, he is the only earning member in his family, getting Rs 7,000 per month as an Imam.

The family had me sit in their drawing room, carefully shutting the windows and doors.

“We are psychologically terrified — none of us steps out of our house without two to three people escorting us,” said Shakir. The government has provided a police officer to guard the family 24x7. That afternoon though, the police officer had apparently taken a few hours break and gone to relax at a nearby police chowki.

The family lives a humble life. They have now cut themselves off from the outside world so much that they don’t even have a TV set.

“This was a decision taken by our abbu and we can’t say anything to him,” said Qasim.

There is no source of entertainment thus not only for Junaid's family, but for 90% of the Muslims who reside in Khandawali — no one has a television set. "Our elders say, TV will distract us and this is a decision which everyone living in the village respects," said Hasim.

A few houses away from Junaid's is the only grocery shop in the village. Naik Mohammad recalls how young Junaid would come to his shop, “He would often buy household products from me. Junaid was a quiet, humble boy who didn't have any friends. He remained within himself — but he loved playing volleyball.” 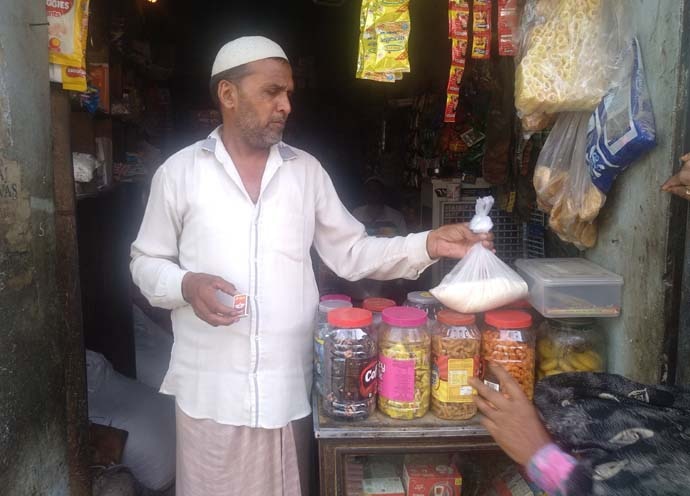 Junaid was the fourth amongst seven brothers. The youngest, Faisal, is studying in Class 10, while they have an elder sister who is married in Nuh and has five kids.

Hasim said that with the little money he had gathered, he bought a volleyball net and ball. The volleyball provided the family, well-rooted, but badly-off, some hours of togetherness and fun. The family kept to their own life and ways, until the day the world outside their village intersected with sharpness and took Junaid's life.

A neighbour, Rahimuddin, recalls the day when he saw Junaid’s dead body, “It was festive season for us, Eid was there — but for three days, no house in our village cooked any food.” Junaid’s brothers said it took one month for the local MLA to come and meet them — till now, hardly any politician comes and asks how they are.

Even after his death, reportedly all the six accused are free on bail today.

“There has been lots of pressure on us to take back the case. In fact, the other party had even told us through the village sarpanch that you withdraw this case and we will give you money, along with five plots and other goods. We outright refused this offer,” claims Hasim. The family says they only have enough money to survive each day, as they have sold off three plots just to fight this case — but that doesn't mean they will tire or not get justice.

“The next hearing in this case is on July 3 in the Supreme Court. We will fight till the end — until our Junaid gets justice,” adds Hasim. 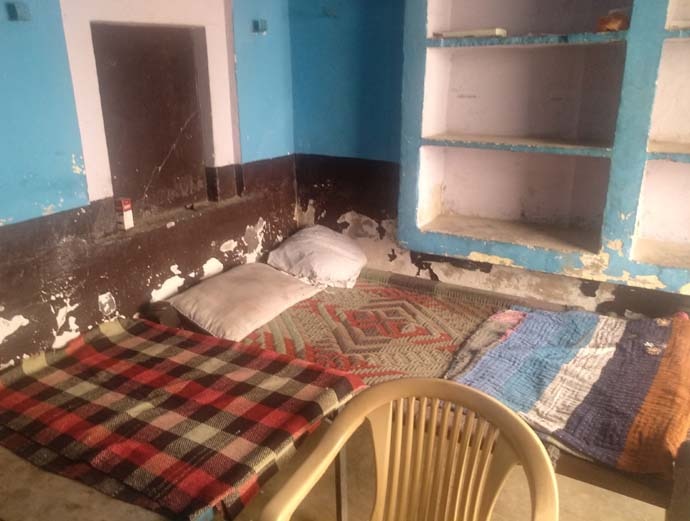 No comfort: Junaid's house is bare and desolate, with his family often locking themselves in to feel safe. (Photo: Via author)

The main accused in the case had apparently come near their village three months back. “He had stabbed himself and said that we had hit him. When police asked what happened, he said that he met with an accident and Junaid’s family has nothing to do with this,” claims Shakir. The brothers say they can’t stay quiet till all the accused who killed Junaid are put behind bars.

“We do feel that after the BJP came to power, lynching cases have gone up — the people who are committing such crimes seem to have got free backing from the government to do so,” adds Shakir.

Qasim said: "We thought that people would learn lessons and not commit such crimes after Junaid's death — but clearly, after what happened in Jharkhand, they are not stopping."

Junaid’s parents were not in the house that day as they went to Faridabad to complete their formalities for Haj which they plan to undertake this July. “Junaid always told us that he would have enough money one day to send our parents for Haj. Now, he is not here, but with the help of some people who supported us after Junaid’s death, our parents are going on the Haj,” said Hasim. The brothers want to open a school in Junaid's name. They now say, "We don't know our future honestly, but let this case get settled, then we'll decide what to do with ourselves."

"We are Muslims," adds Shakir as the sun prepares to set and I rise to leave. "We were born in India though and we'll die as Indian Muslims — not Pakistanis."