If Modi were a bit like Justin Trudeau, everybody would be a bhakt

The Canadian PM will tender Sikhs an apology for the 102-year-old Komagata Maru blunder. Will Modi ever for 2002?

When Justin Trudeau joked last month that he had more Sikhs in his cabinet than does India's Narendra Modi, his comment should have spurred a bout of introspection among many. But it didn't. Instead, it was taken as just another smart quip from the handsome prime minister of Canada, the latest poster boy of liberal humanism - a shrinking political space by all means.

Now, with Trudeau pledging to tender a heartfelt, official apology, right in the House of Commons of the Canadian parliament, for the Komagata Maru tragedy of 1914, he appears almost otherworldly in his ideological niceness. It was in January 1914, few months before the First World War sunk the twentieth century into a morass of bloodshed and nationalistic animus, that a Japanese ship - Komagata Maru - sailed from Hong Kong, stopping over at Yokahama, Japan, en route to Vancouver, British Columbia, Canada. However, the steamship, which was carrying 376 passengers from British India, mostly Sikhs, but also some Hindus and Muslims, was forced to return with all but 24 of them.

The Komagata Maru incident became one of the first instances of racist governmental exclusion of brown-skinned Indians and Asians, which a hundred years later is almost an established norm among the rank and file of Euro-American politicians.

Keeping the dirty immigrants out, whether they are of Syrian crisis origin, or of the devastation that is West Asia and North Africa, is a clarion call not only in an election-bound America, but also in a "refugee-badgered" Europe. But the person who's making the most of it is undoubtedly the Republican frontrunner Donald Trump, whose "Wall of Mexico" is a vision from hell and a metaphor of what may lie ahead if the USA bets on this real estate mogul.

Though Trump is derided and ridiculed for his lack of political sophistication, it seems the thaw among the Indian commentariat  has already begun, with some seeing in the Republican presidential hopeful a sign of an inherently capitalist America wresting free of Barack Obama's "socialism".  A parallel with Narendra Modi battling to "purge India of the Nehruvian hangover" just cannot be missed, just like it is often uttered with relish among diplomatic circles that Indo-US relationship fared better under Obama's predecessor and Iraq War architect George W Bush. 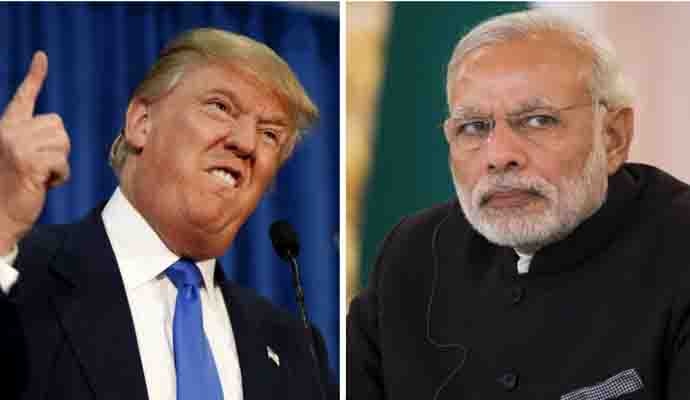 Trump himself has proclaimed his "like" for Modi (as well as President Vladimir Putin of Russia), and we can easily deduce he has premised his imagined fondness for the Indian prime minister on a shared character trait: of unleashing relentless aggression on the political opposition and making a virtue of ad hominem attacks.

But more than economic heft that India may throw around for Trump to notice and acknowledge, it's his acute and publicly honed Islamophobia that rings a bell with the ruling regime in the centre here. In fact, the Boston Globe imagines almost a pre-Holocaust like scenario in this mock front page dated year 2017 lest it's President Trump in the White House. 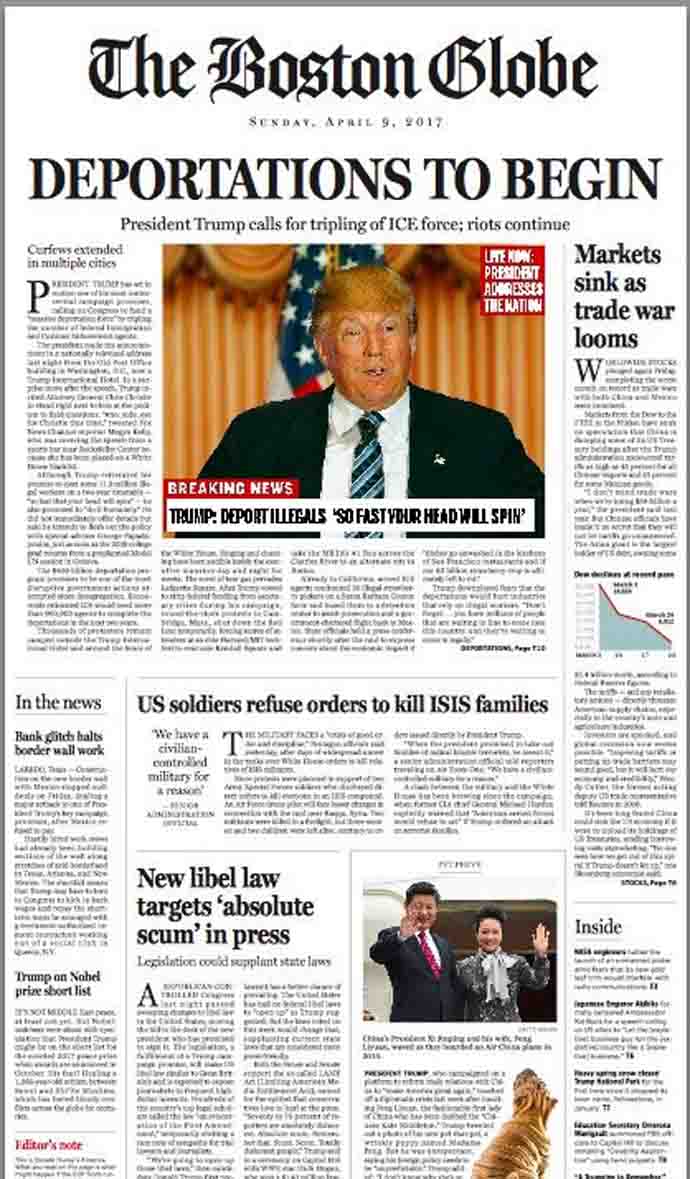 A page one lest it's President Trump, as imagined by the Boston Globe.

Though not as pungent as Trump's "deport all Muslims", Modi's "kutte ke bachche" remark on Gujarat 2002 victims had stunned everyone with a modicum of humanity inside. Forget apology, for Narendra Modi, Godhra 2002 is a reservoir of political capital that will be harked back to every time there is an election around the corner.

In fact, what we are seeing in India today is a micro-managed climate of permanent electioneering, with open Islamophobia and Hindutva's daily cultural encroachment becoming mainstream like never before. The similarity between Trump's election campaign predicated on white supremacist rage and that of Modi's "governance", riding an ever-growing wave of Hindu cultural nationalism, is just too humungous to miss.

In this context, Justin Trudeau's liberal niceness, his sanguine readiness to say sorry to a community for a century-old institutional wrongdoing, is a contrast just too sharp to savour. Trudeau's formal apology, which he will tender on May 18 this year, will put the official stamp on his Sikhophilia, which no amount of telegenic bhangra on Baisakhi would have been able to convey.

It is obvious that Justin Trudeau matches his liberal optics with liberal policies on the ground. In November last year, when he took oath as the prime minister of Canada, his cabinet became the top headline the world over for its unprecedented and stubborn diversity. With 15 of the 30 ministers being women, four Sikhs, some of indigenous Inuit origin, even a differently-abled person on board taking charge of the carefully conceived, "interdisciplinary" ministries, including one of climate change, Trudeau's cabinet is a liberal humanist wet dream of realised, respectful, self-confident diversity.

Compare this with Modi's cabinet and you sigh with disappointment. While Trudeau's ministers are all absolute experts in the areas they manage, thereby doing superb justice to the portfolios they hold, Modi's mismatched choice includes Smriti Irani as HRD minister, or a Rajnath Singh, who relies on a fake Twitter account to cull out top intel on national security, as the Union home minister.

Justin Trudeau, on the other hand, has an ingrained respect for diversity, a part and parcel of the multi-ethnic, multi-cultural Canada, and something India has long known as its integral secularism. For Trudeau to apologise for the Komagata Maru incident, which resulted in those deported dying in clashes with British soldiers or being sentenced to prison, is not so much a sign of any political magnanimity than it is the belief in reparative justice and the desire for a world order based on equal respect and opportunity for all.

When inclusiveness is politics and justice a matter of policy, the telegenic dramatics looks like an extension of a person's charming spontaneity - as is the case with Justin Trudeau. On the bitter other end, with Modi, everything looks staged and made for effect - even those made keeping India's secular fabric in mind, such as his presence at the World Sufi Festival.

True, Canada toiled for over a decade under its former prime minister, Stephen Harper, whose policies closely resembled many of Modi's own. Justin Trudeau for Canada is the very manna from heaven. Does that mean India too has to suffer its eight and half years of more political roguery?

Or, will Trudeau beat Trump to influence the inner "statesman" in Modi?

#Komagata Maru, #Donald Trump, #Narendra Modi, #Justin Trudeau
The views and opinions expressed in this article are those of the authors and do not necessarily reflect the official policy or position of DailyO.in or the India Today Group. The writers are solely responsible for any claims arising out of the contents of this article.