Priyanka Gandhi's plans and pitfalls: There are many moves towards power, and possible falls on the way, for the Gandhi scion

Priyanka Gandhi Vadra is on a fire-fighting mission on many fronts.

In the wake of Robert Vadra’s alleged involvement in cases of corruption, the young Gandhi has decided to take an aggressive posture — she will take the bull by the horns. She was seen dropping Robert off at Jamnagar House. The nuanced position Priyanka wishes to take is that she is not someone condoning corruption in high places, but at the same time, she wishes to focus on the ruling establishment’s apparent bid to settle political scores through central agencies like the Enforcement Directorate and the CBI.

Her remark, "Duniya jaanti hai, kya ho raha hai" is a pointer in that direction.

Some legal eagles view Vadra's alleged acts more in the context of a misuse of propriety than a blatant violation of law. If that holds true in a court of law, Priyanka Gandhi Vadra has a window of opportunity in making political capital out of this crisis. 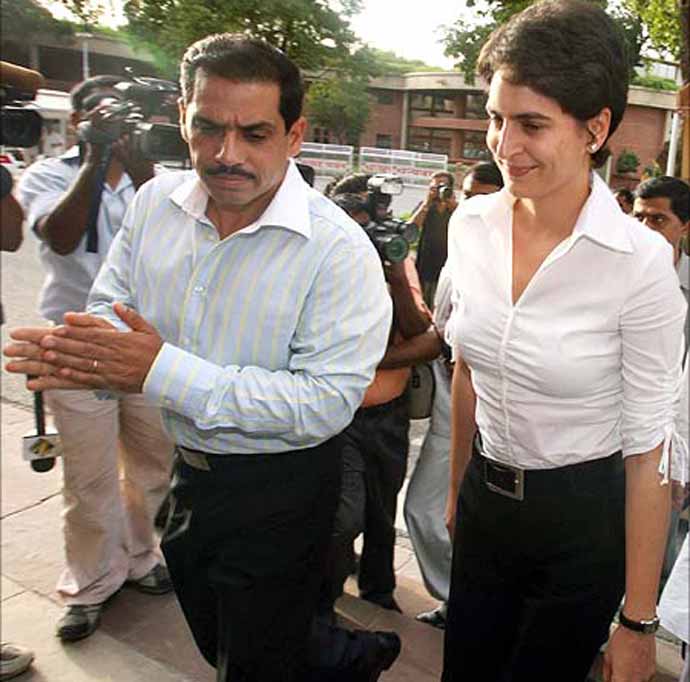 It's all about loving your family: In defending her husband, Priyanka needs to ensure she doesn't come across as supporting corruption. (Source: Twitter)

On the political front, Priyanka has too much on her platter. Mission eastern Uttar Pradesh is near-impossible given the task of reaching out to the masses on caste, sub-caste, social and economic markers, gender, jobs, religion and numerous other grounds.

Simultaneously, she has to take on Prime Minister Narendra Modi and Uttar Pradesh Chief Minister Yogi Adityanath on their own turf. The All India Congress Committee (AICC) general secretary is expected to be a social media warrior, proactive on Twitter and use 24X7 television news to her advantage to take on the combined might of the highly skilled and resourceful BJP — all at the same time.

As if these seemingly insurmountable tasks were not enough, Priyanka’s job needs to be bit understated, so that it does not overshadow the office of the Congress president Rahul Gandhi. This is one area where spin doctors, professionals and party leaders have little scope to advise or strategise. A sibling bond is one such relationship where there is little scope for any third person (except perhaps for mother Sonia Gandhi) to intervene or guide.

Predictably, her first few days have lacked the grand opening that was expected from ‘Brand Priyanka’.

Instead of adopting a policy of “shock and awe”, the country saw Priyanka occupying a room next to Rahul Gandhi at 24, Akbar Road. She was also seen rushing in and out at 12, Tughlak Crescent, the residence of the Congress president where party bigwigs held lengthy deliberations.

The grand old party seems obsessed with its Delhi-centric activities and perceived hierarchy within the Congress. Except for a short video that was ‘exclusively’ released to media showing Priyanka spending time with jhuggi dwellers, the ‘positive optics’ have been largely missing.

The Congress needs to understand again and again that the task before Priyanka is not about winning hearts and minds of Congress workers but the public at large.

She has to apply her charisma, spontaneity and acumen on voters, particularly those who do not think much of the Congress. Her success would depend on how she manages to draw the great Indian middle class, first-time voters, women, weaker sections and the upper caste (some of these target groups overlap) towards the party.

That is where the Uttar Pradesh story is crucial.

The grand old party, in its wisdom, is making no mention of Jyotiraditya Scindia, who has been given a Priyanka-like role in western Uttar Pradesh.

As a Lok Sabha member from Madhya Pradesh’s Guna Parliamentary seat, there are many searching questions here that beg answers — will Scindia be contesting the 2019 Lok Sabha from Guna? If so, how is he expected to devote time nursing and campaigning and reviving the Congress in highly volatile western Uttar Pradesh? While Priyanka tackles eastern UP, Jyotiraditya Scindia will handle western UP. But where will MP's MP Scindia contest from? (Source: India Today)

If Scindia is not contesting from Madhya Pradesh, we have a big story unfolding that has tremendous bearing on the politics of the Hindi heartland.

Can the former maharaja of Gwalior be the Sheila Dikshit of Delhi in Uttar Pradesh? In 1998, Dikshit was a politician from Uttar Pradesh (having lost four consecutive Lok Sabha polls) when Sonia Gandhi gave her charge of the Delhi Congress — Dikshit was a runaway success, leading Delhi from the front in three successive Assembly polls.

Will Scindia be the face of the Congress in Uttar Pradesh for the 2022 Assembly polls?

The question may look slightly outlandish at this point of time. But there is a general consensus, even within the Congress, that the revival of the Congress in the country’s most populous and politically significant state can happen under a charismatic, performing leader. Since the Gandhis have been reluctant to dabble in state politics (Digvijaya Singh tried to encourage Rahul Gandhi in 2011), the chances of Priyanka Gandhi confining herself to Uttar Pradesh are remote. At the Fore: Priyanka Gandhi is likely to play a larger role in the Congress party on the national level. (Source: India Today)

The likes of RPN Singh, Jitin Prasada, Pramod Tiwari, PL Punia, Salman Khurshid, Sri Prakash Jaiswal and others just do not have in them any organisational or leadership capability to lead in Uttar Pradesh.

Scindia offers an element of promise and expectation.

Away from the public glare, Priyanka is known to have influenced an otherwise adamant Sachin Pilot to be Ashok Gehlot’s deputy in Rajasthan after the party won the state assembly elections there.

This was also the time when Scindia was seeking a role in Madhya Pradesh — is destination Uttar Pradesh a stiff challenge given to Scindia?

You heard this here first.

Post your comment
#Rahul Gandhi, #2019 general elections, #Priyanka Gandhi, #Jyotiraditya Scindia
The views and opinions expressed in this article are those of the authors and do not necessarily reflect the official policy or position of DailyO.in or the India Today Group. The writers are solely responsible for any claims arising out of the contents of this article.