After the Kairana by-polls: The real game between BJP and the Opposition starts now

A complacent BJP has suffered a major blow. But the successful 'grand Opposition' can't get over-confident either.

The results for the last by-polls before the 2019 Lok Sabha elections are in and may cause major heartburn to the ruling BJP. The opposition parties have won 11 out of the 14 seats where elections were held on May 28, while the BJP could only win two and an NDA ally, NDDP one. Of the four Lok Sabha seats, three were previously held by the BJP, while the fourth was held by its ally in Nagaland. The BJP lost two out of the four — including the crucial Kairana seat, results for which were being keenly watched in the wake of the Opposition "grand alliance" or the coming together of the SP, BSP, RLD and the Congress, precisely to take on the ruling party.

The by-poll for Kairana was necessitated following the death of the BJP's Hukum Singh who won the seat with more than 50 per cent votes in 2014 in the face of polarisation following the 2013 Muzaffarnagar riots. Kairana, situated in the heart of Jat-land, has more than 35 per cent Muslim votes, but Hukum Singh won this seat easily, riding on the back of consolidated Hindu votes. Apart from Jats, who had traditionally been voting for Ajit Singh's RLD, OBCs — and even Dalits — voted overwhelmingly for the BJP in 2014.

The picture has now changed.

The Opposition strategy to field Tabassum Hasan, wife of the late Munawar Rana, a Muslim candidate from the RLD, worked — she defeated BJP's Mriganka Singh, daughter of the late Hukum Singh, by a handsome margin of 44,618 votes.

Interestingly, four out of five assembly seats in Kairana Lok Sabha constituency — Nakur, Thana Bhawan, Shamli, Gangoh — were earlier won by the BJP in the 2017 assembly polls, while the fifth, Kairana, was won by the SP.

The Kairana by-poll win now is a hat trick by the grand alliance, where opposition parties initially came together to take on the BJP in the crucial Lok Sabha seats of Phulpur and Gorakhpur earlier in the year. In a major embarrassment for the BJP, the party lost both the seats to the SP, which had the support of the other opposition parties. A win in Gorakhpur, previously held by UP CM Yogi Adityanath, and Phulpur, vacated by UP deputy CM Keshav Prasad Maurya, came months after a landslide BJP win in the 2017 UP Assembly elections, where the BJP won 312 of the state's 403 seats; its allies had won 13 seats for a grand total of 325.

The major reason cited for this massive BJP win was the fragmented opposition.

Something that the parties realised and made course corrections — the results of which were evident in the Gorakhpur and Phulpur by-polls.

The Karnataka assembly elections results throwing out no clear winner also proved to be a boon for the opposition. It necessitated the coming together of the Congress and JD(S) in a post-poll alliance to keep the BJP out of power in the southern bastion. The grand show of opposition unity at HD Kumaraswamy's swearing-in ceremony was a clear indication of their future course of action. 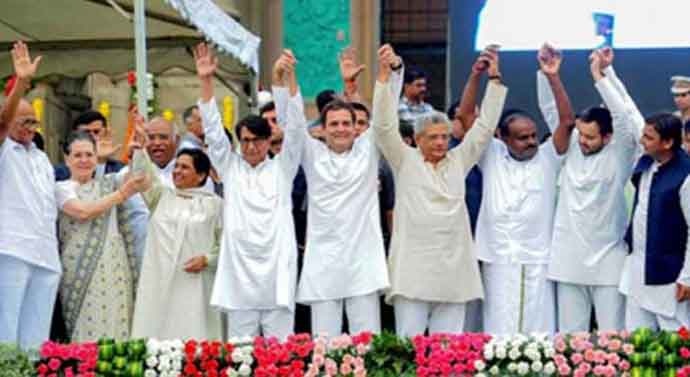 Warning signals for the BJP

The BJP won the 2014 Lok Sabha elections riding on the Modi wave and secured a handsome tally of 73 (71+2 allies) seats in Uttar Pradesh. The party got votes not only from its traditional voters, but was also able to wean away OBC votes from the SP and Dalit votes from the BSP. Mayawati could not even win a single seat in the 543-member house.

This combination formed the backbone of the saffron party forming the government at the centre.

With bitter rivals SP and BSP agreeing to bury the hatchet now and pooling in their political resources along with Congress and RLD in the state, the BJP is alarmed. The coming together of Dalits — making almost 21 percent of the voters in UP, along with Muslims at 19 per cent and SP's 7 per cent Yadav voter base (OBCs make 40 per cent of the state's population) — could pose a formidable challenge to the BJP.

While the BJP tried its best to rally the majority votes in its favour, it found no takers for its "Hindu exodus" and "Jinnah portrait" controversies. The 'Hindu exodus' theory, first floated by the late Hukum Singh in Kairana, and later found to be false, was repeatedly raised by UP CM Yogi Adityanath in several of his election speeches. Even the Jinnah portrait controversy in AMU found no takers. The voters, already reeling under the impact of not finding enough labour for their fields in the aftermath of the Muzaffarnagar riots, which forced a large number of Muslims to migrate to relief camps, were more interested in getting their dues from sugarcane mills.

With Kairana being a sugar belt and the farming community comprising a large section of the voter base, the sugarcane dues issue was raised quite effectively by RLD's Jayant Choudhary. The ruling party did try to make amends by releasing some dues to the sugar mills — but this was too little, too late.

Having used tall promises in its 2014 poll pitch of bringing back black money from abroad, the BJP now faces the uphill task of delivering on them and is not find many takers for excuses that pin all the blame on erstwhile governments. With the country still reeling under the impact of demonetisation, the BJP will have to answer on issues such as rising fuel prices, rampant unemployment, crimes against minorities and Dalits. The one-way communication style of the Modi government will not cut much ice with voters.

The PM will have do more than make promises. He will have to deliver on them.

The opposition unity is also likely to play spoiler for the BJP's prospects in the upcoming assembly elections in Rajasthan, Chhattisgarh and Madhya Pradesh due later this year. BSP, having almost 4 per cent vote share in these states, along with the opposition vote share, can seriously impact the outcome of the results.

Already on the backfoot and facing anti-incumbency in all the three states, the BJP has its work cut out. Having realised the seriousness of the situation, the BJP as well as the RSS' top brass have instructed the party leaders to ensure a more concerted Dalit outreach.

The saffron party is facing not only a united opposition but several of its disgruntled allies. While the opposition unity has already ensured the BJP's defeat in four consecutive by-polls — Gorakhpur, Phulpur, Kairana and Bhandara Gondia, for the Lok Sabha — the party has also not fared that well in assembly by-polls.

In Maheshtala, Mamata Banerjee's Trinamool Congress defeated the BJP by a wide margin of over 62,000 votes, the Akhilesh Yadav-led SP won Noorpur in UP by 6211 votes, Tejashwi Yadav's Rashtriya Janata Dal's won in Jokihat, Bihar, by a wide margin of more than 40,000 votes, defeating Nitish Kumar's JD(U), the Jharkhand Janmukti Morcha (JMM) won two assembly by-polls in Silli and Gomia, the Left won in Kerala's Chengannur, Rahul Gandhi's Congress won the Shahkot assembly by-poll in Punjab, Ampati in Meghalaya and Rajarajeshwari Nagar in Bengaluru, polling 41,162 votes more than the runner-up.

If the by-poll results are seen as a sign of things to come, the ruling party and its allies are fast losing ground in the face of the united opposition. Arithmetic seems to have triumphed over chemistry — the numbers that looked good on paper are actually working in the opposition's favour on the ground.

A win in Palghar did give some respite to the ruling BJP, which was increasingly coming under attack from its oldest ally, the Shiv Sena, that had decided to field a candidate against the BJP for the first time. But the win was especially due to the North Indian voters who voted overwhelmingly for the BJP. But however the close fight, where the party scraped through with 28,000 votes, is certainly a wake-up call for the BJP.

Challenges before the Opposition

One also has to bear in mind that the voting patterns do change from Assembly to Lok Sabha elections and while the by-poll results come as a dampener for the BJP, they would take heart from the fact that the opposition has no single pan-India leader to take on PM Modi in 2019. If we look at the numbers of the 2017 UP assembly elections, the combined vote share of the BSP, SP, Congress and RLD were more than that of the BJP. But, in the 2014 Lok Sabha elections, even this combined vote share was less than the BJP's vote share.

While Congress would like its president Rahul Gandhi to be the PM candidate for the opposition, there are several other hopefuls. Is the answer for Rahul blowing in the wind?

BSP's Mayawati, who does not have a single MP in the 545-member Lok Sabha, considers herself a serious contender for the PM'S post in 2019. SP's Mulayam Singh Yadav, a former defence minister, would also not be averse to the position, something that his son SP chief Akhilesh Yadav has already put on record. 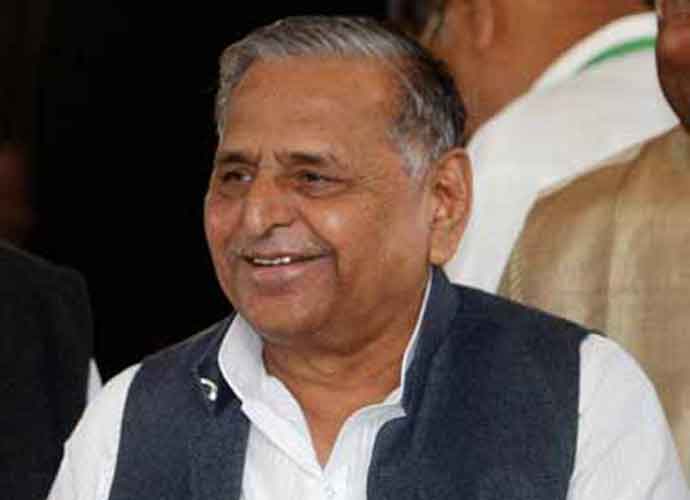 Could Netajji be India's next Pradhan Sevak?

Mamata Banerjee, seen as holding her own in West Bengal against the onslaught of the BJP, also nurses PM ambitions. Even before the Karnataka elections, she had already floated the idea of a fourth front. Sharad Pawar, NCP President, known for his across-party lines connections, is hoping that if consensus among the opposition parties fails, he could offer himself as a compromise candidate.

A serious challenge for the opposition is thus the lack of a pan-India leader for 2019.

The only available candidate, Rahul Gandhi, may not be an obvious choice for all the partners.

While a fear of Modi's BJP has united the opposition parties, the real test will come only if they are able to cobble together sufficient numbers in 2019 to form the government at the centre.

While the BJP would use the Kairana by-poll loss to consolidate its voters, the opposition risks getting carried away over their victory. The only way forward for the opposition is to not rest on its laurels and plan ahead by smartly allocating seats depending on the partys' ground strength and cadre base. The Congress too would have to accept the fact that without regional partners, it will not be able to take on the Modi-Amit Shah election machinery. The recent wrangling in Karnataka with the JD(S) over portfolios is an ominous sign.

How effectively this opposition takes on Modi, only time will tell. But the BJP as well as the grand alliance have their task cut out for them.

Any complacence — or overconfidence — on their part will cost them dearly now.

Post your comment
#Narendra Modi, #Lok Sabha elections 2019, #Uttar Pradesh, #Kairana by-poll
The views and opinions expressed in this article are those of the authors and do not necessarily reflect the official policy or position of DailyO.in or the India Today Group. The writers are solely responsible for any claims arising out of the contents of this article.