Why we must watch Tamil documentary Kakkoos, a brutal exposé of manual scavenging

Indian cinema is spinning through terrible turbulence. Its road has been rocky for quite a while now. Films are being told to literally butcher their content – as we have seen in the case of Udta Punjab or Lipstick Under My Burkha or, now, Babumoshai Bandookbaaz (the filmmakers have been ordered by the Central Board of Film Certification/CBFC to execute 48 cuts!).

If movies escape largely unscathed, they face another kind of censorial hostility, which arrives in the form of mob protests and violence. Years ago, we saw how Toronto-based Deepa Mehta and her cast of Nandita Das and Shabana Azmi – both tonsured and ready to play widows in Water – were chased out of their Varanasi location by radical political groups. Tamil actor-director, Kamal Hassan, too has faced such ire with some of his films. Ace Sri Lankan auteur Prassana Vithanage could not release his With You Without You (a poignant look at the relationship between a Sri Lankan man and a Tamil woman), because Tamils felt (without any basis whatsoever) that it was pro-Sinhala and anti-Tamil.

The latest to suffer is the young, full-of-stars-in-her-eyes debutant documentary filmmaker, Divya Bharathi, whose longish Kakkoos (Toilet), is a brutal expose of manual scavenging in Tamil Nadu. Despite the state government's contention that sanitary workers no longer use their bare hands and feet and that the whole operation is now fully mechanised, Bharathi's work, running close to two hours, documents men using their hands to clean human waste.

Something that has been banned by law and something that Gandhiji many, many decades ago called inhuman and something that goes against the grain of Swachh Bharat, manual scavenging takes us back to those dark days when men and women carried faeces on their head! The picture is almost as ugly today.

And this is what Bharathi's movie talks about with a whole lot of interviews with sanitary workers – who belong to Scheduled Castes (SCs) and Scheduled Tribes (STs). Her camera actually captures this horrifying spectacle of people using their hands (no gloves, no boots) to clean human excrement. 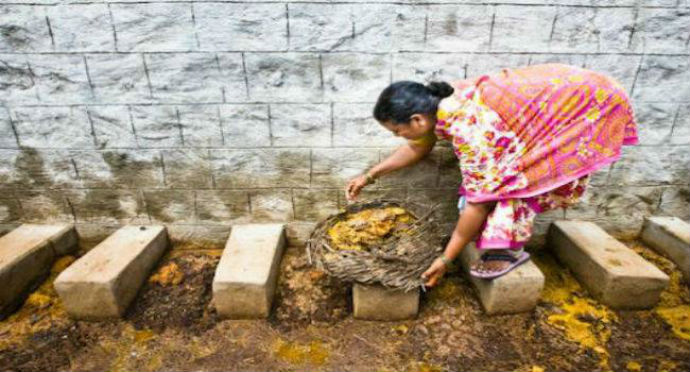 Freely available on YouTube, Kakkoos is a searing look at an India where a group of people is bonded to a shameful existence. Imagine a life where one has to clean another man's faeces! And this 70 years after our independence – where we pride ourselves as a modern nation, as a scientifically progressive society, and as a great civilisation.

Obviously, Bharathi finds herself hated, only because she has had the guts to photograph a bitter truth, and show it to the world. She has been abused on Facebook, has been getting threatening calls, and all from – as she told me this morning over the telephone from the temple town of Madurai (where she lives) – “high caste groups and some right-wing elements”.

They argue that manual scavenging does not happen in Tamil Nadu, and that Bharathi has been incorrectly portraying a particular community reportedly involved in this demeaning profession.

Bharathi denies this; she says that during the course of her making the documentary – from October 2015 to December 2016 – 27 men died due to manual scavenging.

Obviously, this is too large a number for any government to brush aside, and an understandably nervous Bharathi has now sought police protection. Lipstick Under My Burkha was deemed 'lady-oriented' by CBFC.

As much as Bharathi's efforts and pluck need to be lauded, it is high time that the voice of the people is allowed to be aired. "Otherwise, the meaning of democracy turns meaningless," Bharathi avers. This is also what Indu Sarkar quips in the recent film of the same name – which talks about the 1975 Emergency.

And beyond all this are India's alarming steps to suffocate cinema of substance. Everybody knows that Punjab has a huge drug problem – which is all the more scary, because it is a state bordering Pakistan. Yet, when Udta Punjab fictionalised this, the CBFC tried to throttle the movie.

Everybody knows that the widows of Varanasi live pathetic lives of distressing deprivation. But when Mehta wanted to narrate this through a work of fiction, extremists went on a rampage, crying hoarse that she was making a film which was against India's culture and ethos!

Now, Bharathi is up against groups whose ways may not exactly be civil. At least one can argue or reason with the CBFC, but how does one tackle physical threats – which can easily translate into actual harm? “Can we call ourselves a civilised nation,” she asks me. This is what Mehta asked me long ago after she was forced to move to Sri Lanka to shoot her movie. Sadly, two great artists like Das and Azmi could not be part of Water.

I think somewhere down the line, we - as a nation - have lost our civility. We have turned into men and women who cannot face truth. Manual scavenging is one such undeniable truth.

Kakkoos must be shown and seen.