Kamal Haasan, a big dream, but only a small sure step till now

He does not even have the kind of fan following which Rajinikanth has.

Many thought and assumed – even hoped – that Tamil superstar Kamal Haasan would come out with a big bang on his birthday, November 7. But it turned out to be a whimper. There were raging rumours of the actor floating a new political party that morning, but all that he managed was a promise, a mere promise, of launching an application, MaimanWhistle, to help whistle blowers!

“There have been constant references in the media that I would be introducing an application. This could be much more than that. There is a sense of regret and discontent over things going wrong continuously. It’s time to turn this vicious cycle into a ‘virtuous cycle.’ We are acting on an idea from my book, Theditheerpom Vaa, authored about 30 years ago that addresses the concept ‘to seek and solve,’” he told a press conference on November 7. “Your whistle can also be directed towards me.”

This announcement – which came after a series of statements, including urging the people of Tamil Nadu to petition the governor on state-level corruption – was as weak and wishy-washy as his earlier pronouncements.

Let us face facts. It is not easy to enter the political arena in India, and hope to put up a good fight. Often, film stars have ventured into, what I call, gladiatorial rings, only to return bashed and bruised. Certainly, their egos take a battering. The one classic example I would like to give is that of Amitabh Bachchan, who despite being close to big political players, had to retreat and give up – maybe for ever – the idea of being a politician. 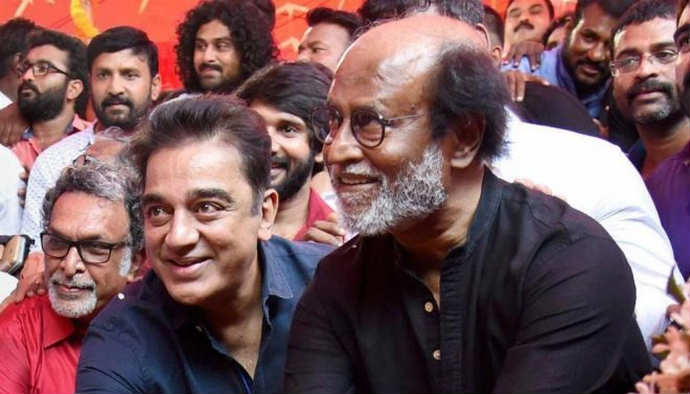 Little wonder, then, that the other Tamil superstar, Rajinikanth, has been hinting at a political career for a long time without actually taking that vital step into Tamil Nadu's administrative terrain.

We all know how murky the Indian political scenario is – given the kind of humungous corruption and sheer lack of ethics.

I am sure that men like Haasan and Rajinikanth know all this only too well, but they are probably smitten by the fact that Tamil Nadu in particular has had a history of moviemakers turning into politicians, and doing pretty well. A lot of Dravidian politics emerged through cinema with men like actor MG Ramachandran, actress Jayalalithaa and writers CN Annadurai and MK Karunanidhi transforming their ideology into votes and political power. All these people went on to become chief ministers of the state. And they wiped out the very name and existence of the Congress from Tamil Nadu.

Let us also not forget that all these chief ministers had a massive following at the grassroots. Haasan does not even have the kind of fan following which Rajinikanth has, let alone a strong support on the ground. Pray, how does he hope to win any election?

Haasan has said that he will most certainly have his own political party, and that he was conferring with experts. All this to me sounds like wishful thinking. For Indian politics – as we all know – is a game that cannot be played by gentlemen, and Kamal is undoubtedly one. Politics in this country has been – till now – a ruthless profession. And as social thinker Ashis Nandy once quipped, it is for those who have found no other job.

But Haasan has a job, and a great one at that. He can be a fine performer, that is when he is not holding the megaphone. For, when he does that, he finds it difficult to push the camera away from him!

However, in today's sad state of political uncertainly in Tamil Nadu, some feel that men like Haasan can make a difference. Political commentator Aazhi Senthil Nathan said in a media interview: “I think Kamal's intentions are clear and his attempt is very serious, unlike Rajinikanth’s. But this is not the right way to go about it. He could have joined a political party with an existing organisational set up or, if he wanted to, form his own party. But the groundwork should have begun years ago. Vijayakanth took the initiative ten years before his political debut”.

The other highly doubtful aspect of Haasan's ambition or dream is his plan to fund his political party through donations from fans. This seems rather farfetched.

Well, till the time all this gets gets translated into something real and concrete, Kamal would be seen as one sitting on a fence – probably unsure about where to land.

Post your comment
#Tamil cinema, #Tamil Nadu, #Kamal Haasan
The views and opinions expressed in this article are those of the authors and do not necessarily reflect the official policy or position of DailyO.in or the India Today Group. The writers are solely responsible for any claims arising out of the contents of this article.