From 'mass Surya Namaskar' to singing 'Vande Mataram' and visiting Sita temple in Sri Lanka: Just what Kamal Nath will do with Shivraj Singh’s legacy

Each issue has the potential to generate a controversy and become a potent poll issue ahead of 2019 Lok Sabha elections.

The Kamal Nath-led Congress government in Madhya Pradesh goofed up on Day 1 of 2019 when it failed to organise the customary singing of Vande Mataram at Vallabh Bhawan, the state secretariat in Bhopal.

Vande Mataram is sung in MP’s schools and colleges on the first Tuesday of every month. There are many contentious issues Kamal Nath needs to handle ahead of the 2019 general elections. (Source: PTI)

Nath, a nine-time Lok Sabha MP, is not new to state politics. Many, in and outside the Congress, feel the new chief minister needs to be more careful in handling sensitive issues.

For instance, during the 15-year BJP rule, several Madhya Pradesh cities were declared ‘holy’, where the sale of meat, fish, liquor and even eggs was prohibited.

The list of ‘holy cities’ includes the temple towns of Ujjain, Maheshwar, Maihar, Amarkantak, Orchha, Chitrakoot, Omkareshwar and Panna. The declaration had led to protests with Digvijaya Singh, whose son and nephew are ministers in the Kamal Nath cabinet, describing it as an “act of fascism”.

It will be interesting to see what Nath does about the issue.

But holy cities are not the sole issue Nath has to deal with. The MP government under him will also have to review the introduction of the Gita in school syllabus, Surya Namaskar, Bhojan Mantra and the previous government’s refusal to serve eggs (optional) in midday meals. The issue of a compulsorily enforced dress code for college students is also something Nath has to deal with. These are all tricky issues that seek chief minister Nath’s immediate attention with the Lok Sabha polls barely four months away. Each issue has the potential to generate a controversy and become a potent poll issue.

In 2009, Chouhan started the custom of Swami Vivekananda’s birthday — January 12 — being celebrated with doing Surya Namaskar on a mass scale. It was a move that became rather controversial. January 12 will thus be a major test for Nath. 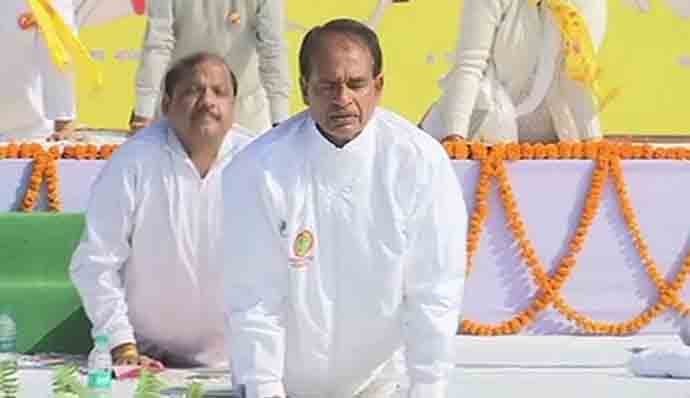 In 2012, Muslim clerics had issued a ‘fatwa’ against the move, but subsequently, many Muslim students had gone ahead with participating in it.

The Muslim and Christian clergy had argued that the exercise regimen was a religious activity as the sun was termed a god. While both Christianity and Islam consider the sun to be God’s creation, worshipping it is considered against their faith.

On Vande Mataram, Chouhan, who is eyeing the leader of the Opposition slot in the Madhya Pradesh Assembly, was quick to score a political point. “It is unfortunate that the new Congress government has ended this tradition. I demand that it should be reintroduced," Chouhan remarked while threatening to launch a stir on January 6.

The Assembly session is scheduled to start on January 7, where the new Speaker’s election, a trial of strength of sorts between the ruling Congress and Opposition BJP, will be held.

Meanwhile, Nath has denied having ordered the practice of singing Vande Mataram to stop.

In a statement, Nath said the order (directing state government employees to sing Vande Mataram on the first Tuesday of every month) is on hold. He said the practice would be reintroduced in a new form.

Nath asserted that the national song has pride of place in his heart.

“The national song is in our hearts. However, we also believe that merely singing Vande Mataram once a month is not a certificate of one's patriotism. Love for ones’ country cannot be linked to singing the national song once a month. Are those who don't sing Vande Mataram any less patriots?" Nath sought to know, while adding that the Congress believed that "patriotism is a feeling which does not require display”. Nath also needs to take a call on several ‘populist’ schemes that were initiated by his predecessor. The new chief minister has given a go-ahead to Chouhan’s ‘Kanyadan’ scheme, increasing the state’s gift from Rs 25,000 to Rs 51,000 to newly-weds.

However, there is no word on the Mukhyamantri Teerth-Darshan Yojna (Chief Minister’s pilgrimage scheme) where senior citizens were encouraged to go for religious pilgrimages on state expenses.

Under the scheme, senior citizens enjoy 10 days of hospitality free of cost, which includes train fare, meals, medicines and other expenses during the pilgrimage. Members of all faiths are encouraged to avail the scheme.

Under the scheme, an attendant can also accompany the pilgrim above 65 years of age. If one of the spouses is selected, his or her life partner can also go on pilgrimage. The life partner is permitted to undertake pilgrimage even if he or she is less than 60 years of age.

Under the scheme, the Chouhan government was doling out 50 per cent subsidy on expenses (up to a maximum of Rs 50,000) to each pilgrim. As chief minister, Chouhan had also promised to construct a huge temple in Sri Lanka near the Sita Mandir at Nuwara Eliya. According to mythological belief, it is the place where Sita underwent agni pariksha. The Sri Lankan government has agreed to give land and offered to extend other facilities.

Post your comment
#Surya Namaskar, #Shivraj Singh Chouhan, #Madhya Pradesh, #Kamal Nath
The views and opinions expressed in this article are those of the authors and do not necessarily reflect the official policy or position of DailyO.in or the India Today Group. The writers are solely responsible for any claims arising out of the contents of this article.