On Monday, January 21, 2019, California Senator Kamala Harris confirmed on ‘Good Morning America’ that she would be seeking the Democratic Presidential nomination.

Halfway across the globe, a quiet middle-class neighbourhood in Chennai would have raised their filter kaapi tumblers to toast her and crossed their fingers.

Her announcement's timing is strategic and significant. January 21, 2019, happened to be Martin Luther King Jr. Day — an American holiday honouring the slain civil rights leader, probably signifying her aspiration for change and progressive thinking in America.

Who is Kamala Harris?

Kamala was born on October 20, 1964, in Oakland, California, to a Jamaican father and a Tamil Indian mother —Shyamala Gopalan — who migrated from erstwhile Madras (now Chennai) to pursue higher education at the University of California-Berkeley in 1959, where she met Donald Harris.

The marriage — though it did not last long — gave America two brilliant attorneys and political activists — Kamala and her younger sister Maya.

Their mother, Shyamala Gopalan Harris, went on to become a prominent breast cancer researcher, and their father, Donald Harris, a Jamaican immigrant, later taught economics at Stanford. The parents divorced when Kamala was about seven years old, and the girls were raised by their mother.

Shaped by her Indian grandfather and activist parents

Kamala reportedly grew up under a significant influence — she learnt some of the earliest lessons from her grandfather, the Indian diplomat P V Gopalan, during her formative years. As children, she and her sister would travel with their mother to visit him at his home in Besant Nagar, Chennai. Gopalan, reportedly would take Kamala on long walks and impart lessons that ranged from instruction in politics and personal commitment — to poker. Clearly, the lessons were not lost on Kamala.

She went on to become California's first woman Attorney General and if everything goes well, she will be the first woman president of the United States of America.

As a child of immigrants — and socially and politically active ones at that —Kamala grew up in times of political turmoil and activism in America — the 1960s and 1970s. The influence of her parents’ political and social activism was completely imbibed by young Kamala. In her book Smart on Crime published in 2009, Kamala writes, "My earliest memories are of a sea of legs marching around the streets and the sounds of shouting.”

Once when she was a toddler, she recalls, her mother told Kamala that she was making a fuss and asked her what she wanted, "and I wailed back, 'Fweedom.' "

In an interview, Kamala’s younger sister Maya recalled an incident at a housing complex where the family lived in Montreal for a few years. Kamala, then about 13, organized the complex's children to protest not being able to play in a grassy courtyard. "It was only a matter of time before we were playing soccer," Maya says.

How is she planning to trump Donald?

Kamala enters the race with the potential advantage of being the favourite of the Democratic Party’s diverse base of young, female and minority voters.

Kamala Harris is everything that Trump is not.

Her campaign is based on real issues that concern America — and the world.

The former California state attorney general is popular for her tough questioning of Trump administration appointees and officials — including Supreme Court nominee Brett Kavanaugh and former Attorney General Jeff Sessions — Kamala’s questioning of Justice Brett Kavanaugh about his views on abortion and the ongoing investigation into alleged Russian interference in the 2016 election has made the Democrats sit up and take note.

She plans to enact the ‘College for All Act’ that would create a government funding program to pay for tuition and fees for students with incomes of USD 125,000 a year or less at public colleges and universities — it would be funded by a fee on Wall Street firms of 0.5 percent per stock trade.

Kamala Harris is an active opponent of guns and has co-sponsored the bill to ban assault weapons and the sale of high-capacity magazines. As California’s attorney general, she defended a state law that blocked gun dealers from displaying signs that show or describe handguns — a law that was later overturned. She also launched a state-wide sweep to capture firearms from anyone illegally possessing them. 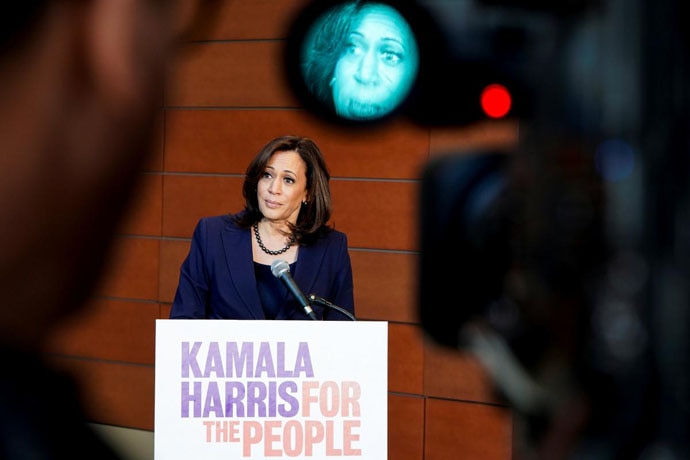 Senator Kamala Harris speaks to the media after announcing she will run for President of the United States. (Source: Reuters)

Kamala backs the ‘Medicare for All’ bill — that would establish a government-run health care system that allows every American to have access to care and end private health insurance as it currently exists. Progressively, she has also introduced bills to increase access to mental health care and address high maternal mortality rates for black women.

Unlike Trump, Kamala Harris is all for inclusivity.

She believes in ‘re-examining’ the US Immigration and Customs Enforcement (ICE) and “probably think about starting from scratch.” She was a vocal opponent of the Trump administration’s “zero tolerance” policy — which led to thousands of migrant children being separated from their families at the southwest border. She co-sponsored the ‘Reunite Act’ that aimed to reunite families separated at the border. Harris supports the Deferred Action for Childhood Arrivals (DACA) program from the Obama-era to protect young undocumented immigrants who were brought to the country illegally as children.

On social issues, she is a supporter of abortion rights, and has called for it to be legalised — voting against the bill that limited abortions to the first 20 weeks of pregnancy.

She believes same-sex marriage should be legal and supports transgender people’s position to have access to the bathroom of their choice.

She opposed the Trans-Pacific Partnership — or TPP — on the grounds that the trade deal with Asian countries did not do enough to protect either workers or environmental regulations.

Her strong views on environment policies came to light when she launched an investigation into Exxon Mobil in 2016 — as California’s attorney general — after reports that the oil giant had apparently misled the government for decades about the risks of climate change. She was a strong critic of Trump’s decision to withdraw from the Paris climate accord, and has also opposed the Trump administration’s proposal to reverse the fuel efficiency standards for cars and light trucks from the Obama-regime. Kamala voted against repealing regulations on methane emissions, and has a 100 percent lifetime score from the League of Conservation Voters — which tracks lawmakers’ voting records on energy and environmental issues.

Her campaign will reportedly focus on reducing the high cost of living with a middle-class tax credit, pursuing immigration and criminal justice changes and a Medicare-for-all healthcare system. In line with her convictions and campaigns, Kamala has said she will reject corporate political action committee money with her slogan being "For the People”.

It's girl power all the way

Clearly one to wear convictions on her sleeve, Kamala’s announcement to run for the run for president in the 2020 election comes as a ray of hope in the present American political climate.

She is the fourth woman to join the battle for the Democratic nomination after Elizabeth Warren, Kirsten Gillibrand and Tulsi Gabbard — the 2020 Democratic presidential primary will be the first time more than one woman competes for the party's nomination.

The race is already thought to be record-breaking, with four women candidates running national campaigns. It seems very likely that it will be a woman again taking on Donald Trump — we just hope it is not marred like the 2016 run when another woman lost to Trump.

But then, Harris is no Hillary — she knows what she is up against. “Let’s be honest. It’s going to be ugly. When you break things, it is painful. And you get cut. And you bleed,” Harris reportedly told MSNBC’s Mika Brzezinski during a December conference in San Francisco.

Harris’s rich mixture of heritage has led supporters to refer to her as “the female Barack Obama.”

If elected, she would be the first woman, the first woman of Asian heritage and the first African-American woman — most importantly, of Indian origin and shaped by her very Indian grandfather and mother — as President of the United States.

We wish Kamala Harris luck in her run to be POTUS.