Kanhaiya Kumar, JNU student leader and CPI candidate, spoke with Rohit E David about fighting polls in Begusarai, whether his followers are 'champagne socialists' and why he doesn't regret being called 'tukde tukde gang'.

Q. There is criticism that your supporters are all 'champagne socialists' and were basically doing poverty tourism in Begusarai — your thoughts?

Media has reported that when I had gone to file my nomination papers, there was a 12 km rally with me. In JNU, there are 8,000 students — amongst them, there's ABVP and other parties too.

Even if all of JNU comes here, still the nomination rally wouldn’t have been this much.

If I have some outside support, why is BJP so terrified? If a candidate is losing, surely you should not take him so seriously? Begusarai's people are going to vote, outsiders are not going to the polling booths. Why does Amit Shah mention me in his rallies?

Q. You have earlier touched Lalu Yadav's feet. Were you surprised to find the RJD standing against you in these polls?

Do you touch someone’s feet who is older to you considering that you will get a ticket? Have I done any awkward thing? In India, don’t people touch older people’s feet?

Don’t relate this to politics — this is elections, people are running their respective parties. This can also happen that the CPI has put a candidate against the RJD and not the other way around. I had no issue with RJD’s candidate in the election. The fight for democracy will remain after the election. 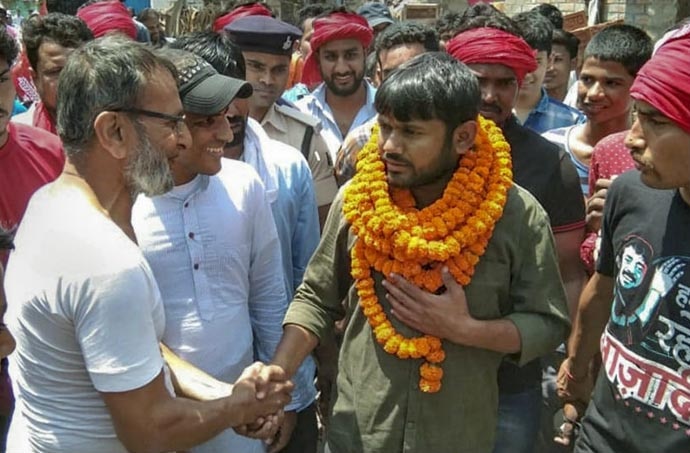 'Even if all of JNU came to Begusarai, that wouldn't account for the rally supporting me. Why is BJP so terrified of me?' (Source: PTI)

Q. We live in aspirational India which wants a good life. How does your Communist leaning gell with this?

When you raise this question, I assume that you know something about communism. What is the common man’s aspiration? They want peace, a good life, jobs, salary and that they should not stand in line — this is communism. The disparity which is there in society should not be there. This is propaganda being spread everywhere, by people who want that there should be inequality, to kill others' aspirations and make their own aspirations come true.

In France, a big movement has started (the yellow vests) because the people who are poor, economically backward there, their taxes have increased and the tax on powerful people has come down. If in a society, there is a lot of inequality, then a movement will surely take place.

Q. Your critics say owing to the Bhumihar vote factor, you have been soft on caste factions like the Ranveer Sena. Is this true?

Why would I be soft on Ranveer Sena? Any reason? In India, the making of a private army is completely illegal — whether it is Maoists or Ranveer Sena.

Taking up arms in this country is illegal. The people who want to finish casteism, those who want equality in society, they will never support such a thing.

Q. Do you regret being called part of the 'Tukde Tukde Gang'?

Tell me, 'in Maharashtra, only Marathis will stay' — who takes this line? Shiv Sena — and they have an alliance with BJP. In my view, the BJP is actually breaking this country, on caste, religious and ethnic lines.

The people who oppose them are being labeled as ‘tukde tukde’. 'Those breaking the country allege that others trying to unify this society are 'tukde tukde gang'.' (Source: PTI)

Q. What are your future plans after this election? In case you don't win, will you stay in mainstream politics?

Today, it is not easy to say that right is right and wrong is wrong — when you say that, people attack.

Q. JNU has been very critical of BJP's saffron politics. Why doesn't it ever target the soft Hindutva of the Congress?

What is soft or hard? Is this a feeling? Hindutva is Hindutva. This is a political concept which I need to understand. Any party that follows Hindutva does that, if it doesn’t, then it doesn’t...(Chaliye abhi rakhta hun…baad main baat karte hain).

#Bihar Elections, #Begusarai, #Kanhaiya Kumar
The views and opinions expressed in this article are those of the authors and do not necessarily reflect the official policy or position of DailyO.in or the India Today Group. The writers are solely responsible for any claims arising out of the contents of this article.