After much speculation, Kanhaiya Kumar and Jignesh Mevani join Congress. Here is what you need to know

Former JNU student leader and Communist Party of India member Kanhaiya Kumar will join the Congress party later in the day. Gujarat dalit leader and Independent MLA Jignesh Mevani will join the Congress party with him. Kanhaiya Kumar and Jignesh Mevani are both popular among the youth for their firebrand speeches against the Bharatiya Janata Party and Prime Minister Narendra Modi.

The buzz in Delhi suggests that Rahul Gandhi will be present at the induction ceremony. Mevani had announced last week that Kumar would join Congress with him on September 28. 4 PM:  Originally scheduled to be held on September 27, the induction ceremony has had to be postponed due to the farmers’ union call for a nationwide shutdown.

WHO: Kumar has previously been the President of JNU’s student union and up until now a member of the Communist Party of India. In the 2019 Lok Sabha elections, Kumar contested from Begusarai on Communist Party’s ticket and lost. In an interview with Aaj Tak in 2019, Kumar said that he was appreciative of the support he had received from the people against the ‘big, rich and influential’ and that this was a message to democracy that the son of an Anganwadi worker could also contest elections.

His most prominent political activities have been during the widely popular controversy over slogans raised at JNU in 2016. He was arrested and later granted bail for his participation. 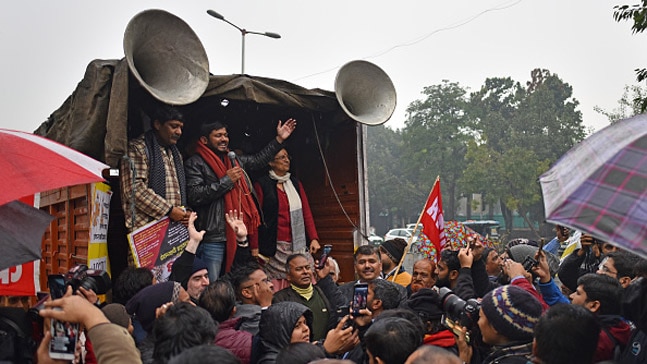 ROLES NOT CONFIRMED: It is still not confirmed whether Kumar and Mevani would be given national roles in the party or will be asked to focus on their own states, Bihar and Gujarat.

THE O: Kanhaiya Kumar and Jignesh Mevani are set to join Congress. The Congress already has Hardik Patel in its fold in Gujarat and now with Jignesh Mevani, it is eveing the youth among the Patidar and dalit communities in Gujarat. The state will vote to elect a new Assembly later next year. Kanhaiya Kumar's induction will add to the party's vocal firepower since most of its prominent spokespersons are now either tired, retired or rebelled against the party.