The great sprawling middle India, with its digital dreams and civil wars of limited benefits, just scored a self-goal.

When the FTII row was at its peak and the badgered students were on a marathon hunger strike, Pepsi released this advertisement to drive home the point that only “uncool” pupils struggled or protested against administrative sledgehammering.

The cooler ones, according its smart, shinning, fizzy understanding, are usually too thirsty and unmoored to ever commit to or comprehend the idea of higher education, or even the idea of the university.

But then, Kanhaiya Kumar happened. And Umar Khalid. And Shehla Rashid.

Kanhaiya usurped Prime Minister Narendra Modi on the day he was plastered on every front page of every newspaper in this country. The day after his impromptu speech on Azaadi in that “Commie hellhole”, JNU.

People dubstepped to Azaadi. A section of TV and print journalists, often branded as “sickulars” by social media stalkers, swooned. Others, more befuddled than mersmerised, grudgingly accepted that India had a soft spot for great orators, be it Narendra Modi or a 28-year-old PhD scholar born in Begusarai.

Obviously, when this spoof on Kanhaiya’s Azaadi speech rephrased Hotel California by the Eagles taking social media by storm, we should have known that we are right in the vortex of Kanhaiya’s mainstreaming.

But that still was just social media. And trends on it as are as ephemeral as quantum fluctuations.

However, what is the most definitive proof of the full-fledged blossoming of a niche phenomenon? When it has one foot in politics while the other is squarely in popular culture.

And what’s more pop than the batshit crazy world of advertisement? It’s as neoliberal, as consumerist, as half-baked, as flimsy, as ahistorical, as unstuck, as Bollywoodised, as self-parodied as it can be.

Presenting, Yatra.com’s latest commercial, spoofing, you said it, the one and only, JNUSU president Kanhaiya Kumar, complete with the "vernacular accent" and all.

It’s literally a window of opportunity, for Kanhaiyaphiles and Kanhaiyaphobes alike, to wrack their brains on how is it that this bearded chappal-sporting, Munirka-jacket-wearing, leftist, AISF member became so, so freaking central to our understanding of the youth today.

No matter which ideological camp you belong to, this clever advert will make you laugh. Or at least smirk at the utter disconnect between Sanskritised travel guidance online platforms that want you to experience orgasms of discount, yet which go ballistic over reservation, the academic and professional discount for the historically-oppressed. Or, in Yatra.com parlance: those too far behind in the queue, scraping the bottom of the waiting list barrel.

Obviously, this "window seat" metaphor and its self-congratulating creators care little for the fact that even the memory of say a Rohith Vemula, let alone his lonesome journey from one waiting lounge of hopelessness to another, is under threat now. A window seat for Rohith, who wanted to be a Carl Sagan, was simply not available.

Still, the whole point of humour is trivialisation. Parody is always about pricking that bloated (self)-importance balloon, and not even Kanhaiya, with all the current tele-glare and headline hoarding, is immune to it. Kanhaiya Kumar at JNU after his release from police custody.

So, doing a Yatra.com on Yatra.com, let me state the following:

a) That clamour for the window seat: that’s India’s impatience for insta-development. It’s development as the placebo pill. It’s delusional, because just like there are fixed number of window seats, and no online platform, no matter how well-heeled and well-greased, can ensure that EVERYBODY gets the window seat, there’s no insta-development. And mostly, like those fixed number of window seats, that give you seamless views of glorious skies, development has been so far only for a limited few, at the expense of a huge, diverse othered demography. True, window seats are going up, because airlines are going up, but that’s still leaving out a double/triple number of middle and aisle seats, in other words, those settling for less, those falling through the cracks, and then those increasingly disenfranchised in this rat race of development.

b) Azaadi from sloganeering: or as Yatra.com would have us believe, demanding Azaadi, or any such display of group solidarity, is unsmart, un-partaking of the technocratic utopia that it wants us to inhabit, at least mentally. Rich is the observation that is so bathed in the privileges taken for granted for so long. If you haven’t had the need to identify with even a single slogan ever, if nothing has at least touched your soul if not come out from your mouth, it’s likely your blinkers are hardwired into your very being, and that being’s political justification is to ensure exclusion, a humungous exclusion of many, many “different” beings.

c) Azaadi from Azaadi? This is being self-defeatingly meta. You can be endlessly self-absorbed in your hall of mirror parlour tricks, and your smart-alec one-liner is sure to win you a few claps, or awws, during those happy hours at Monkey Bar, or whichever bar & bistro your cohorts want you to head to. But you are no agent of change. You are no agent of any thing, actually. You are a cog in the wheel, surely a bigger cog in a bigger wheel that for many is the grind. But you are only that. You are eminently substitutable. You are a replicable, replaceable little unit of discrimination, merely a means through which prejudice gets birthed again, and again. You are a Chinese Whisper of cooption. You are certainly not a dreamer, not a legislator of a world without hierarchies. You live off hierarchies, and are mortally afraid anything that threatens your plum place in somewhere in the middle of the top nowhere. 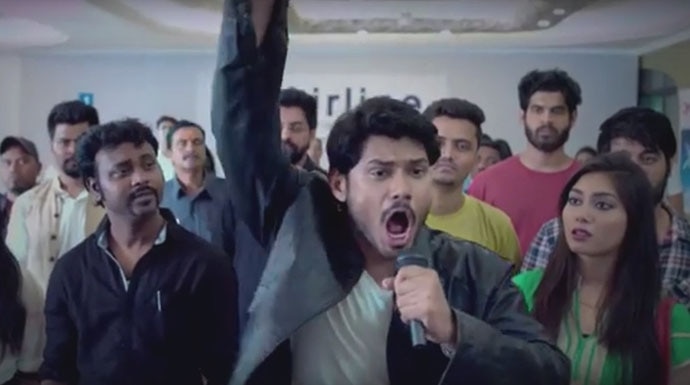 It might appear counter-intuitive, but Yatra.com and the advertisement agency it hired to make this Kanhaiya spoof, are actually mocking, to borrow an unwitting phrase from the redoubtable Shashi Tharoor (who incidentally, has hailed Kanhaiya as a contemporary Bhagat Singh, ergo, a "Marxist revolutionary"), the “cattle class”. [Yes, this "gaffe" by Tharoor never seems to stop tailing him, despite many a corrective step, including the brave attempt at introducing the three private member Bills only to face rude legislative rebuffs and bipartisan homophobia.] Only the economy-walas need to hanker for the window seat; for the business classes, aisle access trumps postcard sky views, starry skies can be drowned in complimentary pegs of premium Scotch.

The great sprawling middle class, with its starry digital dreams, and civil wars of limited benefits, is laughing at itself.

Divide and drool. Fly and fool.

#Azaadi, #Middle classes, #Air travel, #Kanhaiya Kumar
The views and opinions expressed in this article are those of the authors and do not necessarily reflect the official policy or position of DailyO.in or the India Today Group. The writers are solely responsible for any claims arising out of the contents of this article.