While corruption proved to be a non-issue, it was obscene money and big data that ruled the Assembly polls.

As early trends started to trickle in on May 15, it was clear the BJP was making gains. A couple of hours later, the saffron wave crushed past the Congress, proving an overwhelming number of opinion and exit polls wrong. But what and who actually mattered to the voters, and why?

That the BJP named BS Yeddyurappa, who once quit the party after he was forced to resign as the CM amid a blaze of corruption charges, in a way proves corruption that was a non-issue this elections. The BJP also gave eight tickets to the infamous Reddy Brothers of Bellary mining scam and their friends. One of them, B Sriramulu, is expected to play a major role in a BJP government. 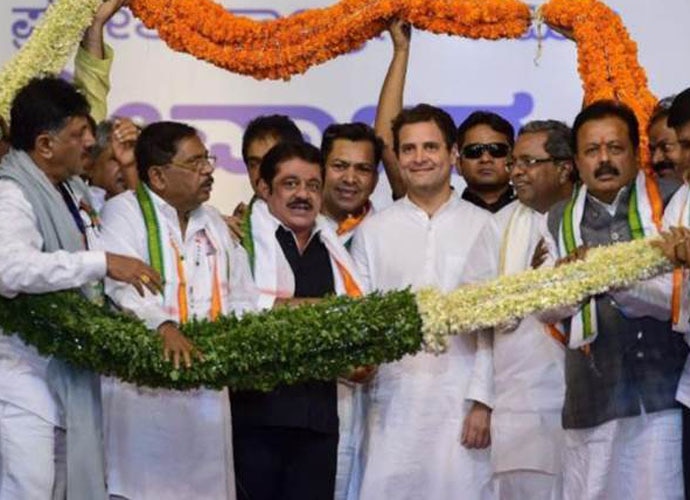 It is important to note that CM Siddaramaiah's welfare measures didn't cut much ice in the face of caste and communal politics. Siddaramaiah's measures ensuring foodgrains and cooked food for BPL families supporting more than a crore people of the state, failed to translate into votes.

The Siddaramaiah-led Congress in the state ran a campaign on the lines of "Bihari versus Bahari model" of Nitish Kumar of Bihar in 2015, but failed to have a similar effect. Even though he tried hard to capitalise on slogans like "BJP is a north Indian party" or "affluent south Indian states are funding regressive north Indian states", all this eventually seemed to have failed to overpower the Modi wave. Even his Lingayat card, caste rooting for a separate state flag, and leading a tirade against BJP's alleged Hindi imposition, did't seem to impress the voters much.

Although Siddaramaiah is known to have worked extensively throughout his five-year term to consolidate the AHINDA (minorities, backward classes and Dalits) votes, this too seemed to have got divided between the Congress and the JD(S)-BSP combine.

Also, Siddaramaiah's overtures to the Lingayat community (recommending a separate religion status for them) also didn't seem to yielded much results. While the Lingayats make up almost 17 per cent of the state's population, they have an influence on nearly 100 seats in the 224-member Assembly. The Congress was desperately hoping that its "separate status for Lingayat" will help woo the voters away from Yeddyurappa, who is a Lingayat strongman.

However, as the trends show, the Lingayats were not too pleased with Siddaramaiah. 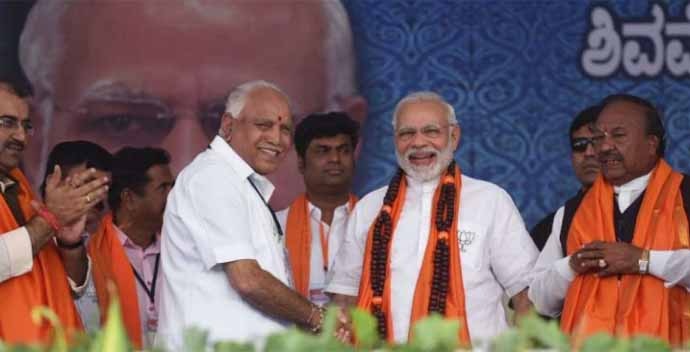 The Vokkaliga-Dalit combine, meanwhile, seemed to have worked for the JD(S) and allies. Although Karnataka has witnessed a triangular contest at the macro-level, the contest at the ground level is more or less between the Congress on the one side, and the BJP and the JD(S) on the other.

This is due to the social and geographical distribution of the political influence of the BJP and JD(S). The BJP is popular in north and central Karnataka while the JD(S) is strong in the Old Mysuru region and southern Karnataka. While BJP enjoys the support of Lingayats despite Siddaramaiah wielding the separate religious identity card, the Vokkaligas seemed to have rallied behind the JD(S).

Thus, the BJP and the JD(S) are not competitors in state. There also seems to be an undeclared understanding between the two. The BJP reportedly fielded weak candidates in at least 40 seats where the JD(S) had winning chances against the Congress. The JD(S) reciprocated with a similar choice of candidates in more than 55 seats.

While money and muscle power have been ruling Indian elections for long, more muscle was added to this by the coming of the hi-tech armoury. This was also the first election in India after the Cambridge Analytica fracas hit the headlines.

To simplify the big data approach, if a party (or a candidate) has a good idea of the political views and likes/dislikes of as many voters as possible, it can use this information to fine-tune its own outreach to voters and influence their votes, and a new ploy like this can indeed decide the outcome when elections are won and lost over a margin of a few thousand votes.

So, while muscle power was replaced by data power – at least in India's Silicon Valley - social media engineering substituted social engineering. Even though TV debates raged on loudly, it was the bellicose battles fought and won on WhatsApp, Twitter and Facebook-owned messaging app that seems to have left a major impact this elections. This also provided an unfiltered platform to fake news and religious hatred.

And coming back to the money aspect and the gullible voters, this was arguably also the costliest election in India so far with all parties collectively spending around Rs 9,500 to Rs 10,500 crore.

In the long run

Karnataka marks the beginning of a new trend in politics — the tendency to treat voters like robots who respond to a software programme through remote control. Voters, in this scheme of things, are reduced to puppets on strings. Armed with all the relevant information about him or her, geeks were out to manipulate their behaviour. In any case, voters’ intelligence may not be a match for artificial intelligence backed by the razzmatazz of the money power. Pushed into a corner were the issues that actually mattered to the ordinary citizens — corruption, welfare measures, peace, infrastructure, farmers' woes etc.

But does anyone care? Sadly, it seems not even the voters.

#Congress, #BJP, #Karnataka Assembly polls
The views and opinions expressed in this article are those of the authors and do not necessarily reflect the official policy or position of DailyO.in or the India Today Group. The writers are solely responsible for any claims arising out of the contents of this article.