Almost every opinion poll suggests the contest is neck-and-neck.

The political heat in Karnataka is rising as the polling day - May 12 - is approaching. Given the fact that it is one of the only two major states where Congress is power - the other being Punjab - and matters for the BJP to spread its presence in south India, the election is a high-stakes battle. Here's what makes this election significant for India's political history.

The first look at Karnataka Assembly poll scenario tells us that it is decidedly a triangular contest between chief minister Siddaramaiah-led Congress and Narendra Modi-Amit Shah-led BJP with a back-to-wall fight by HD Kumaraswamy-led Janata Dal (Secular).

A resurgent Congress is indeed facing a stubborn BJP and a secretive JD(S), and Karnataka polls today present an inflexion point in the state's politics.

Prime Minister Narendra Modi has recognised the challenge facing the party in Karnataka. It is for this reason that his campaign has turned into a talking point for his own development agenda and a sharp attack on Rahul Gandhi.

BJP is being made to work very hard to win the election. This is clear from its choice of BS Yeddyurappa as its chief ministerial candidate and G Somasekhar Reddy - one of the controversial Reddy brothers - as its candidate from Bellary. The family that epitomises corruption, monopoly over natural resources, extravaganza, crime against opposing forces, stands accused of harbouring a personal army and suppressing any news against them is today funding the BJP and has been given eight seats to contest in Karnataka. These choices undermine the BJP's stand against corruption.

Also, local factors have become relevant again. The Modi mantra no longer enjoys the same spell that could make everything else irrelevant to the voter. Caste, regional factors, candidates, everything that mattered before the Modi era, has assumed renewed important. 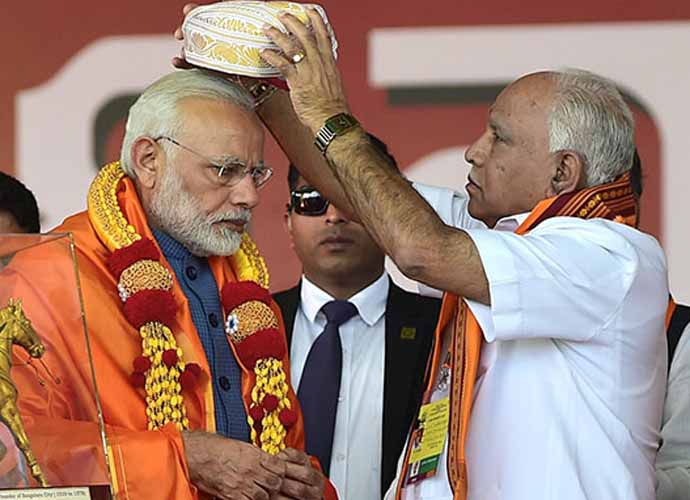 With his son being overlooked for the elections by the BJP high command, Yeddyurappa is fighting this election with his hands tied. He does not have the kind of clout within the BJP that Siddaramaiah has within the Congress. Siddaramaiah got his way with changing his constituency from Varuna to Chamundeshwari, getting son Dr Yathindra nominated from Varuna and then getting a second constituency in Badami to contest for himself. Yeddyurappa in contrast, doesn't enjoy the same elbow room despite being a chief ministerial candidate.

Another significant aspect is that the BJP high command has decided the narrative, focussing on the Hindu-Muslim divide and nationalism while Siddaramaiah has championed the cause of the Kannadiga regional identity to blunt the Hindi and Hindutva card, and declared Lingayats a minority religion.

Interestingly, unlike the BJP leaders in Uttar Pradesh and Gujarat, who have an unflinching faith in Narendra Modi, many in Karnataka BJP are not too sure. CP Yogeshwar, who is contesting on a BJP ticket, says the PM may be effective in Lok Sabha elections but not so much in Assembly elections because the party has not fielded the right candidates, and Modi's charisma is limited in the state.

The BJP may boast of "Mission 150", but on the ground, a direct Congress versus BJP fight is only expected in about 160 constituencies out of 224. In the remaining 60-odd seats, it is a Congress versus JD(S) battle. So for the BJP to get to the simple majority mark of 113 on its own, it would need a lavish strike rate. Hence, with Siddaramaiah employing the Kannadiga identity card effectively, Modi is projecting JD(S) patriarch Deve Gowda as the tallest Kannadiga leader, a Bhishma Pitamah of sorts. With Yeddyurappa unable to blunt Siddaramaiah's Kannada pride, Modi is trying to tap into Gowda's stature much to the discomfort of the Gowda father-son duo.

In an ideal world, the "secular" Congress would have been the natural ally for the JD(S). But with the personal equation between Siddaramaiah and his mentor Deve Gowda at its worst, an arrangement can be virtually ruled out.

The bigger picture is that Modi's overreach of Gowda is a virtual admission of BJP's fears. That it is no longer sure about getting a majority on its own.

With regards to its manifesto, BJP state in-charge Muralidhar Rao has listed out comprehensive resolution regarding farmers' issues, "radical" welfare declarations and programmes among the priorities. Apart from state manifesto, it has drawn up constituency-specific manifestos as well. 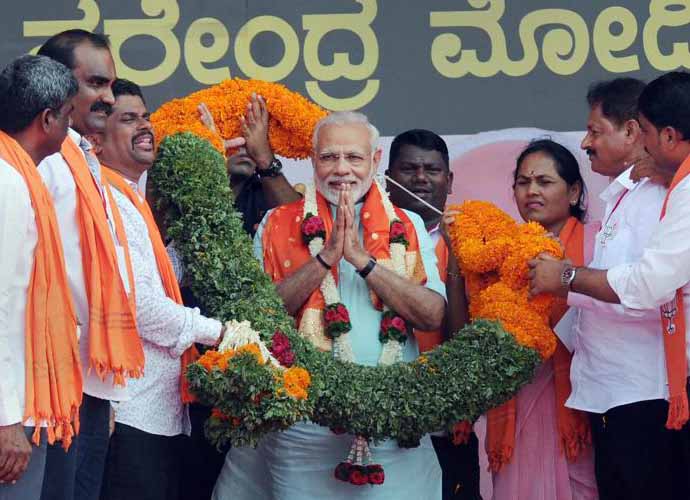 Congress: What to showcase? What to combat?

By dubbing BJP leaders like Modi, Shah, Yogi Adityanath, Rajnath Singh and Sushma Swaraj as "north Indian" imports, CM Siddaramaiah has projected himself as the sole protector of Kannadiga interests. He knows that during the campaign, the BJP will attempt wrapping the party in the Tricolour and play up a nationalistic brand of politics.

This is Siddaramaiah's way of ensuring even the voter wears his Kannadiga identity on his sleeve. Siddaramaiah with his ears to the ground is also playing to the gallery. He is aware of the sense of resentment at how Kannada is being pushed to play the second fiddle to Hindi even in Karnataka, like in exams conducted by central government departments. This is what resulted in activists defacing signage at Metro rail stations in Bengaluru in 2017, spraying paint over the names of the stations written in Hindi.

For the record, the Congress manifesto promises to create at least 15-20 lakh jobs each year in the state and provide programmes for skill development, encouraging entrepreneurship and increasing youths' employability quotient.

The party also promised to provide free education to all students from grades 1 to 12 across all the state-run schools in the state. Currently, the state gives free elementary education to all children from classes 1 to 8 in state-run and government-aided schools.

In a two-party landscape, JD(S) hopes social media and its grassroots connect will give it an edge. "Ours is a positive campaign. It was a clear-cut instruction from the leadership. Congress and BJP are busy running each other down," claims the social media head honcho of JD(S).

The challenge for the party would be to hold on to it, and get the incremental vote that would make former chief minister HD Kumaraswamy at least the kingmaker, a scenario opinion polls say could emerge.

However, it will be easier said than done. In an increasingly polarised and divided election, the third party is often marginalised. The Congress is selling the JD(S) as BJP's B-team of sorts, and the fact that Kumaraswamy allied with BJP to be chief minister in 2006 does not help.

He has also been accused of being autocratic in running the party and recently lost seven sitting MLAs as they defected to the Congress.

The JD(S) is thus fighting a do-or-die battle. A third successive defeat in Karnataka Assembly election would hit the party's relevance in the state hard. It is imperative for Gowda and Kumaraswamy to be kingmakers in a hung Assembly scenario to grab a share of the power pie. The JD(S) for all its talk of being an independent regional entity, shares power with the Congress in the Bengaluru municipal corporation. But in Mysuru, the city corporation has been ruled jointly by the JD(S) and BJP for the past four years. In fact, this January, rebel Congress candidate B Bhagyavathi was supported by the BJP and JD(S) to be elected mayor of Mysuru.

That the Karnataka election is turning out to be a close fight for the Congress is evident in both the pre-poll surveys and the mood on the ground. Almost every opinion poll suggests the contest in Karnataka is neck-and-neck. Pollsters predict the two main rivals are separated by just a few seats in the 224-member Assembly with JD (S) being the potential kingmaker with around 30 seats.

There are also a few smaller forces in the fray. Darshan Puttannaiah of Swaraj India is being supported by the Congress and a known farmers' leader. Aam Aadmi Party state convener Prithvi Reddy supported by former Lokayukt justice Santosh Hegde and former IAS officer Renuka Viswanathan from Shantinagar and Dalit leader Bhaskar Prasad from Mahadevpura constituencies as AAP candidates are giving a tough fight to their opponents.

These opinion polls are important trends and, if vindicated by the results, may have far-reaching consequences on the next round of elections in India. Next up are Rajasthan, Madhya Pradesh and Chhattisgarh polls, where caste equations and local factors were important electoral factors before Modi changed the rules of the game. In all these states, the Congress is the BJP's main adversary. Its leaders would be sanguine about their chances in the elections because of "normalisation" of Indian elections.

Both in Rajasthan and Madhya Pradesh, the BJP needs the Modi factor to neutralise caste equations and mounting anti-incumbency. All recent by-elections here have gone in favour of the Congress. But the BJP seems to stand strong in Chhattisgarh. It needs the momentum from victories in these two crucial states to carry it into the battle for Lok Sabha. If India's politics is about to hit its inflexion point, as Karnataka suggests, 2018 and 2019 promise some really tough and tight contests.

In a state that is 84 per cent Hindu and 13 per cent Muslim, the BJP has determinedly attempted to make the election about a supposed assault on Hindus by a Congress government whose politicians are mostly Hindus.

Of the 497 candidates contesting the elections, no more than 4.6 per cent or 23 are Muslims (15 from the Congress). If the BJP wins Karnataka - either through an alliance with the JD(S) or by itself - the false Hindu-under-siege narrative may grow in volume and self-assurance in the run-up to the 2019 Lok Sabha elections. If it loses Karnataka, that refrain may lose cachet and confidence - or the BJP may attempt to make its message more extreme.

Either way, India is unlikely to be the same again. Karnataka, for once, seems to have assumed national significance disproportionate to its size and population.

Post your comment
#Opinion Polls, #Yeddyurappa, #Siddaramaiah, #Karnataka Assembly polls
The views and opinions expressed in this article are those of the authors and do not necessarily reflect the official policy or position of DailyO.in or the India Today Group. The writers are solely responsible for any claims arising out of the contents of this article.