Karnataka’s decision to refuse to release Cauvery water, to protect its irrigated summer paddy, will have an adverse effect on the standing Kuruvai paddy in Tamil Nadu, intensifying this property dispute of sorts.

On June 3, Karnataka water resources minister DK Shivakumar lamented on the “very bleak” water situation in the river Cauvery. According to a news report “the combined live storage in all four reservoirs [of the Cauvery basin]… is 13.93 tmcft as against their full live storage capacity of 104.55 tmcft.”

If the south-west monsoon fails to arrive before June 12 (the date when water will be released to the Mettur dam in Tamil Nadu), it is highly possible that Karnataka will fail to release water to Tamil Nadu.

Who owns the water?

Karnataka’s decision to refuse to release water, to protect its irrigated summer paddy, will have an adverse effect on the standing Kuruvai paddy in TN. The Cauvery water dispute can be construed as a conflict over the definition of property rights. The three extreme principles of water allocation based on divergent definitions of property rights are Harmon, History and Hobbes. The Harmon doctrine states that the primary rights of water are bestowed on those owning land at the source of the water. History confers primary rights to historical users of water irrespective of their geographical location. Hobbes identifies rights as the final result of awards obtained through negotiations.

Downstream, Tamil Nadu has been advocating its rights in terms of history, given the precedent of water use, especially in the delta regions. Upstream, Karnataka has been exercising the Harmon doctrine by maintaining that a downstream state cannot make a claim when there is a scarcity and inadequacy the upstream. The conflict gets amplified by the fact that the subject of waterfalls in the state list, subject to the provisions of Entry 56 of List-I, ie Union list, of the Indian Constitution. Even the provisions of the Interstate River Water Disputes Act, 1956 and its subsequent amendment in 2002, merely talk about setting up tribunals for adjudication. One can see that the Hobbesian model of negotiations is failing. In a departure from this thinking, the Supreme Court in its 2018 order has observed that Cauvery river water was a “national asset and no single state could claim ownership over it.”

A key reason behind the conflict is the government’s incentives for paddy cultivation, to promote ‘food security’, in terms of promoting production and procurement of water-intensive paddy and wheat.

The incentives include increasing the minimum support price (MSP) of paddy at a much faster rate compared to that of drier crops like millets.

It is well-known that MSP for rice and wheat, where government agencies like Food Corporation of India play a role in procurement, creates a reference for market prices. In the Karnataka part of the Cauvery basin, ragi used to be a prominent crop till the 1970s.

However, as the relative market prices (or ‘terms of trade’) moved in favour of paddy, the farm community also shifted acreages from ragi to paddy, leading to a spurt in the agricultural area for paddy in the 1980s and ’90s, especially for the irrigated summer paddy of Karnataka. The water requirement of paddy is almost 10 times that of ragi. Karnataka’s late spurt in irrigation development sped this process. 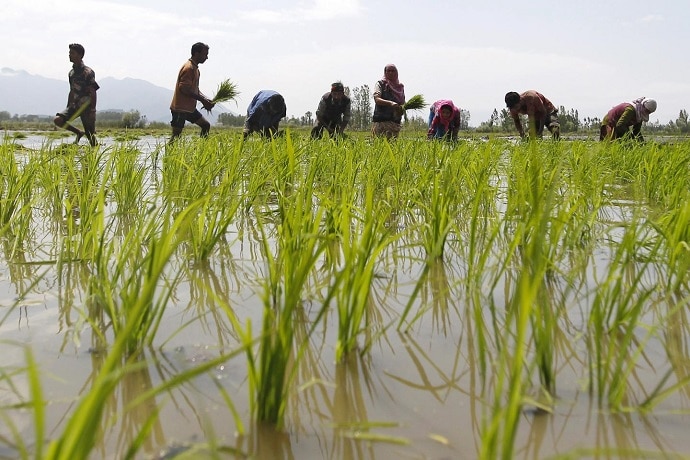 The water requirement of paddy crops is almost 10 times that of ragi. (Photo: PTI)

In 2018, the Commission for Agricultural Costs and Prices (CACP) increased the MSP of ragi by around 50 per cent, and for paddy by merely 5 per cent, in a bid to promote dry crops. Over the last 15 years, the trend in the ‘terms of trade’ has reversed from what it was during the 1980s and ’90s. In addition, while the acreage of paddy has turned flat with time, the acreage of ragi in the Cauvery has increased. However, the change is too small to substantially change water use. The change may become perceptible if the government also procures ragi at MSP.

The idea of transferring ‘surplus’ water from river Godavari to Cauvery is ecologically disastrous. It is not viable economically and it will escalate the conflict between states. ‘Surplus is defined in pure arithmetic hydrology terms by government engineers. According to the scientific knowledge of the basin ecosystem, there can be no surplus water as every drop of water has an ecosystem function in the basin.

Secondly, the definition of the surplus will not remain stable under arithmetic hydrology. Moreover, Cauvery water is primarily needed for agriculture during the pre-monsoon months, a time when even the Godavari goes dry in certain stretches! So, the cost of interlinking rivers outweighs the project’s proposed benefits.

Supply-side interventions in the Cauvery river basin under the engineering paradigm, in place since the era of British rule, have brought the conflict to its current state. Demand management of water through crop diversification should be key to keep water instream for the languishing delta ecosystem, which is affected by salinity ingression due to rising sea levels, as freshwater flow gets depleted. Irrigated paddy should make way for ragi! A gradual change can be brought about through incentives, awareness, an interdisciplinary knowledge base and holistic basin governance. However, the formation of the ‘engineers-only’ Cauvery Management Board does not augur well for the Cauvery water dispute.

Also read: Sowing a different narrative: This is why, despite severe agrarian crisis, Maharashtra farmers still voted for Modi